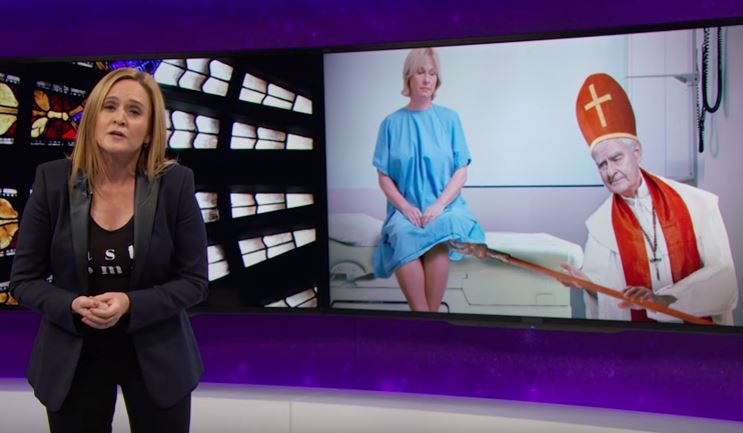 Samantha Bee, who has a half-hour “comedy news” show, made headlines when she did a segment viciously attacking Catholic hospitals around America. Her premise is that there are too many Catholic hospitals in America, which is a bad thing because the celibate men in charge are guilty of extreme misogyny insofar as the hospitals will not perform abortions or sterilization procedures. Here, see for yourself (WARNING: Extremely vulgar language and savage abuse of men in the Catholic hierarchy):

I won’t bother to address the doctrinal charges Bee makes, or the facts missing from her narratives, because Alexandra DeSanctis already did it for me. The one thing DeSanctis’s post doesn’t address to my satisfaction is Bee’s claim that the Church really believes that it’s better to see both mother and baby dead than to sacrifice the baby (who would die anyway) if it means saving the mother. That really doesn’t sound right. If you have different, or more complete, information I would appreciate hearing it.

Pushing aside the doctrinal questions, the core problem that I see with Bee’s narrative is her failure to address why there are suddenly so many Catholic hospitals (around 600) throughout the United States. Knowing the answer to that question, I understand why Bee ignored it. You see, the answer is — Obamacare. Beginning shortly after Obamacare went into effect, hospitals (the ones that Obama promised people could keep) could not function in the marketplace:

A number of acute-care hospitals closed across the United States last year — 18 to be exact — and experts who see a raft of new regulatory processes being heaped upon the healthcare industry in the coming years, thanks to the Affordable Care Act, believe that a wave of additional closures are ahead.

As noted by WorldNetDaily, a dozen more hospitals have closed in the U.S. so far this year in rural areas alone; more are getting ready to be shuttered. But Dr. Lee Hieb, M.D., says this is just the beginning.

That quotation is from 2014, but the hospital hemorrhaging begin before then and hasn’t stopped. It’s also not limited to rural areas. Just this summer, the New York Post wrote about the deleterious effect Obamacare was having on urban hospitals:

According to a new Independent Budget Office report, hospital revenues are plummeting, thanks to funding cuts required by the Affordable Care Act and a decline in Medicaid patients. At the same time, costs are soaring, leaving the system with a cash shortfall of $6.1 billion for 2016-20.

Next year, the feds will begin cutting subsidies to hospitals that serve the uninsured — based on the fanciful, self-serving assumption that most of those people now have coverage. Thanks, ObamaCare.

Yet in New York, many uninsured patients are illegal immigrants, ineligible for financial assistance under the ACA. They’ll likely remain uninsured, even as they use city hospitals and drive up their costs.

The Catholic hospitals, whether because they’re buying failing hospitals or are the only ones left standing when other hospitals finally fail, are filling the void that Obamacare has left behind, especially in smaller, rural areas in which it was difficult at the best of times to support two full hospitals. Obamacare has driven out the hospitals that once would have done those abortions or tubal ligations.

Oh, and one other thing, something that falls into the “lies, damn lies, and statistics” category: If you’re not a very visual person, and listen only to Bee’s words, she makes the Catholic hospitals sound like kudzu which takes over everything. Thus, in the chart she shows near the beginning of her monologue, those states with the most Catholic hospitals are in bright red. “Danger, danger, Willhemina Robinson! Catholic Churches have taken over! You won’t get your life-saving abortion in this state!”

If you look at the chart more carefully, though, what you see is that, even in those states with the worst “Catholic hospital kudzu,” around 70% of those states’ hospitals are not Catholic. After all, given Bee’s animus, if she and the ACLU (which made up that “you’d better be scared” chart) could have claimed that significantly more than 30% of a given state’s hospitals are Catholic, they would have:

I know it’s a distasteful proposition, but you should make yourself watch the whole video one more time, except that every time Bee refers to the church, the Bishops, the doctrine, or something else related specifically to the Catholic faith, mentally substitute a parallel word for the Islamic faith — and then ask yourself whether this woman who’s so proud of herself for slinging smut at priests would have shown the same pride and courage if she were picking on an imam and Muslim institutions. (And of course, ask yourself why there are no Muslim charitable institutions that serve the whole community . . . but yes, that’s a different issue entirely.)

If it’s true that the Catholic Church would rather let both mother and child die than save the mother (assuming the child would inevitably die) . . . well, I have a problem with that. Otherwise, the real problem is that Obamacare created a vacuum, the Church filled that vacuum, something that deeply offends those wedded to Obamacare. And that’s what Samantha Bee’s loathsome little piece of anti-Catholic propaganda is all about.