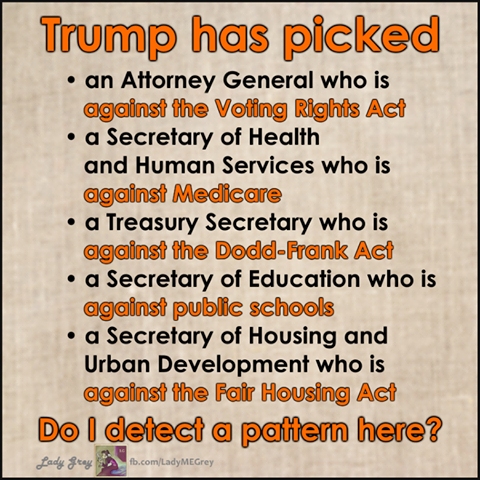 This is one of the angry Progressive-generated posters that has appeared a few times on my Facebook feed:

I originally was going to write a convoluted post about each agency’s original mission and the fact that Trump’s picks will return the agencies to those missions. Then I read Kevin Williamson who, in one slashing paragraph, ridicules to death the Progressive horror about those same truly excellent cabinet picks (picks more conservative than anything McCain or Romney would have done):

The non-negotiability of progressive victories is going to be a large factor in Senator Chuck Schumer’s resistance to various Trump cabinet picks. The sophistry already has begun, with Democrats arguing that no one can lead the Department of Education or the EPA or Department of Labor unless he signs off on the progressive version of what that agency should do. So if you think that the present federal role in education is excessive and ought to be reduced, or that the EPA’s boot is a little too heavy on the neck of American industry, or that a federal court was right to put the brakes on the Obama administration’s daffy overtime rules, then you cannot lead the Department of Education, the EPA, or the Department of Labor. Which is to say, these departments exist, in the progressive view, only to pursue progressive policies.

I can’t add much of anything to that. Over the years — long before Obama, but with escalating fervor under Obama — Progressives have taken each federal agency and bent it to the Progressive agenda. It’s time to unbend.

To the extent the Department of Education is about “education,” and the metrics all show that American education is in decline, maybe it’s time for a new approach that isn’t invested in the principle that the only good education in a union-led education. And maybe “fair housing” is an inaccurate term when people are mired in perpetuity in government-controlled ghettos. And perhaps Dodd-Frank is part of the problem with the most sluggish American economy since the 1930s.

So, yeah, I too detect a pattern in Trump’s appointments — and think it’s a really good pattern. This is one of those Progressive posters with which I totally agree, not that the Progressive who drafted it would thank me for doing so.