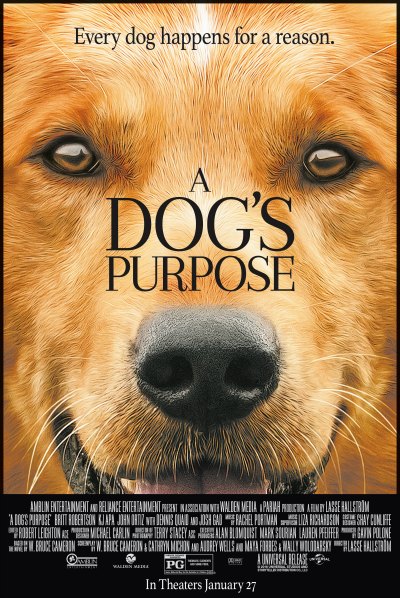 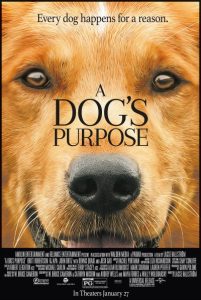 A quick re-cap on who I am, the Closet Conservative (Movie) Critic. I’m a graduate of the USC film school, and worked in Television and on Motion Pictures in Los Angeles for 12 years before returning to my roots of Marin County. I was a typical Hollywood/Marin Liberal most of my early life. Gradually, on my way to the age of 40, I began to swing slightly Right.

I was 41 years old on September 11, 2001. Within a few months, I had completely gone to the political Right. Although most in my family, and closest friends know I’ve “come out,” I still walk very quietly and remain in the closet for the better part of my days. In my recurring movie column, it’s my intent to enlighten fellow conservatives to movies that are not only good and bad, but also movies that sneak in little digs and insults to conservatives and conservative values OR, on the flip side, have no shame in presenting good, wholesome conservative traditions and values.

This week’s movie: A Dog’s Purpose

As Mr. Potter once said in “It’s a Wonderful Life, “Sentimental Hogwash!” A Dog’s Purpose is sentimental hogwash — and I loved every minute of it. For those with traditional values and a love of their dog, how could this movie not resonate?

The movie’s received mostly negative reviews from critics, but I can only deduce that they are cynics and/or not lovers of dogs. Sure, the movie enters into the world of clichés of “Small town, American Values” and “simpletons working on the family farm,” but it’s also got the charm and humor of a great episode of Mr. Ed. (Not sure if that’s a selling point but as kid I thought Mr. Ed was hilarious!)

From a political standpoint, A Dog’s Purpose is about as clear of politics as one can be. No assaulting the senses or belittling those from small towns or those who hold more traditional values.

The movie also has romance on the level of a teenager, and the amount of intimacy they demonstrate could probably get by the 1960’s sensors of CBS television – very tame. There is a traditional approach to romance, which is that is boys and girls are meant for each other and the color of their skin is irrelevant.

There is one angle of the story which features a college-aged black woman. She is lonely and eventually falls in love, thanks to the dog she has adopted. When she finds another man who clumsily approaches her a few times, we are touched and the story line never mentions their skin color. Quite refreshing, and when they did discover each other, I was moved to tears of joy.

Don’t expect it to be on the level of E.T., Gone With The Wind, or Dr. Zhivago, but it is a movie that will move you and make you smile.