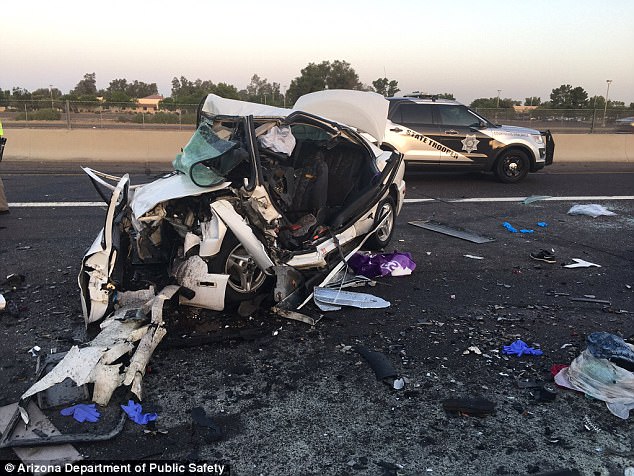 As drivers, we can too easily cause someone else’s traumatic death. As people of conscience, we must drive with relaxed rigor to avoid that outcome.

The other day, I had an inconsequential, but extremely painful and somewhat sanguinary medical procedure. Although I was practicing deep breathing and thinking happy thoughts in an effort to get through the procedure with a minimum of fuss, my body had a different idea. It interpreted the cutting and blood to mean only one thing: Unless it acted immediately, I was going to die. To that end, my body instantly withdrew all the blood in my extremities back into my torso to protect my internal organs and it had me start throwing up to rid itself of any poisons. My body’s response was every bit as unpleasant as the procedure itself.

I’ve been watching PBS’s six-hour American Experience documentary about America’s participation in WWI. All three episodes have made extraordinary use of contemporaneous still photos and — something entirely new at the time — movie footage. Seeing those vital young men march happily off to war confident that, despite the bloodbath of the preceding four years, they could emerge unscathed is disconcerting to say the least. And of course, while modern filmmakers are loath to let us see the effects of Islamic terrorism against the West, this documentary is filled with shots of dead British soldiers, dead French soldiers, dead German soldiers and, eventually, dead American soldiers.

About a month ago, I watched a movie I didn’t like — I prefer plot driven movies, while this was all about emotions — but I found in it a compelling underlying message. The movie was Rabbit Hole, about a young couple still struggling nine months after their only child was hit and killed by a car. It’s not a bad movie; it’s just not my kind of movie. In the event that you want to see it, I won’t give away any of the plot except to say that it makes you think how extraordinarily vulnerable a child’s body is when hit by a large object.

For the past two days, the news has been filled with the desperately tragic story of former NFL player Todd Heap, who accidentally ran over and killed his own three-year-old when he was driving his truck out of his own driveway. To lose a child in a car accident is bad enough; to be the unwitting instrument of that death is almost unbearable. I’ve known two people who accidentally drove over their own aged dogs and have never forgiven themselves. To do that to your child . . . well, I’m glad Heap and his family are people of strong faith (they’re Mormons) because they’re going to need that faith to support them.

And of course, today is Easter. For Christians the world over, this is the day that Christ, after having suffered one of the most traumatic deaths possible (“Eli, Eli, lema sabachthani?”), was resurrected, the central miracle that is at the heart of Christianity.

That made me think of traumatic death . . . and the sad fact that, in today’s world, we are short of miracles.

And because I have a petty mind, all of these thoughts about our fragile bodies’ vulnerability to sudden, traumatic death have led me to a very strange place: I want to tell my children, “Please, please, drive carefully. Don’t be the careless instrument of someone else’s traumatic death. In this life, death is a one way street. To be the cause of someone else’s traumatic death, especially a child’s, is something that a person carries around for the rest of his or her life. There are no do-overs. There is no going back. There are no resurrections.”

I came to this realization, the immutability of a death that one causes accidentally, embarrassingly late in life. In my arrogance, I thought I was a “good” and therefore “safe” driver, because I had an unsullied driving record. I didn’t want my insurance to go up and I didn’t want the shame and embarrassment of these violations on my “perfect” record. Then a few years ago, I got caught in two traffic stings. My “good” record was shot to Hell and I was mad. This was unfair. These stupid stings besmirched my perfect record.

For some time afterwards, I was a paranoid driver, convinced that the police were lying in wait for me. I therefore hewed obsessively to speed limits and exercised exaggerated caution at intersections. As my anger diminished, I realized something very important: I was a better driver now. I was more relaxed and — and this is the important thing — I was less of a threat to everyone else.

I’d never been a reckless driver — no big speeding, no deliberately running lights or stop signs — but over the years I’d become a very pressed driver. I was always a little over the speed limit. I was always mechanically appropriate at intersections with lights or signs, but I never made a strong, serious effort to scan for pedestrians. I just followed the lights and signs.

Suddenly, after decades of stressed, pressed driving, I was peaceful, relaxed, and aware, as I am to this day. I almost never have those frightening “automatic pilot” moments anymore, when I have no memory at all of how I arrived at my destination. I cheerfully wait as pedestrians cross the street, rather than resenting that they’re eating into my time. If the light is turning yellow, it’s a good time to stop, rather than speed up to “beat the light.” When I arrive at my destination, I’m never frazzled. I’ve come to realize that those two tickets, rather than being an insult, were a gift to me and I am grateful.

What matters most to me when I drive today is that I know that I’m doing the best that I can not to kill someone. I know that sounds immature and banal, but I mean it. God forbid something terrible happens and I do hit someone, at least I will have the consolation that my approach to driving reflects the best I am able to do to be a truly safe driver.

Bad things happen in this world. I may still have an irreversible moment of inattention, or a child may run in front of or behind me (as happened to Todd Heap), or my brakes might fail, but at least I will have the consolation of knowing that, once I was behind the wheel, I really did try my best. That may well be scant consolation, but it’s better than no consolation at all.

This is the principle I want my children to understand. Our mechanical approach to speed limits, stop signs, red lights, other traffic signs, police, and highway patrols is not the measure of a driver. Ultimately, all of those things are there simply to remind us that we are responsible for making sure that the two ton machine we are controlling doesn’t kill someone.

I can’t remember whether it was about driving or something else, but there used to be a Public Service Announcement intoning that “The life you save may be your own.” As I get older, and my own death becomes more of a reality (it’s never real when you’re young), it occurs to me that, worse than losing my own life is carelessly taking someone else’s. I don’t want, and I don’t want my children to have, a conscience that focuses obsessively on a selfish, rushed moment of carelessness that can never be undone and on that other person’s life that can never be resurrected.