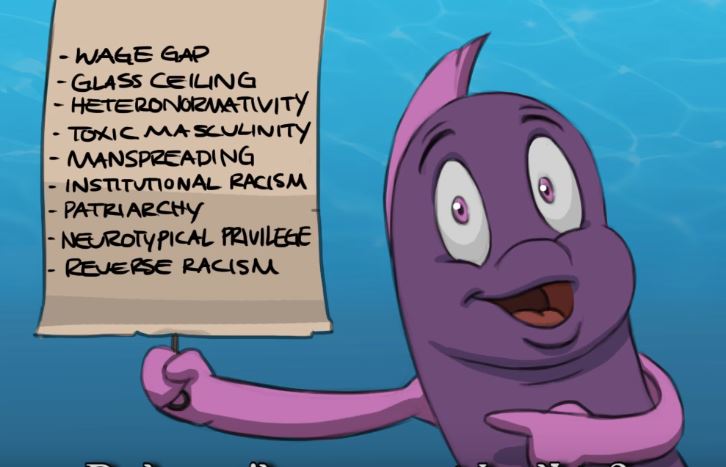 Those who are offended by brute force tactics in the battle against social justice warriors forget that we are in an ideological war with real enemies.

He’s been making popular, funny videos challenging social justice warriors for over a year now, but somehow I managed to miss entirely the Chris Ray Gun phenomenon. This video, which just popped up on my radar is great (and technically very well done) . . . and it’s not the only one of its kind. In fact, it’s part of a whole “Social Justice : The Musical” series Chris did. (Language warning.)

Here’s one more scene from his “musical”:

Now that you’ve watched and enjoyed those videos, I bet you’re going to do precisely what I did, which is to head over to his YouTube channel and watch his other stuff. You’ll see that, as is the case for so many of today’s noisy, clever, in-your-face young challengers to the stifling edicts of social justice warriors and Progressivism generally, he’s not a “pure” conservative. Instead, he’s a “sick of this Leftist” crap young man who’s willing to put himself out there in a big way to challenge to SJW paradigm that is dominant in education, entertainment, sports, and most of the other aspects of American culture that intersect with millennials.

Which brings me to another thought: When it comes to this “in your face” quality, Chris is right up there with others leading the fight against social justice warriors: Milo, Paul Joseph Watson, Ann Coulter, Steven Crowder, and our own President Donald Trump. None of them are much given to polite debate. They are willing to be vulgar, rude, insulting, belittling, and even obscene when they challenge the Left.

Indeed, these conservative firebrands often use the social justice warriors’ own tactics against them, even if that means digging into the Alinksy playbook. After all, the Alinsky playbook is not about core ideological issues. It’s a tactical, or procedural, manual, not a substantive one.

The firebrands are this way because they understand that this is not a college debating team. They have figured out that America is in a zero sum ideological war. Only one side is going to walk away the victor from this one. We not dealing with competitors; we are fighting dangerous enemies.

The Left certainly understands the nature of this fight. We can see it visibly when we witness the escalating violence social justice warriors bring to auditoriums, campuses, and public streets. They’re also engaged, hard, in a less visible economic warfare. They destroy careers, drive popular conservative figures into the wilderness, and force craven businesses (usually run by college-educated Leftists who are anxious to surrender) to their knees, begging for mercy from the Left.

In other words, as a nation, we’re not in a rule-bound debate about whether to watch Sean Hannity or Stephen Colbert. Instead, we’re having a life and death struggle that will determine whether we’re going to be a Constitutional America or Venezuela (with a nauseating dollop of Sweden thrown in). This is not a time in which daintiness and delicacy are necessarily virtuous behaviors.

And that’s what the incredibly smart, refined, decent David French does not understand. He took the occasion of Bill O’Reilly’s firing to discuss generally the aggression, crudity, and down-in-the-dirty fighting that’s become popular on the right. French’s opening point in his essay is correct. It’s only later that he falls of the rails.

That opening point is that big name conservative culture, especially at Fox, which has dominated the conservative world for decades, has been a classic example of Lord Acton’s dictum that “power corrupts and absolute power corrupts absolutely.” However, what French misses is that, if we take the accusations against Ailes and O’Reilly at face value, their failings were moral, not ideological. Their personal failings (if true) are disgraceful and certainly reflect badly on conservatives given that their ideology is predicated, in part, on traditional moral virtue and self-control.

Having said that, personal failings are relevant to hardcore ideological warfare only to the extent that they knock out combatants. They give the Left easy battle targets in the context of a much larger fight.

French’s failure to understand that there’s a difference between an ideological fight and the moral failings of certain prominent combatants leads him down the wrong path. Instead of urging higher personal standards from those on the front lines, he challenges everyone’s battle tactics:

Moreover, the pattern is repeating itself with the younger generation of conservative celebrities. The sharp rise and meteoric fall of both Tomi Lauren and Milo Yiannopoulos were driven by much the same dynamic that sustained O’Reilly for years, even in the face of previous sexual-harassment complaints — Lahren and Yiannopoulos were “fighters” who “tell it like it is.” O’Reilly was the master of the “no-spin zone” and seemed fearless in taking on his enemies.

What followed was a toxic culture of conservative celebrity, where the public elevated personalities more because of their pugnaciousness than anything else. Indeed, the fastest way to become the next conservative star is to “destroy” the Left, feeding the same kind of instinct that causes leftists to lap up content from John Oliver, Samantha Bee, and Stephen Colbert. Liberals use condescending mockery. Conservatives use righteous indignation. That’s not much of a difference.

The cost has been a loss of integrity and, crucially, a loss of emphasis on ideas and, more important, ideals. There exists in some quarters an assumption that if you’re truly going to “fight,” then you have to be ready to get your hands dirty. You can’t be squeamish about details like truth or civility or decency. When searching for ideological gladiators, we emphasize their knifework, not their character or integrity.

French is right that meteoric fame can be personally damaging, especially to young people, brutally exposing their flaws and weaknesses to the social justice warriors on the opposite side of the divide and to those engaged in internecine warfare on the same side. I completely disagree with the last paragraph, however, the one in which French challenges the assumption that “if you’re truly going to ‘fight,’ then you have to be ready to get your hands dirty.” The reality is that, if you’re truly going to fight, you do have to get your hands dirty. Otherwise, you’re probably not fighting.

For example, when America finally went to war in WWII, it did not fight the Germans or Japanese with delicacy. There was nothing dainty about the Americans at the Battle of the Bulge, nothing polite about Iwo Jima, no delicacy at Omaha Beach, and Tawara was not a congenial mud fight amongst colleagues. These were brutal, bloody, to the death battles, with absolutely no quarter given.

Still, the Americans retained their personal morality because, unlike the Japanese and Germans, they did not augment their battle tactics with ethnic cleansing, mass punitive murders against civilians, death camps, slave labor, etc. I’m sure some Leftist can dig up an example of a rogue American sadist who killed a Japanese or German baby for fun, but the reality is that our military, as a whole, confined its brutality to the battlefield — and then it was brutal indeed.

(The other thing I’m sure the Lefties will challenge is the fact that the atom bombs in Japan killed possibly killed more than 200,000 in a few minutes. Based on that isolated fact, they’ll insist that Americans are no more moral than O’Reilly or Ailes. A less ignorant person, of course, would know that part of Truman’s calculus in dropping the bombs was the estimate — an estimate Japanese records later proved was correct — that the Japanese would fight to the last man, woman, and child on mainland Japan before surrendering. This would have resulted in a million American dead and untold millions of Japanese civilian dead. In other words, faced with two mass casualty options, Truman chose the one that meant fewer deaths. That was a moral choice.)

The Nazis and Japanese, if they could have killed or enslaved all the civilians in their paths, without inflicting too much damage on themselves, would have done so. Indeed, Hitler’s obsession with Jewish genocide was damaging to his own war effort, but it was so important that he was willing to divert important military assets to carry out his plans.

War is not kind. It’s not gentle. And it’s not polite. We can certainly criticize the arrogance success engenders when celebrities’ egos take over. However, we’re very wrong to challenge those who, at the ideological level, stay true to the fight and are willing to expose themselves to physical violence, even assassination, by taking their big, noisy, conservative performance art to the enemy, whether on campus or in the White House.

We also have to accept that, in order to reach out to a sadly damaged, intellectually flaccid younger generation, you need to use tactics that they’ve been trained to understand, with raunchy insults against social justice warriors being high on the list. Again, not pretty, not rarefied, not ideologically pure, not something I like, but these tactics get the job done. Likewise, we have to accept that these eccentric, dynamic fighters are the last people in the world to march in lockstep with everyone.

Moreover, even as these front line fighters ride to fame on the really big, really important issues, such as free speech and a nation’s sovereign control over its borders, they’re going to have their own often eccentric or inconsistent takes on sexuality, religion, or a host of other issues. Other than Coulter and Trump, who are closer to my generation, the others are young and they’re invariably going to reflect, even if just a little, the world in which they grew up and the values in that world.

Bottom line: when it comes to waging war against social justice warriors, it’s a brutal fight. When surveying the battlefield, intellectual conservatives make a mistake when they confuse similar tactics with the different ideologies at issue.