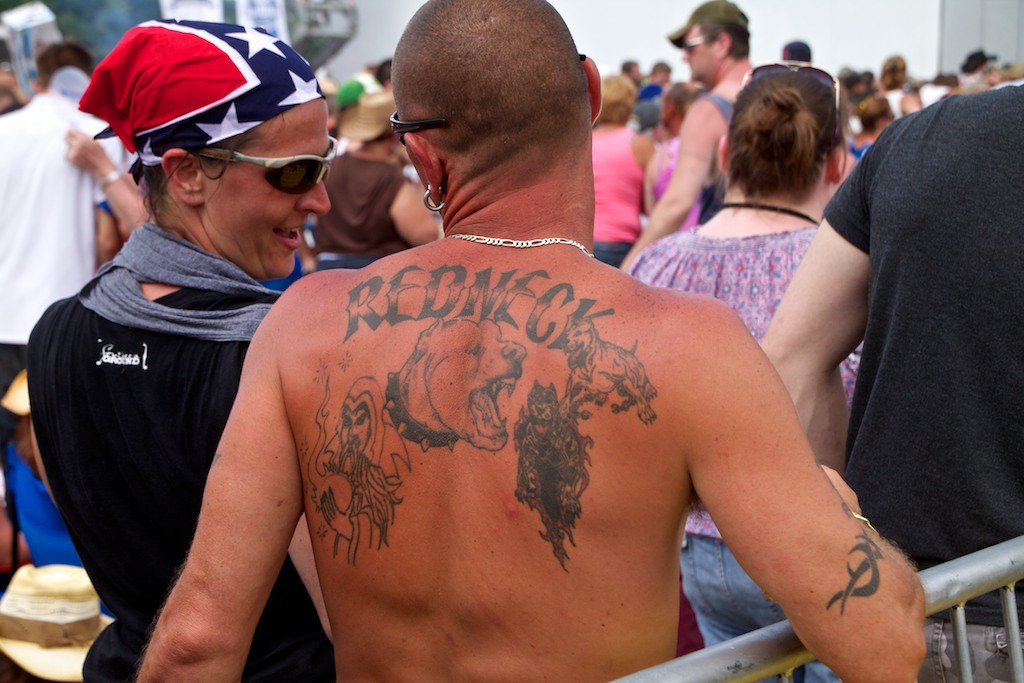 Cultural appropriation be damned.  I am finally coming out of the closet as a trans-cultural Redneck and proud of it.  Allow me to explain.

I was raised in the belly of the beast, San Francisco, by European immigrant parents who fully embraced upper class, European culture in all of its arrogant glory.  We didn’t have the money, but I was taught to have all the right attitudes.  They were drilled into me from the cradle: imported cheese, classical music, foreign movies, and a sneering disdain for the ordinary Americans who liked working with their hands, watching fights and drinking beer.

Music was an issue too. I kept my face politely bright when I was dragged to the symphony or the opera, feigning interest in Mozart’s Requiem or Verdi’s Madama Butterfly, but my heart wasn’t in it. Even as the musicians played and the singers sang, I had a separate track in my head playing Slim Whitman, Hoyt Axton, Marty Robbins, and Johnny Cash. I wasn’t a purist, by any means, of course. There was plenty of room throughout my school years for Top 40s music, but opera made me wish I could break out in hives as an excuse to leave the room.

Things got worse when I hit my hard-Left, highly-ranked college. With every passing year, it became harder to feign respect for the professors who droned on at the front of the room, reading off of stale old notes. As they preached Marxism in the classroom, either directly or indirectly, I couldn’t get past the fact that they lived in expensive homes, complete with Hispanic maids and Japanese gardeners, dined out at fine restaurants (organic before it was in), and regularly traveled to (of course) Europe. My classmates revered them; I thought they were pompous, hypocritical windbags, and the fact that I got good grades from parroting their cant back to them only increased my disdain.

It was at college that, for the first time, I grappled with the fact that, despite my upbringing and credentials, I was living a lie. I hated to be something I wasn’t, but I didn’t yet know enough to express what I was. As far as I and everyone else knew, I was just your usual slightly weird Euro-immigrant, Jewish-Liberal Bay Area Democrat.

My years at law school in Texas were the first time in my life that I felt I fit in. Sure, I had still had whole grain brown bread cravings, but saying “y’all” just felt right. It rolled off my tongue, if you know what I mean. And being friendly to people — saying “howdy” to everyone — that felt right too. It was a world away from college’s snide cliques and studied rudeness. I loved hanging out in dives and dancing all night long to the live blues and country bands.

Still, the pull of my upbringing was strong. Instead of giving in to what felt was right for me, I forced myself to return to the rarefied world in which I grew up. It was still too painful to admit to what I really was and I knew that I wasn’t strong enough to face the backlash from family and old friends.

And so for the next two decades, I hid my true self. I listened to NPR, voted Democrat, called myself a feminist, ate at restaurants that served food with names I couldn’t pronounce, periodically went to the symphony, had my collection of gay friends (who always made nasty remarks about women), and pretended I had black friends (in fact, as a young professional in San Francisco, I only knew one black person and, while I liked her, she wasn’t really a friend….). At the same time, I became a cynical, embittered, contrarian person, always pushing back at chimeras. I knew my life was wrong, but I didn’t know what was right.

What changed all this was 9/11. In the subsequent years, I realized I wasn’t a Democrat at all. I was a conservative! Oh. My. God! That was incredibly liberating. Even more liberating was writing a blog that (a) allowed me to express my thoughts without being socially ostracized and (b) put me in contact with people who didn’t sneer at Velveeta in cans, disliked opera, wanted to shoot guns, listened to country and pop music, watched MMA fighting, and thought traveling within America on vacation was cool, not pathetic.

Encouraged by these new friends, I started coming out, letting more and more close, trusted friends know that I was transitioning. Still, in public at least, I clung to the familiar. I may have been a conservative, but I was a National Review conservative — I clung to my degrees, took cover by pretending to like classical music, and disdained the Wal-Mart crowd (not that I’d ever actually been in a Wal-Mart).

As was the case with 9/11, Donald Trump’s political rise changed everything. You see, I looked at him — vulgar, eccentric, intelligent, openly patriotic — and I looked at Hillary — polished, false, robotic, utterly corrupt, and owing allegiance only to herself . . . and I chose Trump. I didn’t care that Hillary was “of my class.” More than that, I realized that I was no longer “of my class.” Somewhere along the line, my values had changed completely. On every metric, I had more in common with the Deplorables — the kind of people Hillary and her ilk sneeringly refer to as “Rednecks.”

I’m right there with Americans from the Midwest and the South: I hate modern colleges which I think are cesspools of bad ideas. I love like hamburgers and ice cream. I love America as a whole, think Middle America rocks, can’t think of a more fun way to spend an afternoon than to go to the shooting range with friends, admire people who work constructively with their hands, like men who love women and women who love men, loath modern feminists because they’re nothing more than screeching man-haters, and want to talk to people who don’t pepper their speech with references to Foucault and neo-post-modernism. I want to be around people who, if they don’t like me, will tell me that to my face and not stab me in the back.

Once you dig down through the pretense and the lies, and really know who and what you are, you have to shout it out. Sure, I may have been raised as a Lefty Euroweenie, but what I really am, deep inside, is a trans-Redneck. Or maybe more accurately, given that I prefer Haagen-Daaz chocolate ice cream to Baskin Robbins, I’m Redneck fluid. You can’t pin me down. Some days I wake up wanting to eat yogurt for breakfast, and other days it’s a biscuits and gravy with a side of shrimp grits. Some days, I have a peculiar yen for Beethoven, but other times, I’m listening to classic rock ‘n roll.

But always — always — I love my country, which I think is indeed a shining city on the hill. America is the ultimate expression of the Judeo-Christian Enlightenment’s commitment to human dignity and worth.

Always — always — I fear an all-powerful government because I have the Redneck’s healthy distrust for any aggregation of too much power.

Always — always — I cling to my guns (or my theoretical guns, since I haven’t actually bought any yet) because I think the Bill of Rights is nothing more than a wish list if citizens don’t have the means to ensure that government never infringes on those rights.

And you know what else? Unlike weak-kneed conservatives who fall down in a sobbing heap every time the “destroy Trump” media comes out with a screaming (usually false) headline demanding impeachment, I’m Redneck strong.

I may not have a drop of Scotch-Irish blood in me, but my weak Euro-Lefty blood boils when I see the calumnies heaped upon that man. Trump’s style may be hard to stomach but his substance has been solid since day one. Despite the corrupt media and the faux-elite Republicans attacking him at all turns, Trump has been working to shrink government, stem the tide of illegal immigrants and potentially murderous refugees, carry a big stick abroad as necessary, stand up to an utterly corrupt media, and generally do his best to Make America Great Again.

So, like it or not, if you’re hanging with me, you have to accept that I’m Redneck fluid and proud. Now, where did I put my Daisy Dukes. . . .