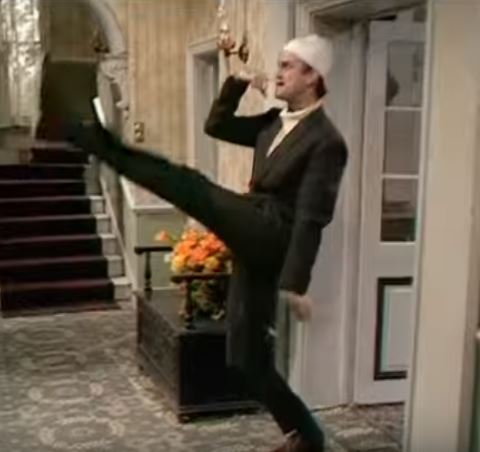 In 1975’s Fawlty Towers, it was funny to say “don’t mention the war” to Germans. In England today, it’s no joke that you can’t pair Islam with violence. 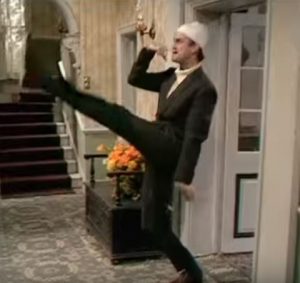 After John Cleese left Monty Python, he and his then-wife, Connie Booth, went on to create and start in Fawlty Towers. In it, Cleese plays Basil Fawlty, the perpetually angry, extremely inept, always inappropriate and outspoken proprietor of a Cornish inn. The cast regulars surrounding him are his wife, Sybil, who rarely gets off the phone, stopping only to scold Fawlty for his stupidity; a Spanish waiter and all-around dogsbody who’s never mastered much English beyond “Que?”; a somewhat senile old major and a couple of wittering old ladies; and Polly (Connie Booth), the maid and waitress, who is the only decent, sane person in the establishment.

Fawlty Towers is not to everyone’s taste because it is anarchic, angry humor. However, for those who watched the show, one of the best episodes focuses on a group of Germans coming to stay at the inn. When this episode was made, in the mid-1970s, WWII had ended a mere 30 years before and lived on in all adult memories. Therefore, to ensure a pleasant stay for the German guests, the inn’s mantra was “Don’t mention the war.”

This mantra proved to be too much for Basil, especially after he sustained a blow to the head. I’ve included two links here. The first is to the entire brilliant episode. The second, for those who will never watch it or have already watched it, is to the key scene with the Germans. After you’ve watched the episode or refreshed your recollection, I’ll get to my point about modern England:

In Fawlty Towers, with “Don’t mention the war” serving as the guiding principle, the only one who breaks ranks and mentions the war is stark raving mad and quite mean. That’s a very funny joke (especially the goose-stepping part).

In modern England, though, things are no joke. Even if the gun is at your head, the rule is clear: “Don’t mention Islam in connection with slaughter.” Daniel Greenfield caught this shibboleth in action. The scene is a bar in London, with the police telling customers to take cover (language warning):

Greenfield describes what you might have missed if you didn’t pay close attention to the video’s last few seconds:

And this is in a terrorist attack in which the killers made a point of shouting “This is for Islam” and “This is for Allah”.

Admittedly, it’s possible that the people in this particular bar hadn’t heard the killers’ shout-outs to Allah and Islam. Perhaps the angry man shouting out his imprecation was just making a guess based upon reasonable probabilities. Regardless, what’s fascinating is the cultured voice assuring himself, the angry man, and the legions of people who will be watching the video that it’s not Muslims. It’s never Muslims.