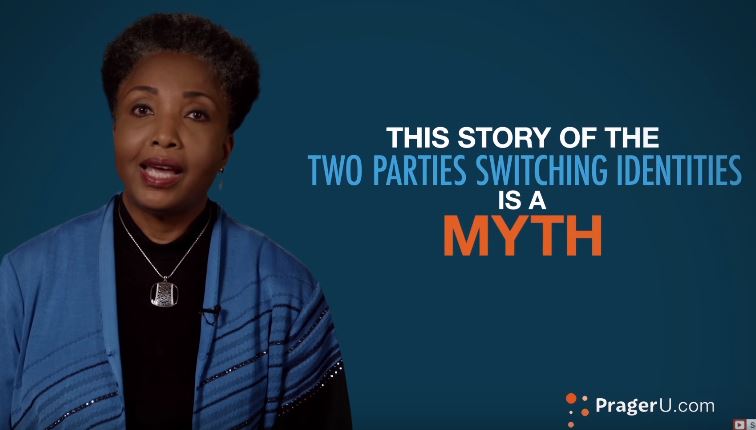 Letting the losers in a war write the history causes fake histories, such as the one claiming that a 1960s switch turned Republicans into the racist party.

In the context of world affairs, victory doesn’t always belong to the side that won the actual battles; it really rests with the side that writes the history. Viewed in that light, the last shot fired in the Civil War didn’t take place on the battlefield. Instead, it took place in 1936, when Margaret Mitchell’s Gone With The Wind hit the shelves.

GWTW took the South’s mythology and nationalized it. The epic 1939 movie was a force multiplier. Suddenly, the South, rather than being the losing side in a war fought primarily to end slavery, a foul institution in its own right and one made especially awful in America because it betrayed the promises in America’s founding documents, was a romantic entity, built upon unending charm and graciousness. Moreover, thanks to Margaret Mitchell, readers were well-schooled in two facts that perpetuated black subordination: (a) good slaves loved their masters and (b) bad slaves were evil and/or stupid.

The hold that Margaret Mitchell’s dynamic, romantic, fascinating narrative had on the popular consciousness probably started weakening during WWII, when Americans outside of the South got to see blacks in action, in factories and on battlefields. Truman’s executive order integrating the military, causing black and white troops to serve side by side further educated white Americans about their black fellow citizens.

The final rewrite was the Civil Rights movement. Thanks to television, Northern whites got to see a different side of blacks. They were no longer Margaret Mitchell’s plaster saints, grateful for the chance to serve their white masters or Topsy-esque fools. Instead, they were people of immense dignity, led by a man of God whose words burned themselves into American souls.

People understand the outlines of the Civil Rights, but too many do not know that, in the 1950s, it was the Republican party that drove that train. And it was the Democrat party that fought tooth-and-nail against any effort to remove the legal and social impediments imposed upon blacks, mostly in the South, but also throughout America.

This political division was unsurprising to people at the time. The history of the Democrats from their founding to the Civil Rights movement was as a slavery party, dedicated entirely to ensuring that blacks remained subordinate in America. It was open and proud about its status as the racist party. Meanwhile, the Republicans came into being as an abolitionist party, with Abraham Lincoln becoming their first standard-bearer.

The answer to that question lies in the concept with which I opened this essay: Victory doesn’t always belong to the side that won the actual battles; it really rests with the side the writes history.

Today, with their successful takeover of education from kindergarten through college and their dominance in the worlds of both news and entertainment, Democrats have been rewriting the history of the Civil Rights movement and its aftermath for more than 50 years. In this retelling, the moment the Civil Rights movement came along, even as northern Republicans fought for equal rights for blacks, the entire South switched its party affiliation from Democrat to Republican, turning the Republicans into the racist party.

I grew up hearing that story in school, and I therefore grew up believing that story. The problem is that it really is just a story, one without any relationship to facts. In the latest Prager U video, Carol Swain explains just how big that Big Lie really is:

Democrats achieved this conceptual victory by forcing a false paradigm on blacks and combining that paradigm with welfare incentives. The paradigm is that, because slaves had to work for white people, all work that involves interactions with white people is slavery. If you believe in that paradigm, the logical response is to quit work and take welfare, in effect turning the whites into slaves who work for you.

I find the Black Lives Matter movement utterly reprehensible, because its worst effects will always fall on the helpless people within black communities. Once you drive out the police, which the movement is doing in communities across America, you create a vacuum that sucks in the predators. And while only a small percentage of police are dangerous, all predators are dangerous.

However, to the extent that the Black Lives Matter movement is hostile to everything in America society, it’s finally creating a cadre of blacks who are no longer willing to be beholden to Democrats. In the long run, that’s a good thing. In the short run, of course, BLM is anarchy.

One other thing: Unlike most conservatives, I’m actually okay with the push across the South to get rid of Confederate monuments. Their existence reflects the fact that, despite losing the war, the end of Reconstruction left the American south free to control history (which, as I said, happened on steroids with GWTW).

To understand what I mean, imagine that the Americans unconditionally pulled out of Germany in 1950. The moment they left, the Germans, while avoiding genocide, reinstated all the anti-Jewish laws of the 1930s. Moreover, they erected monuments all over the place celebrating Hitler, Rommel, the SS, and the Gestapo. As a Jew, even if the anti-Jewish laws were gone, I would be irremediably hostile to those monuments. Likewise, if I were a black in the South, even with the Jim Crow laws gone, I would hate seeing statues of men such as Nathan Bedford Forrest, one of the most brutal Confederate generals and a KKK founder.

A couple of other minor points that I’m throwing in, since they’re vaguely apropos: First, my own short journey into the South a couple of summers ago left me believing that, at least in Virginia, there’s more racial integration than I’ve ever seen in America’s West or North. Second, GWTW is a spectacular novel. Taken strictly on those terms, it’s one of the best American books ever written. But there’s no escaping that it is a piece of Southern propaganda, representing the last battle in the Civil War, and that it needs to be understood as such.