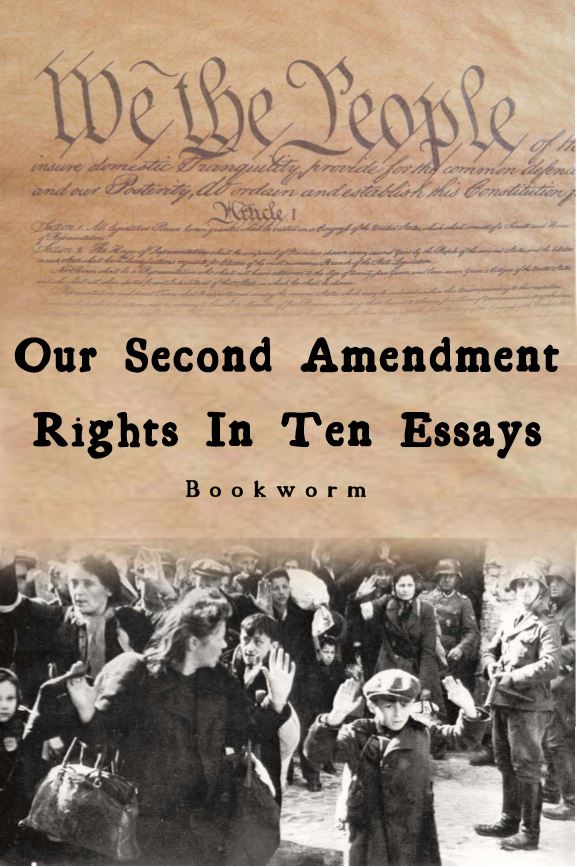 With the Las Vegas massacre having reopened the endless Progressive attack against the Second Amendment, I remembered that there’s a book on the subject — my book to be precise: Our Second Amendment Rights In Ten Essays

. In an attempt to inveigle you into buying it, here’s an excerpt from Essay 5: “Gun Grabbers Ignore That Guns Not Only Take Lives, They Save Lives” (end notes omitted).

5. Gun Grabbers Ignore That Guns Not Only Take Lives, They Save Lives

When it comes to guns, the gun grabbers suffer from a very bizarre limitation: Their mental horizons allow them to see only those who died because of guns, not to recognize those who did not die thanks to guns. This myopia creates the giant intellectual chasm that separates those who oppose the Second Amendment from those who support it. The former see only the people who died in the past while the latter also see the ones who will live on into the future.

Perhaps it would help these gun-grabbing Leftists to read Frédéric Bastiat’s magnificent Parable of the Broken Window, which the French economist wrote in 1850. If the parable doesn’t seem relevant at first, please bear with me, and I will explain why it matters:

Have you ever witnessed the anger of the good shopkeeper, James Goodfellow, when his careless son has happened to break a pane of glass? If you have been present at such a scene, you will most assuredly bear witness to the fact that every one of the spectators, were there even thirty of them, by common consent apparently, offered the unfortunate owner this invariable consolation – “It is an ill wind that blows nobody good. Everybody must live, and what would become of the glaziers if panes of glass were never broken?”

Now, this form of condolence contains an entire theory, which it will be well to show up in this simple case, seeing that it is precisely the same as that which, unhappily, regulates the greater part of our economical institutions.

Suppose it cost six francs to repair the damage, and you say that the accident brings six francs to the glazier’s trade — that it encourages that trade to the amount of six francs — I grant it; I have not a word to say against it; you reason justly. The glazier comes, performs his task, receives his six francs, rubs his hands, and, in his heart, blesses the careless child. All this is that which is seen.

But if, on the other hand, you come to the conclusion, as is too often the case, that it is a good thing to break windows, that it causes money to circulate, and that the encouragement of industry in general will be the result of it, you will oblige me to call out, “Stop there! Your theory is confined to that which is seen; it takes no account of that which is not seen.”

It is not seen that as our shopkeeper has spent six francs upon one thing, he cannot spend them upon another. It is not seen that if he had not had a window to replace, he would, perhaps, have replaced his old shoes, or added another book to his library. In short, he would have employed his six francs in some way, which this accident has prevented. (Emphasis mine.)

Just as is the case with the economic illiterate who cannot imagine that money might be spent on something more useful than fixing a broken window, a gun control advocate’s world view “is confined to that which is seen; it takes no account of that which is not seen.” He counts those who have died, but cannot even begin to imagine those whose lives were saved or never threatened.

Point such an advocate to a story about an off-duty deputy who was able to stop a mall shooter, and he will say only that, “The gun still allowed the shooter to kill one or two people, and there’s no way to tell if the shooter intended to kill more people, so the armed deputy is not relevant.”

To the gun-control proponent, a story without dead bodies is no story at all and it certainly has no statistical validity in the debate over the Second Amendment. To one who believes in the Second Amendment, however, stories about people using concealed-carry guns to stop mass shooters matter because we, unlike the gun grabber, are able to take account of those people who survived what would otherwise have been a mass shooting.

In the same way, we see – and count — the old lady who protected herself from a rapist, the child who kept out a violent home intruder, or the woman who avoided being beaten to death by a boyfriend high on drugs. To us, these are people who walk among us thanks to guns. To gun grabbers, because they’re not lying in a morgue, they do not exist.

The bottom line is that when a person who supports gun rights looks at crime statistics showing that legally-armed communities have a lower murder rate than gun-controlled communities, that person thinks of all those law-abiding citizens in the first community who sleep safely in their beds at night. To him, these living people are as statistically relevant and important as the sleeping dead in the cemetery of that pathetic gun-controlled town down the road.

The total list of subjects in the book (a short and, I hope, easy read) is as follows:

1. A Typical Discussion With Gun Grabbers; Or, What Second Amendment Supporters Are Up Against
2. Guns Are Most Dangerous When The Government Is The Only One That Has Them
3. America’s Founding Fathers Ratified The Second Amendment Because They Knew That Government Is Dangerous
4. A Self-Defended Society Is A Safe Society
5. Gun Grabbers Ignore That Guns Not Only Take Lives, They Save Lives
6. Beware Of Arguments Comparing American Gun Crime To That In Other Nations; These Arguments Are Always Dishonest
7. The Only Way Gun-Control Activists Can Support Their Position Is To Lie
8. Disarming Americans Is A Racist Thing To Do; Therefore, Second Amendment Supporters Are Anti-Racists
9. Jews, Of All People, Should Always Support The Second Amendment
10. If We Really Want To Protect Our Children, We Shouldn’t Ban Guns, We Should Ban School Buses

Those readers kind enough to have left reviews seem to like the book. For less than the cost of a good cup of coffee from your local coffee shop, maybe you should give it a try.