Guest blogger Lulu has noticed that the women speaking up about the Weinstein scandal fall into a few distinct categories, none of which seem very brave. 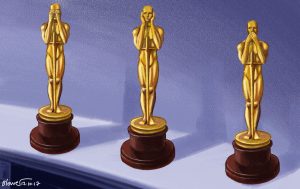 Like everyone else, I have been watching the Harvey Weinstein story unfold with some fascination. Of course, the “why now?” aspect remains unanswered, and the other shoes have yet to drop on other perps and pervs. It has been remarkable to watch the Hollywood omerta code and how it was honored for decades. For me, an observer of human behavior, it has been fascinating to observe the reactions of the Hollywood community: the liars, the hypocrites, the actual victims, the game players. They’re all there.

First thing I noticed was that confessions seemed to follow a pattern. Harvey made lewd requests. The actress says she refused. Gwyneth Paltrow and Angelina Jolie fit into this group. He tried. They declined. Harvey was pretty bold. These are daughters of Hollywood celebrities. It doesn’t deter him. These aren’t hungry small town girls he can easily manipulate. No, here the message is definitely about power. I can even humiliate people with famous parents and everyone is too scared of me to stop me. It’s a power play to be sure. I am intrigued by the fact that everyone famous says she said no. No one famous could possibly admit that she said yes if she did.

The liars: Meryl “I never knew, this is the first I’ve ever heard of it, Harvey Weinstein is God” Streep. Jane “I only heard about it last year. I’m totally shocked” Fonda. Brave feminists.

The hypocrites: They’re all hypocrites, but let’s especially look at the feminist pussy hat wearing advocates, like Ashley Judd, who protected Weinstein with her silence for years, protecting her career, not reporting a crime, allowing other women to be hurt by her silence. And there’s a special hypocrisy category for the late night comics, like Colbert and Kimmel, SNL, and on and on, who couldn’t be roused to even mention Weinstein in case it came back to personally bite them. As Iowahawk says, the Left media is about “covering the story. With a pillow. Until it stops moving.” Much has been written about their hypocrisy already so I will only add that there is some schadenfreude seeing these blowhards exposed as the moral midgets they are. Courtney Love was one of the few brave ones.  But they all knew and they willfully closed their eyes to it.

The game players: Let’s face it. It’s what you’ve gotta do to get a part. I’m sure lots of women knew exactly what to expect with old Harve and were willing to do so as the price to fame. Perhaps I am imagining, but every picture I see of him with Jennifer Lawrence makes me uncomfortable. He holds her too tightly, with too much familiarity. She laughs too hard at his jokes. She says she’s distressed by what he did to women and that he never tried anything like that with her. With a new confession every day, how likely does that sound?

What else could she say? It is not just fear of losing work, that keeps people silent. It’s not just hypocrisy. It’s fear that the public will assume that’s how they got the part and got rich and famous, and not just her remarkable, unique talent. And ugh. That’s real humiliation.

The liars and the hypocrites deserve little sympathy. The game players? Hard to tell. But there are real victims out there, the ones who had no powerful families or friends to protect them, and the ones who didn’t even gain fame and money in exchange for the fear and humiliation. As always, in a company town such as Hollywood, it’s the bit players that are the actual victims.