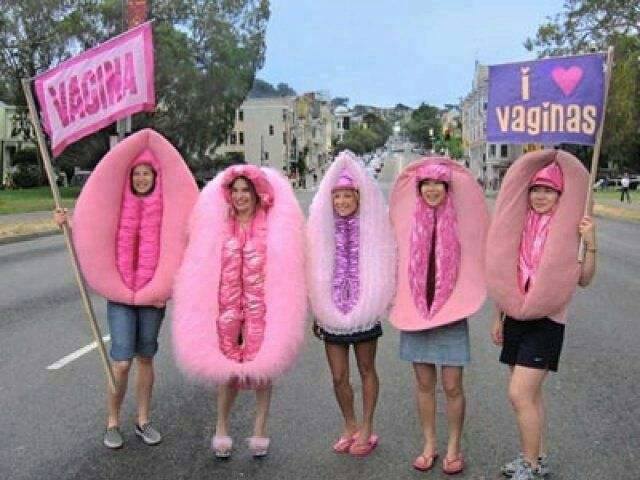 Trump hatred does turn formerly sane people insane; instead, Trump hatred is the catalyst that reveals that people we once thought sane never were.

Last night, I watched a sad show about mental illness in children. I’d love to tell you what it was, but I walked in on it while Mr. Bookworm was already watching and never did find out either the show’s name or even the network on which it played.

What I can tell you is this: The show followed three boys, all with scary behaviors that exceeded their parents’ ability to cope with them. In each case, the parents were terrified that their sons would either commit suicide or harm other people. The show was a reminder that mental illness is a disease every bit as destructive as cancer — and, unlike cancer, the person with the disease is not the only one battling the illness.

Trump hatred is a form of insanity. Trump haters are completely unhinged from reality. They’re deeply enmeshed in paranoid delusions that play out against the background of their own unhealthy obsessions.

My point is that the anti-Trump delusions are completely unrelated to the reality that is President Trump. Progressives have left reality behind and are living in a nightmare of their own making, one in which they see their obsessions — race, sex, religion, violence, etc. — played out against a make-believe Trumpian backdrop.

It’s this genuine insanity that explains the entrants on Don Surber’s “Trump Effect” list. That list tracks all the famous people who have attacked Trump and documents their epic falls from grace. What makes the list so good is that, as Don points out, Trump never has nothing to do with a given person’s fall. Instead, for all of these Trump haters, it’s their own insanity that drags them down.

Eric Schneiderman is only most recent person on the list, but he is the embodiment of the way in which Trump hatred reveals a person’s long-standing insanity. He’s a fanatic Trump hater who has used chameleon tactics to hide amongst the Left. Foremost among these tactics is his claim that he is, above all, an ardent protector of American womenhood, as that womenhood is defined by the modern Left: she wants to have abortions and march in pink hats. It turns out, of course, that Schneiderman is an alcoholic, sadistic, misogynistic racist. Trump did not create those qualities in Schneiderman. Instead, the fact that Schneiderman possesses those qualities is what led him to hate Trump.

In his post adding Schneiderman to the Trump Effect list, Don points to a wonderful series of tweets by Thomas Wictor that explain how the very act of Trump hatred justifies an insanity diagnosis. Because I find it hard to read Twitter threads on blog posts, I’ll give you Wictor’s first tweet, which includes a link to his thread, and then just have the text of the thread below:

On May 3, 2018, a VERY conservative, VERY religious vice president graciously swore in our gay ambassador to Germany, as the ambassador’s partner held the Bible.

(3) Did the vice president BOYCOTT the swearing in?

I read tons of tweets from religious conservatives who fumed at the SLOWNESS with which the ambassador was sworn in. [By “slowness,” I assume Wictor means the delays attendant on Grenell’s getting appointed.]

It turns out that the RELIGIOUS CONSERVATIVES are far healthier in their approach to our changing culture.

(5) Remember that the vice president was mercilessly mocked for not attending parties without his wife?

Well, how does that compare to smashing women in the face until they submit to your sexual desires?

(6) And I’ll tell you something else:

Trump knew about Schneiderman in 2013, right?

(7) That means that EVERYONE in New York knew about Schneiderman.

They haven’t told you the worst of it.

I’m amazed that it’s not in the news.

(8) Years ago I saw a Mad Magazine cartoon.

Four women were having coffee.

The hostess offered one a slice of chocolate cake.

(9) “No,” said the woman. “It’s too fattening. I’ll take my coffee black and use artificial sweetener, so that way I can have a noncaloric coffee break.”

“Wow! You so disciplined!” said the hostess. “I really admire that.”

Her eyes were popping as she grabbing the spatula and cut off a hunk of cake five inches wide.

(11) Leftism is all about LIP SERVICE.

By SAYING you won’t have cake, that gives you the right to have FIVE TIMES AS MUCH CAKE.

Because you’re such a GOOD PERSON.

(12) I have no doubt whatsoever that @VP NEVER thinks of himself as a “good person.”

And he certainly NEVER gives himself a REWARD for paying lip service to ideals.

(13) I’m not religious, but I understand the religious mindset.

We battle to overcome those flaws.

(14) Leftism, on the other hand, is about SAYING the right things.

As long as you SAY the right things, you can beat up women to your heart’s content.

(15) I never understood the HATRED dircted at @realDonaldTrump.

Before the campaign, I knew nothing about him.

I felt nothing one way or the other.

(16) The second GOP debate absolutely blew me away, but I realized that he’d used the FIRST debate to take the measure of all his opponents.

So I frantically read everything I could by and about Trump.

And then I was in.

(17) I knew that Trump would be our greatest president, and I realized that he’s a touchstone and a diagnostic tool.

If you HATE him, you’re insane.

I understand The Donald not being your cup of tea, sure.

I think he’s exactly what the doctor–God–ordered.

And these pathological rinky dinks are going to implode one after another.

(19) I was very moved watching Ambassador Grenell speaking after being sworn in.

He promised to not let us down.

If you hate him, you’re insane.

I haven’t been worried since Trump defeated the recount plan that Soros and Michael Moore and Jill Stein hatched.

THAT was staggering genius.

I knew then that all would be well… (Emphasis mine)

Insanity means that your brain is so sick, whether organically, because of substance abuse, or because you’ve been brainwashed, that it can no longer tell what is true and what is illusory. While the greatest number of mentally ill people commit damage only against themselves, whether it’s physical self-harm, living on the streets, being unable to hold jobs, not having friendships, etc., their illness can spread to affect those around them. For example, when it comes to the mentally ill homeless, we have cities that have been shitholes fully equally to anything the Third World can offer — but while the Third World has the excuse of abysmal poverty and deeply entrenched, and failed, cultural norms, Leftist cities are embracing the insanity and are actually proud of what it says about them.

Insanity also spreads to corporations. Corporate America is helmed and largely staffed by people who have graduated from America’s loony bins, aka colleges and universities. That’s how we end up learning this about a Google convention:

At Google #io18, stickers to add to your badge to let people know which pronouns you prefer. pic.twitter.com/v1munoQOXT

Sane people instinctively understand that you cannot magically transform your sex, although you certainly can have a tragic mental illness that leaves you uncomfortable in your own skin. In the same way, sane people understand that pronouns are not a magical incantation that results in everyone accepting the insane person’s delusions as the truth. The fact that corporations are using their power over people’s lives — their working conditions, incomes, and ability to hold a job — to force sane people to accept insanity is another case of insanity radiating outwards, causing tremendous harm to those who are sane, but find themselves forced into contact with another’s crazy.

And of course, whole nations can go crazy. When we look back on Nazi Germany and Bushido Japan, we understand that those nations collectively went insane. The seeds of this insanity can differ (e.g., the Bushido cult in Japan or Germany’s toxic combination of traditional antisemitism, socialism, and WWI destruction), but the outcome was the same: A nation swept by delusions unrelated to reality, with the delusions reflecting the culture’s projected paranoia and obsessions, resulting in widespread violence and horrific death tolls.

If you want a modern visual of the crazy, here are some sample tweets from Bradley Manning, a traitor whose insanity leads him to believe that he’s a woman, and who is running for a seat in the United States Senate:

at the top of our platform is the immediate and complete abolition of @icegov #abolishICE https://t.co/uL3v6IM3Ub

You can see more of the crazy here, which shows how it physically destroys people, especially young women. Those same crazy tentacles reach out to young men too, celebrating what is broken and trying to break what is whole: 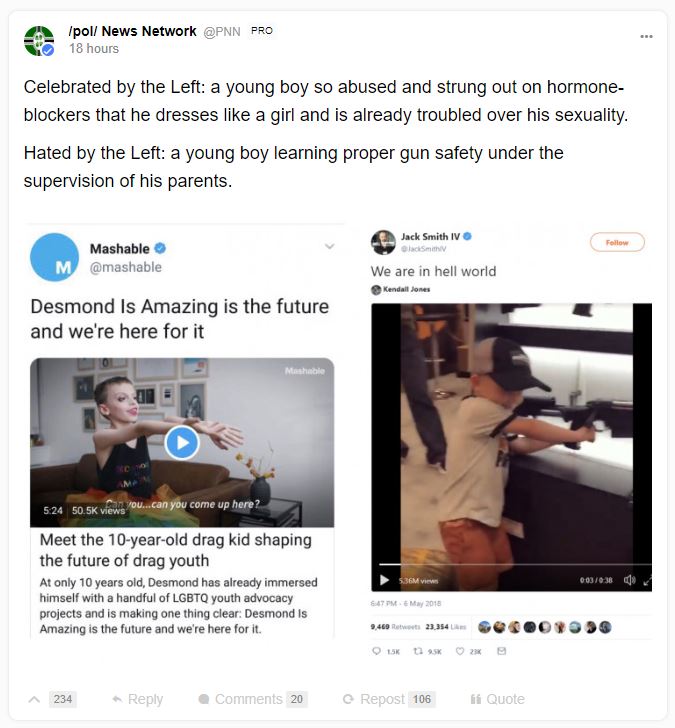 Currently, the crazy is confined to the hardcore Democrats. Treating the insanity will be difficult. As the documentary I watched suggested, there is no magic phrase or act or medicine that pops someone out of the delusional world in which they live and instantly turns off their more aberrant and violent behaviors. Instead, returning people to sanity, if it can be done at all, is a slow process that involves therapy, medicine, and tincture of time.

For us, the sane Americans facing off against the Leftist insanity that has coalesced around Trump hatred, there is no medicine we can hand out. The therapy is to force these Leftist to follow their own rules, and for us to stand unflinchingly, and without apology, by our own actions, beliefs and values. There’s also tincture of time: as more of the less insane people realize that there’s a happy world out there, one in which people are not obsessed by -isms and phobias (racism, sexism, Islamophobia., etc.), they will be able to mature out of their craziness and take their place among those of us who enjoy America’s bountiful individual liberty and free market economy, to the benefit of all.