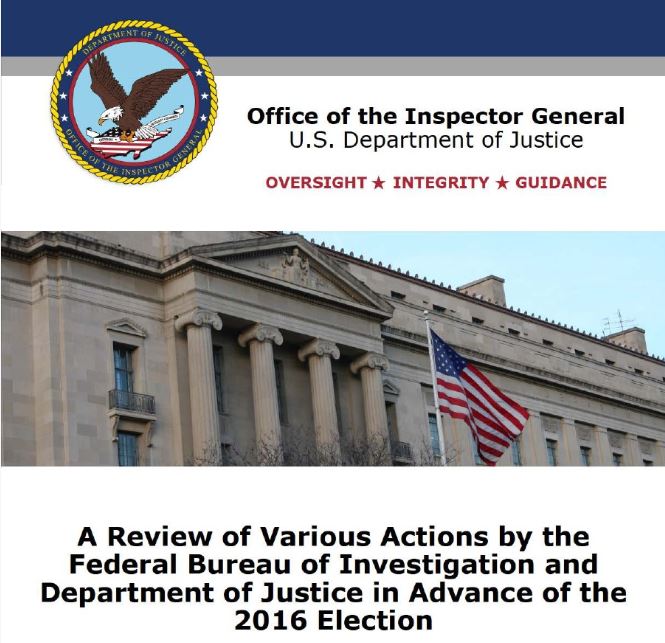 The IG Report ignores that the Clinton investigation was completely and irreparably compromised by agents whose biases went to the heart of the case. The IG Report is a strange beast. To begin with, it’s a rather ironic companion piece to Comey’s July 5, 2016 press conference. Back then, Comey laid out facts that ought to have sent Hillary to prison for 100 years. Just as we were all expecting him to say, “So we’re going to arrest her,” though, he abruptly announced a nonexistent legal standard, assured us that Hillary didn’t mean to do something naughty under this new standard, and gave her a get out of jail free.

What jumps out is that the IG Report does the same thing. Horowitz blandly dismisses any FBI actual wrongdoing affecting the outcome of the Hillary investigation, but lays out facts that ought to send all of the FBI’s upper management for 100 years. The only exception to that bland dismissal on those ugly facts is . . . Comey. There’s irony for you.

Thus, the IG Report fails for the same reason that the Comey report did, which is that there’s a gaping chasm between facts and conclusion. Only the media and Democrat party operatives (but I repeat myself) could look at that chasm and pronounce that it’s nothing more than a tiny hole in a smooth, coherent narrative.

The indispensable Andy McCarthy appropriately slams the IG Report for its weaseling approach to facts and conclusions:

The trick here is the premise the IG establishes from the start: It’s not my job to draw firm conclusions about why things happened the way they did. In fact, it’s not even my job to determine whether investigative decisions were right or wrong. The cop-out is that we are dealing here with “discretionary” calls; therefore, the IG rationalizes, the investigators must be given very broad latitude. Consequently, the IG says his job is not to determine whether any particular decision was correct; just whether, on some otherworldly scale of reasonableness, the decision was defensible. And he makes that determination by looking at every decision in isolation.

But is that the way we evaluate decisions in the real world?

For all his assiduous attention to detail, IG Horowitz has weaved a no-common-sense report.

How does the IG pull this off? Two ways.

The first, as mentioned above, is methodology. By disavowing any intention to pass judgment on the rightness of any particular investigative decision, by announcing upfront that he is confining himself to an assessment of whether the decisions were rational, Horowitz reads motivation out of the equation. If there were two investigative options — e.g., (1) give immunity to Paul Combetta (the service technician for Clinton’s server who lied to the FBI and destroyed evidence) or (2) prosecute him for false statements — the IG says his analysis is limited to whether the option chosen was objectively defensible.

The IG’s second tack involves the facts he chooses to present. The report is truly half-baked because it omits half the story — all Clinton emails, no Trump-Russia. Of course, that’s neither how the cases evolved, nor how the investigators looked at them.

When Ted Cruz dropped out of the GOP presidential race, making Trump the de facto nominee, the very first thing Strzok said upon hearing the news from Page was, “Now the pressure really starts to finish MYE” — i.e., “Mid Year Exam,” the code name for the Clinton caper. The best way to “stop” Trump was to free Hillary to beat him. So, the bureau simultaneously labored to close the case on her and invent a case on him.

Everything McCarthy says is absolutely true. I’m going to add one point, which is that we don’t even need to analyze the facts as McCarthy does.

What I find unacceptable, indeed delusional, is the IG’s definition of “bias.” Let me explain it from the lawyer’s viewpoint (while pointing out that Horowitz and his team are lawyers).

Here’s the way it goes if you’re a lawyer, sizing up a jury: Lawyers understand that everyone has biases, or filters, through which he or she views the world. In many, indeed most, situations, our biases are are acceptable and are relevant only insofar as they affect our own decisions in life. For example, the fact that you are fond of cops because your dad was a cop is a fairly irrelevant matter in most areas of life. You might like donuts more than the next person, or follow a police-friendly feed on Twitter, but your preference (or bias or filter) does not affect justice or safety or honor. However, if you’re being sized up for a jury in a DUI case, and the defense is police malfeasance, your strong fondness for cops is an unacceptable bias. The defense attorney will act strenuously to ensure that you’re not on the jury.

Likewise, if you’re an FBI agent who loathes Trumps and loves Hillary, but your beat is organized crime in North Dakota, your political preferences in the run-up and follow-up to the 2016 election are irrelevant. However, if you have those same biases and you’re working on either the Hillary or the Trump investigation, those biases should presumptively disqualify you from working on the case(s), in the same way that the cop lover shouldn’t be a jury on a case that has as its central issue police behavior.

Once Horowitz identified the blazing, oozing contempt that animated top FBI officials on the Hillary and Trump cases, that should have been game over. Just as Comey overreached by imputing a lack of intent to Hillary, so did Horowitz overreach by stating that, manifest biases notwithstanding, it was still possible that these biases did not affect the FBI agents’ behavior. It was not Horowitz’s responsibility to speculate about the effect of the bias. It was enough that the bias was there and that the FBI not only didn’t bar these agents from working the cases, it encouraged them.

(And yes, I’m perfectly aware that the facts Horowitz adduced showed that the Fibbies repeatedly acted on their bias, all to Hillary’s benefit. I’m just challenging Horowitz’s own standards here, rather than making a whole argument about his erroneous, ridiculous conclusions.)

I applaud Horowitz for honestly reporting the facts; I consider him a coward and a failure for refusing to reach the obvious conclusion to be derived from those facts: the Clinton investigation was completely, irreparably, and possibly criminally compromised by agents whose biases went to the heart of the case.