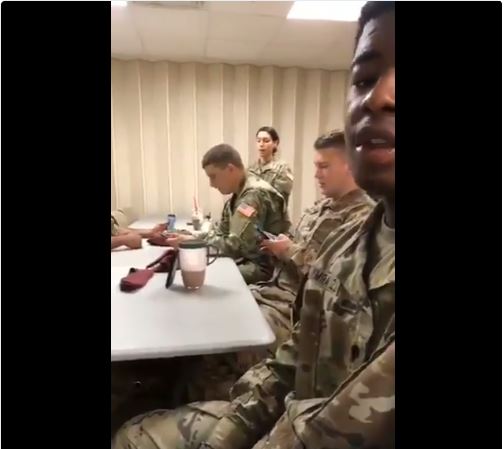 The 82nd Airborne’s beautiful recording of Irving Berlin’s God Bless America, reminds us that reverence for liberty is at the heart of American patriotism.

Irving Berlin’s family came to American in 1893, when he was five, leaving behind forever the ethnic, genocidal pogroms that destroyed his family home in Russia. His only memory of his time in Russia was of hiding in the woods as Russians torched his family home for the “crime of being Jewish.”

Berlin’s family settled in New York’s Lower East Side, which was then the most densely populated spot in the world. At 13, his formal education ended when Berlin became a singing waiter to help support his family. The rest, of course, is American musical history. I’ll just note here that he was one of the few members of the great American Songbook who wrote both music and lyrics.

I happen to love Irving Berlin’s music. The melodies are accessible, but not simplistic, and the lyrics are incredibly sophisticated, all the more so when you consider the “English-as-a-second-language” and “almost-no-formal-schooling” issues in Irving Berlin’s life. Look at the vocabulary choices and the internal rhyme schemes in this verse from Lazy:

By way of contrast, here are some lyrics from Child Gambino’s This is America:

Speaking of this being America, Irving Berlin had something to say on the matter too. In 1918, he wrote God Bless America for a soldiers’ show in WWI, but decided it hit too close to him (by which I mean his own heartfelt love for his adopted country, which he wasn’t yet comfortable with ripping open for an audience). By WWII, though, with Western liberty facing a cataclysmic existential threat, Irving Berlin dusted that old song off, making it Kate Smith’s biggest hit.

Contrast Berlin’s lyrics with Gambino’s — and I mean contrast at every level: vocabulary, rhyme structure, sophistication and, of course, patriotism:

God bless America, land that I love,
Stand beside her and guide her
Through the night with a light from above.
From the mountains, to the prairies,
To the oceans white with foam,
God bless America,
My home sweet home.

While the storm clouds gather far across the sea,
Let us swear allegiance to a land that’s free.
Let us all be grateful for a land so fair,
As we raise our voices in a solemn prayer:

God bless America, land that I love,
Stand beside her and guide her
Through the night with a light from above.
From the mountains, to the prairies,
To the oceans white with foam,

Although the lyrics aren’t complicated, there’s nothing simplistic about Berlin’s reverence for America. He loved America; although not a religious man (he married a Christian woman) he recognized that America was a nation steeped in the Judeo-Christian tradition; and he placed his entire faith in a country dedicated to liberty.

Make no mistake though — Berlin understood America’s imperfections. Anyway who was raised in the Lower East Side and who was a Jew in a pre-politically correct, pre-Holocaust age, understand poverty, racial hatred, and economic inequality. But he also understand that the world had never offered any better chance to people from all places, from all walks of life, and from all belief systems, to “make it.”

Irving Berlin was proud of that song and sang it with every bit of his heart and soul (and gave all the proceeds to the Boy Scouts of America, an organization that no longer exists):

And yes, there’s a reason for the above waffle. One hundred years after Berlin first penned his love letter to America, the men and women of the 82nd Airborne have recorded a breathtaking version of that same song:

I’m no video editor. Hopefully, the power and humanity comes through. pic.twitter.com/GszG4xmE0U

If anyone understands and reveres liberty and the never-ending price we pay to preserve it, it’s got to be the 82nd Airborne.

Also, if you go here, the same 82nd Airborne singing crew did a lovely version of Amazing Grace.

Long-term readers may recall that I’ve commented before about Irving Berlin’s longevity as a culture maker. He never gets old.