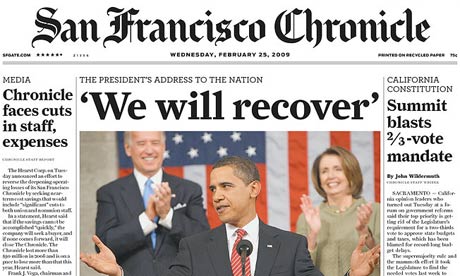 For years, the San Francisco Chronicle has been a reliable Leftist propaganda outlet — but one article and its surprising comments counter that narrative. 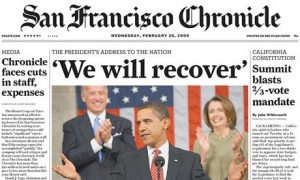 San Francisco is a Leftist city and, in the San Francisco Chronicle, it has a hard Left newspaper. I stopped subscribing to the paper 20 years ago because I found it impossible to be part of funding an anti-Israel, anti-American, anti-capitalist newspaper (and that was when I still called myself a Democrat). I still check it out online, but I like to think that my “Brave” browser ad blocker keeps me from sending too much money its way.

Still, even the San Francisco Chronicle occasionally has the capacity to surprise. For example, last fall, it had truly superior coverage of the fires ravaging the North Bay. In other words, when called upon to do actual, old-fashioned reporting, at least a few people can still do it correctly.

Today’s surprise was an article entitled In defense of Trump’s policies, written by Grady Means, a former adviser to Vice President Nelson Rockefeller. As is de rigueur for anyone who wishes to be taken seriously in today’s journalistic circles, Means doesn’t hold back on the Trump bashing:

I didn’t vote for Trump, don’t understand him, don’t think he has a great grasp of the issues, don’t care for his style.

Politics (derived from “poly,” meaning many, and “tics,” meaning blood-suckers) is an ugly business, and Trump certainly has not put any lipstick on that pig: His rhetoric and style demonstrate macro-aggression.

Yeah, yeah, we get it. You’ve established your bona fides. You’re not some crazed, hate-filled, racist, bigoted, homophobic Trump sycophant, we reasonable people are allowed to listen to you. Skipping past the ritualistic denunciations, though, one finds plenty of really good stuff in Means’ article:

Unemployment rates for African Americans, Hispanics and women are, dramatically, at new lows. That is real progress, which could be quickly undone by the hare-brained socialist schemes of Alexandria Ocasio-Cortez, the Democratic candidate for New York’s 14th congressional district, and Bernie Sanders.

Lower tax rates for companies and high-income individuals have attracted capital back to the United States; capital that sat offshore during the years when Obama couldn’t complete a speech without spitting out the words “taxes” and “fairness.”

So, would you rather have “fairness,” with higher taxes on the rich and companies, higher unemployment among minorities and everyone “fairly” poorer? Or would you prefer to have everyone better off, including the rich? America or Venezuela? You choose.

Democrats’ open-border policy is a knife in the heart of the economic prospects of African Americans, Hispanic citizens, women, young families and youth entering the labor market. An uncontrolled influx of undocumented, low-cost labor lowers wages and increases unemployment. Additional strain on health, human services and educational services also badly hurts all of these groups. Trump’s rhetoric is at (most) times clumsy and harsh, but he may not be wrong when it comes to defending the real interests of minorities, union members, the poor and their families.

There’s more in the same vein and I suggest you read it, even if you don’t have an ad blocker. This is the type of content that should be encouraged.

But it’s not just the article that I found intriguing for setting out blunt economic truths. What amazed me was a single comment, mixed in with the usual small number of conservatives congratulating the San Francisco Chronicle on publishing something sensible, and a huge dollops of Leftist outrage. Here’s that heartening comment:

Weird. I did not vote for Trump either. I have a visceral antipathy toward him, his speech, and his behaviors–but, I have been coming around to the point where–if I ignore what he is tweeting and saying–his practices and policies seem mostly to be effective and appropriate, more effective than those of other recent Presidents, and far more decent and humane than Bush and his wars. Politics is strange.

If you can abstain from reading the NYT and WaPo and watching CNN, and find hard news sources, even international ones, and watch what Trump does more than what he says, he is surprisingly effective and successful. I am concerned long term about the debt and the economy, and like everyone else I was mortified by the separation of children from parents, but the big picture is not all bad. The conflict with China has been out there waiting for us. This is a dangerous time, and we have a President with a kind of personality disorder, but we have what appear to be some unusual but pretty effective actions coming from the Administration. So far.

The here’s the Leftist claiming that Obama’s eight years of stagflation magically came to glorious economically magical fruition in January 2017. Trump’s done nothing, says SHAWN. It was all an Obama setup so that Trump could take the undeserved glory for a roaring economy. Even funnier is SHAWN’s denial that Democrats want open borders, as well as his denial that any facts, or reasonable inferences from those facts, can ever be acknowledged if conservative outlets highlight those facts. Here; see for yourself:

[Addressing Means:] You say you didn’t vote for Trump, but my goodness you spout endless republican orthodoxy and provide surface analysis at best.

Yes, the economy has received a boost since Trump took office. But unlike his predecessor, Mr. Trump didn’t inherit an economic meltdown in progress. Rather, he came in with an ongoing economic expansion underway. So how has Mr. Trump built on that expansion? By mortgaging the future in all too predictable ways. The tax cuts have added staggering amounts to the national debt. Additionally, data from the last quarter shows that while GDP had continued to grow, wages did not, instead stagnating. All of this creating the perfect storm for the republicans. When the economy next stalls, we won’t be able to afford “entitlements” and cuts will have to be made to programs designed to help the middle and low classes; all well after the wealthy already got theirs.

With respect to the European Union, before Mr. Trump pulled his usual bull in a china shop routine there were long in place negotiations already taking place to address tariffs. He created a disaster, got back to where he started, and calls it a victory.

Saying the democrats have an “open border” policy is a typical right wing trope that fails to consider that the Obama administration deported literally tens of thousands more than the Bush administration had. Likewise, illegal crossing were consistently trending downward before Mr. Trump took office.

The knife aimed at the heart of black/Hispanics/young/women is not migrants. Rather, it is a 30 year republican habit of starving educational programs and consistently rewarding corporations with all manner of largesse.

I am running out of space for further rebuttal. More’s the pity, as the rebuttal is necessarily long.

@Gradymeans You have got to be kidding me. You think citing someone from the Hoover Institute who gets an opt-ed in the Chronicle represents facts? Lordy, please try again.

I picked the picture for this post with care. It’s the front page from a 2009 edition of the San Francisco Chronicle, showing (a) Obama boasting about fixing the economy, a fix that, eight years later, had him saying “I’ve fixed it to be weak forever,” and (b) a story about the Chronicle’s failing finances. Food for thought there, right?