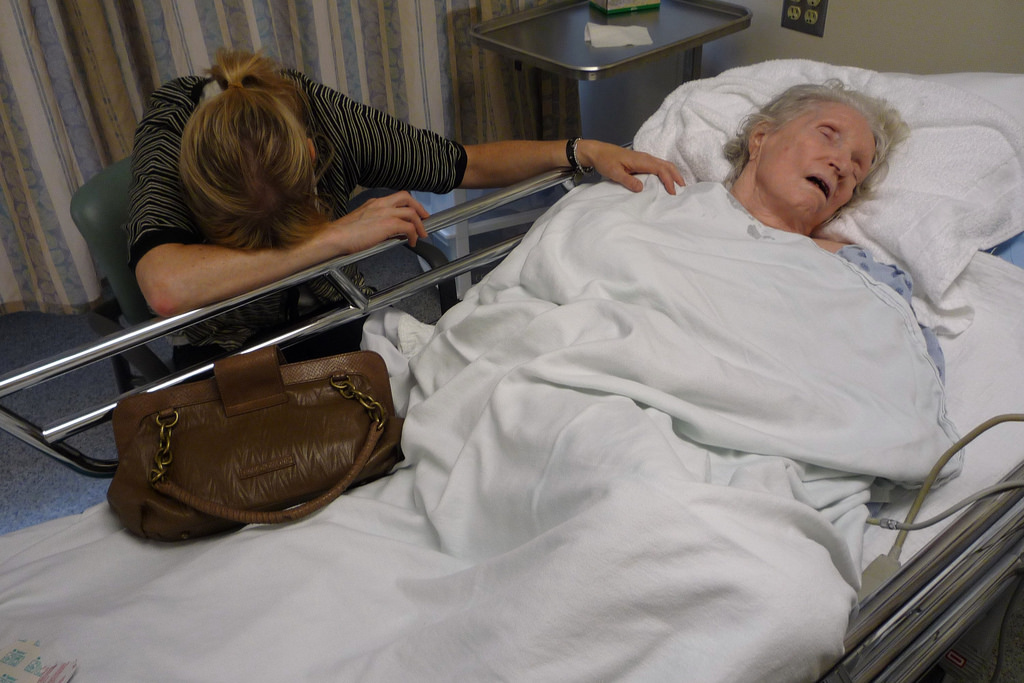 Socialists touted euthanasia as a humane end for people under socialized medicine’s protective umbrella, but a story from Holland hints that this was a lie.

Back in 2002, I heard a very smug Dutchman on an NPR show (All Things Considered? Terry Gross? I can’t remember) shortly after Holland passed its law making euthanasia illegal. The Dutchman assured his NPR host that the law would never be abused in Holland because the country had socialized medicine. He was arrogantly certain, however, that euthanasia should never be put in place in America, which was already seeing its own push for euthanasia. His rationale was that, because people did not have socialized medicine in the U.S., they would be way too hasty to kill grandma to save on medical costs.

For me, 2002 was a fairly pivotal year politically. Although I didn’t honestly acknowledge my conservativism until 2004 (when I started this blog), I had already traveled far down the road away from my unthinking loyalty to the Democrat party. NPR’s relentlessly anti-Israel coverage in the 1990s had soured me on the station and made me suspicious of its viewpoint on other issues. I was also dismayed by the Democrat response to 9/11, which consisted of blaming America rather than blaming Islamic terrorism. Just as I questioned NPR’s viewpoint, I now began to wonder whether the Democrat Party aligned with my values.

Lastly, having seen England’s socialized medicine in play during the early 1980s, I was not impressed with it. It was great if you had a cold; not so great for anything else. When my father’s hip finally gave out, he was in surgery six weeks later. When my friend’s mother’s hip gave out, she was “on the list” for the next decade. She died still in a wheelchair. It reminded me strongly of my aunt, the one in East Germany, who’d been on a list for nine years to get her useless kitchen sink repaired. Socialism is better at waiting lists than it is at providing actual services.

Moreover, when it came to socialized medicine, I had finally figured out that Europe’s socialized medicine came courtesy of the US taxpayer. Because we bore the brunt of Europe’s defense costs, Europeans had extra money lying around to fund the “free” medical care they so smugly waved in front of Americans. Moreover, having begun to expand my reading, I was beginning to suspect that “socialism” on the whole was about power, not love of citizens.

All this meant that, when this smug Dutchman went on about Europe’s altruistic socialized medicine making euthanasia just another healthcare choice, I was dubious. It struck me that the state will never love you as much as your family will. Families will bankrupt themselves for their loved ones; the state does not have that moral or emotional impulse.

My feelings about familial love became very clear with the Terri Schaivo matter. While her husband, who was not a blood relative, was happy enough to see her consigned to an early grave, her parents would have done absolutely anything to keep her alive. Blood matters, both when it comes to life and death. (Incidentally, I was not entirely unsympathetic to the husband, a young man, who wanted a physical and emotional relationship. It just struck me that, in this day and age, when marriage is optional even for those having children, he could have had the relationship without first killing his wife.)

As I write this, I don’t know whether Americans, in thrall to the vagaries of non-socialized medicine, have been letting family members die en masse, nor do I know whether Obamacare staved off a nightmare of American medical execution. I do know, though, that Europe has become enthusiastic about euthanasia in a way that strikes me as unseemly, if not scary. In Belgium, euthanizing children is now legal:

A terminally ill minor has been helped to die in Belgium for the first time since the country did away with age restrictions on euthanasia two years ago, according to the senator who wrote the law.

He said the minor was from Belgium’s Flemish region, but declined to provide any further details about the patient to protect the privacy of the grieving family.

Belgium is the only country that allows minors of any age assistance in dying, De Gucht said. In Holland, the lower age limit for euthanasia is 12 years.

I am well aware that I have been blessed in that my children have not experienced a terminal illness, nor have any of the children in my orbit (relatives, neighbors, my children’s friends, etc.). I have neither first-hand nor second-hand experience of that kind of suffering. I just worry as a matter of principle when killing becomes too easy. I’ve also never forgotten those people I know who had terminal illnesses, both friends and family, and who spoke in the early days about offing themselves — only to decide on each step of their journey to death that they still wanted to live, provided that they had decent pain management.

In the same way, I’m dubious about Europe’s embrace of euthanasia — something that was promised to be limited to terminal illnesses — being extended to mental illness:

Once prohibited — indeed, unthinkable — the euthanasia of people with mental illnesses or cognitive disorders, including dementia, is now a common occurrence in Belgium and the Netherlands.

This profoundly troubling fact of modern European life is confirmed by the latest biennial report from Belgium’s Federal Commission on the Control and Evaluation of Euthanasia, presented to Parliament on Oct. 7.

Belgium legalized euthanasia in 2002 for patients suffering “unbearably” from any “untreatable” medical condition, terminal or non-terminal, including psychiatric ones.

In the 2014-2015 period, the report says, 124 of the 3,950 euthanasia cases in Belgium involved persons diagnosed with a “mental and behavioral disorder,” four more than in the previous two years. Tiny Belgium’s population is 11.4 million; 124 euthanasias over two years there is the equivalent of about 3,500 in the United States.

The figure represents 3.1 percent of all 2014-2015 euthanasia cases — and a remarkable 20.8 percent of the (also remarkable) 594 non-terminal patients to whom Belgian doctors administered lethal injections in that period.

Of course, Europe’s drift in this direction when it comes to mental illness is part of a modern Western culture that embraces mental illness — taking it so seriously that we no longer accept that there are biological sex differences and insist that people are whatever sex they want to be, including dragon or alien. (If I ever find myself at an event in which I’m asked to identify my pronouns, they will be “MAGA” and “Trump is the greatest president ever”). But I digress.

I want to work my way back to that smug Dutchman who insisted that, safe within the confines of Europe’s (American-funded) cradle-to-grave care, euthanasia would always be a gentle, voluntary procedure, free from the demands of selfish or greedy relatives, in addition to being (he implied) unaffected by the state’s dictates. I was dubious then, so this horror story from Holland did not come as a surprise to me (h/t Daily Wire), even though it appears that the doctor’s and relatives’ enthusiasm for administering medical death went too far even for the Dutch government:

A euthanasia case in the Netherlands made international headlines last year after it came to light that a woman was euthanized against her will. Now, the doctor who killed her is finally being held responsible.

The patient, who has not been identified, was 74 years old and reportedly suffering dementia. She was living in a nursing home, and had previously said she wanted to undergo assisted suicide when “the time is right.” However, she never put in a request for assisted suicide, so even though her dementia had progressed to the point that she was no longer capable of giving her consent, one of the senior doctors declared her to be “suffering intolerably” and decided to have her euthanized.

When the doctor came in to euthanize her, the patient was not informed of what was going to happen to her, to “avoid unnecessary distress.” She was given coffee with a sedative in it, but she refused to drink it — and then struggled as the doctor tried to kill her. She fought so fiercely that the doctor ordered her own family to physically hold her down, and she was forcibly euthanized.

Previously, a panel had cleared the doctor of any wrongdoing, saying she “acted in good faith.” But now, the Regional Euthanasia Review Committees has said that her actions were unethical, and the case has been passed on to the review board for further investigation.

The claim that the woman had wanted to die through assisted suicide is now being disputed, too. Her living will was said to be contradictory, and while on some days she did say she wanted to die, on others she said she wanted to live.

Disturbingly, five other cases are under investigation for similar ethical oversteps. (Emphasis mine.)

Let me say again what I’ve said numerous times before: THE STATE DOES NOT LOVE YOU. THE STATE WILL NEVER LOVE YOU. YOU HAVE NO PERSONAL RELATIONSHIP WITH THE STATE. UNLESS YOU HAVE WINKLED YOUR WAY INTO ITS INNERMOST SANCTUM, BECOMING ONE OF THOSE SCARY, POWER-HUNGRY “DEEP STATISTS,” YOU WILL NEVER BE MORE THAN A WIDGET TO THE STATE.

Moreover, in a world in which the state views you as a widget, don’t be surprised if your fellow citizens (including your family) start viewing you as a widget too. As for me, at this point in my life, I’d like to live in a culture that views imposing death on its citizens as an affront rather than a norm that should be encouraged.

(Regarding the photo I used, which I found in on Flickr, I mean no disrespect by using it and am not implying in any way that it shows someone dying anything but a natural death. I actually thought it was a very moving image of an elderly person’s journey from life to death . . . and death’s effect on loved ones.)