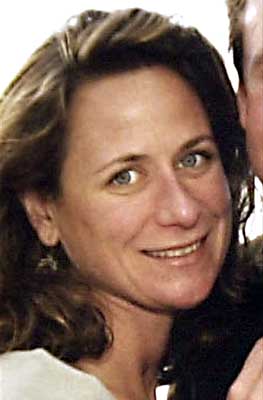 This post honors Lauren Catuzzi Grandcolas, one of the heroes who saved America from an even worse disaster than the attack on the Twin Towers. I met Lauren when I was at law school. She was still an undergraduate, but roomed with a friend of mine who had been one of her sorority sisters. The very first time I saw Lauren, she’d been experimenting with hair colors, and had hair that was this beautiful combination of all sorts of different shades of red. I was very impressed. The next time I saw her, several months later, I remarked that I loved her red hair. I still remember the quizzical look Lauren shot me. What I hadn’t noticed (which says a lot more about me than about Lauren) is that she’d reverted to her natural, and very lovely, chestnut color. But Lauren, being a remarkably charming and kind woman, did not call me out on my foolishness.

Lauren finished her undergraduate studies while I was still at law school. She then headed out to San Francisco to start her career. A year later, I finished law school and returned to San Francisco, so I looked her up, and we had lunch together. She was working as an aerobics instructor at a fitness center in Marin, but was trying to find meatier work to match her abilities. I put her in touch with the recruitment coordinator at my law firm and Lauren ended up with a job.

Being a recruitment coordinator was the perfect job for Lauren. To be an effective law firm recruiting coordinator, you need to be social, intelligent, attractive, organized, hard-headed, and self-assured. Lauren was all of those things. Long after I left the firm, she was still working there, bringing together the best law school grads with a solid law firm.

Although we saw each other regularly in the hallway, and always stopped to chat, Lauren and I never became close friends. I admired her a great deal (especially her organizational abilities) and I always had the feeling she liked me, but we never clicked. I think of her often, though, and for a very funny reason: Every time I clean the kitchen sink, she pops into my mind.

In about 1988, I went to her apartment for dinner. She and husband were delightful hosts — relaxed and friendly — and the food was delicious. After dinner, I hung out with them in the kitchen while Lauren cleaned up. And, oh my goodness, did she clean up. It turns out Lauren was not just organized, she was a neat-freak. The last thing she did, after I thought every surface was already immaculate, was to take a toothbrush out and carefully scrub around the kitchen faucet. Nowadays, I don’t do that task with Lauren’s regularity, but every time I take out my toothbrush and head for the faucet, I think of her.

By 1989, I stopped seeing Lauren altogether. I still heard about her through our mutual friend, so I knew that she was living a busy and happy life. What I didn’t know was that she lived in Marin County, where I eventually moved. Had I known, I would undoubtedly have looked her up, and we would have spent a nice lunch together.

As it was, on September 13, 2001, I brought my copy of the Marin Independent Journal into my house, pulled it out of the plastic wrapper, and found myself staring at a large photo of Lauren’s lovely face. “That looks like Lauren,” I thought. “I wonder what she did to get on the front page.” I was staggered when I learned she had been a passenger on Flight 93 on 9/11. Lauren had been back to New Jersey for her grandmother’s funeral and was flying home again. She was two months pregnant.

In her last hours of life, Lauren did not get a chance to speak to her husband, only to his answering machine. Unsurprisingly, her words were meant to comfort him. She assured him that she was safe, and well, and that she loved him. Knowing Lauren, knowing her energy, optimism, and strength (both physical and mental), I am absolutely certain that she was one of the passengers who was actively involved in recovering Flight 93 from the terrorists and helping save the White House from a direct hit.

[This past June, I visited the 9/11 Memorial Museum in New York. I discovered then that Lauren’s husband had authorized the museum to play the answering machine Lauren let for him. I already knew the words she said, but it was absolutely shattering to hear her voice. If you did not understand English, but only heard her tone, you’d never realize that she was an a hijacked flight and already had a good idea that she was staring into the abyss. Her voice is so calm and loving, and so utterly without fear, that I know, I absolutely know, that Lauren was one of the actors in that desperate mid air flight that so the plane crashing into a field in Pennsylvania, thereby saving America from a cataclysmic attack on Congress.]

After she died, Lauren’s sisters, working with her husband, completed the book that was Lauren’s big project in the last months of her life. Typically for Lauren, it was a book, not just about having dreams, but about living them. It’s called You Can Do It! : The Merit Badge Handbook for Grown-up Girls. You can read here a little more about Lauren, her sweetness, her family and her legacy.

Here’s a Facebook post a local reporter did about Lauren a few years ago. It’s very moving: