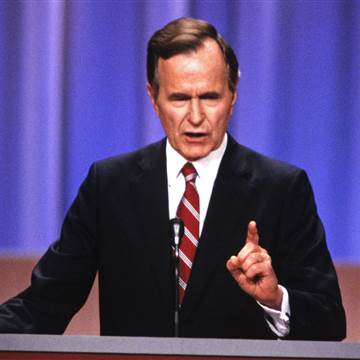 I met President George H. W. Bush for only a minute a long, long time ago, but I still remember his diplomatic polish when I slightly blindsided him. 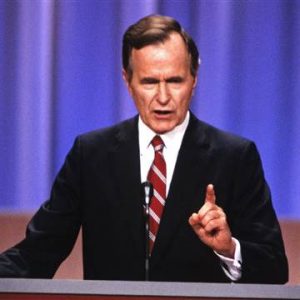 When I was in law school, my Constitutional Law professor was Philip Bobbitt, LBJ’s nephew. He was, if I remember correctly, a very good teacher. He was also — as you can imagine — politically well-connected.

So it was that, when then-Vice President George H. W. Bush came to town to give a speech, Professor Bobbitt announced to the class that, if any of us were willing to do a little bit of work, such as helping people to their seats, we could attend the talk for free. Free? Count me in.

I remember absolutely nothing about Vice President Bush’s talk. I was a Democrat then and, while I had nothing of the hostility towards Republicans that today’s Democrats display, I wasn’t a fan. I was also very non-political at the time. My Democrat political leanings were knee-jerk, not informed, so anything substantive he had to say almost certainly shot over my head.

Nevertheless, after the Bush’s speech, I joined those who had lined up to shake Bush’s hand. Indeed, one of my friends had specifically asked me to do so. She came from a Texas ranching family and had grown up in the same neighborhood as the Bush clan. (She was a little older than I am, so she would have been just a bit younger than Dubya.) “If you’re going to see George,” she told me, “please tell him that I send him my love.”

So it was that, when it was my turn to shake Bush’s hand (I also think I got to shake James Baker’s hand, but I don’t quite remember), I said to him, “Jane Doe [not her real name] asked me to give you her love.”

What happened next was fascinating. Bush’s eyes went completely blank. It was clear to me that, in the press of the crowd, he couldn’t remember who Jane was. Within less than a second, though, he had recovered. “Oh, Jane! Of course. Please give her my best regards.” He still didn’t remember who Jane was, but he was completely master of the situation.

I was impressed by the polished way Bush handled a ball from left field. Had I not been watching his eyes, I never would have realized that my out-of-the-blue statement threw him.

And that’s my President Bush 41 story.