With the Left now gunning for Dr. Seuss, it’s tempting for conservatives reflexively to support him — but they may want to think twice about doing so. 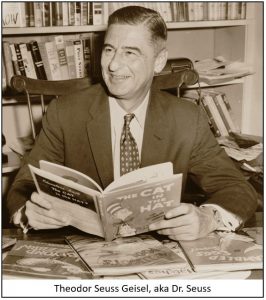 I’m sure that you’ve already heard that, per the most recent Leftist purge of pre-woke people, ideas, and books, a new study states that Dr. Seuss (aka Theodor Seuss Geisel), probably the most famous children’s book writer in America, has now landed on the naughty list:

“[This study reveals] how racism spans across the entire Seuss collection, while debunking myths about how books like Horton Hears a Who! and The Sneetches can be used to promote tolerance, anti-bias, or anti-racism,” Katie Ishizuka and Ramón Stephens write in their February 2019 report, “The Cat is Out of the Bag: Orientalism, AntiBlackness, and White Supremacy in Dr. Seuss’ s Children’s Books,” as part of St. Catherine University’s Research on Diversity in Youth Literature.

They continue: “Findings from this study promote awareness of the racist narratives and images in Dr. Seuss’ children’s books and implications to the formation and reinforcement of racial biases in children.”

The study continues by explaining that some of the most iconic characters relay the troubling messages of Orientalism (the representation of Asia and Asian people based on colonialist stereotypes), anti-blackness and white supremacy.

“Notably, every character of color is male. Males of color are only presented in subservient, exotified, or dehumanized roles,” the authors write as part of their findings. “This also remains true in their relation to White characters. Most startling is the complete invisibility and absence of women and girls of color across Seuss’ entire children’s book collection.”

I know that conservatives will be tempted to cling more tightly to Dr. Seuss’s books now that he’s persona non grata on the Left, but I’m not sure that’s a good idea. I know he’s dead, but the fact is that, whether you’re coming at him from a leftist or a conservative perspective, he wasn’t that great a person and pouring more money into his estate may end up feeling as wrong for you as it does now for the lefties. Here are a few interesting points about Theodor Geisel the man, and Dr. Seuss the writer:

First, Geisel was a lifelong Democrat.

Second, Geisel was a typical Democrat racist in the years leading up to and during WWII. His early drawings showed blacks as savages and, especially during WWII, Japanese as evil (a view shared by most Americans after Japan’s unprovoked attack on Pearl Harbor, throughout the horrific war years in the Pacific, and upon learning about the torture the Japanese visited on POWs).

Fourth, to be fair to Geisel, all children’s books before about the 1970s, except for the exquisite The Snowy Day by Ezra Jack Keats’ (whom I always thought was black and just discovered was Jewish and white), unthinkingly focused on white kids. Whites were the vast majority in America and, outside of major urban areas and the less populated South, most people didn’t even have minorities in their frame of reference. This narrow frame of reference, combined with focusing on the most massive part of the mass market, meant that children’s book authors probably excluded minority characters without malice. They just did….

Fifth, still being fair, the most memorable Dr. Seuss books still read today are heavy on non-human characters. Sure, the kids in The Cat In The Hat are white, but who remembers them? It’s the non-human Cat and the non-human Things 1 and 2 that linger in people’s memories. Likewise, books such as Yertle the Turtle, Green Eggs and Ham, The Grinch Who Stole Christmas, and Hop on Pop, are about non-human characters.

Sixth, Geisel came to regret his early racism. His most significant allegorical work about racism was Horton Hears a Who, first published in 1955.

Perhaps you remember the plot: Horton hears a voice speak from a small speck of dust. He realizes that there is life on that minute speck and, despite extremely hostile action from a kangaroo and her joey, monkeys, and an evil eagle. No matter the opposition, Horton fights to save that speck and the life upon it, repeatedly saying “A person is a person no matter how small.” Eventually, the smallest of those small persons on Whoville makes enough noise that everyone in Horton’s Jungle of Nool hears and agrees to protect that speck and the life upon it.

The commonly accepted history of Horton Hears a Who is that it represents Geisel’s about face regarding the Japanese in the years after WWII (hyperlinks omitted):

Geisel began work on Horton Hears a Who! in the fall of 1953. The book’s main theme, “a person’s a person no matter how small”, was Geisel’s reaction to his visit to Japan, where the importance of the individual was an exciting new concept. Geisel, who had harbored strong anti-Japan sentiments before and during World War II, changed his views dramatically after the war and used this book as an allegory for the American post-war occupation of the country. He dedicated the book to a Japanese friend.

Seventh, what’s really funny about Horton Hears a Who is that, while you have to work really hard to see it as an allegory for Japan, which had started the war against the U.S., fought it with unabashed fury, abused POWs and civilian internees with unbelievable ferocity, and refused to surrender, it actually works effortlessly as an allegory against abortion.

I mean, it’s so obvious. That speck upon which life exists isn’t just Whoville, it’s a zygote. After all, as Horton says with numbing repetition, “a person’s a person no matter how small.” In a world dedicated to abortion, Horton is the ultimate pro-Life activist.

To that end, Horton stands up against the angry feminist and her brainwashed child (the kangaroo and joey), the Leftist mobs (whether in the streets or the state houses), and the abortionist (that’s the evil eagle determined to destroy life at all costs). Through it all, Horton clings to one principle: Life is life. You cannot parse it away simply because it’s too small to see or its voice is too quiet to hear.

Sadly, it’s certain that Geisel would resent my pro-Life spin. Indeed, true to his life-long Democrat credentials, Geisel was staunchly pro-abortion and aggressively fought against having his name associated with pro-Life projects. In other words, even as Geisel/Seuss was writing, “a person’s a person no matter how small,” he didn’t really mean it. Moreover, his widow has continued that anti-Life legacy, by being a long-time Planned Parenthood funder:

“It has been well known for years around San Diego that the Geisels were pro-abortion and active supporters of the local Planned Parenthood affiliate,” said Operation Rescue spokesperson Cheryl Sullenger, who lived in San Diego for 23 years. “Many years ago, I remember seeing Dr. Seuss at a Planned Parenthood fundraiser that we were protesting. People find it hard to believe that someone who could write such amazing children’s stories could support the brutal killing of innocent children through abortion. His wife, Audrey, has been very active in her support for the abortion group over the years, and our documents prove that.”

It’s ironic, really, that both Dr. and Mrs. Seuss, whose fortune came from children’s books, so enthusiastically supported killing their customer base.

Given the facts, perhaps it’s time for everyone, both leftist and conservative, to stop buying Dr. Seuss books. He was a racist, sexist, baby-hating monster. Why in the world is he even still being published, much less being published as a beloved children’s book author? I find myself in agreement with the Lefties when it comes to suggesting that Theodor Seuss Geisel comes with way too much baggage to be a worthy author of today’s children’s books.