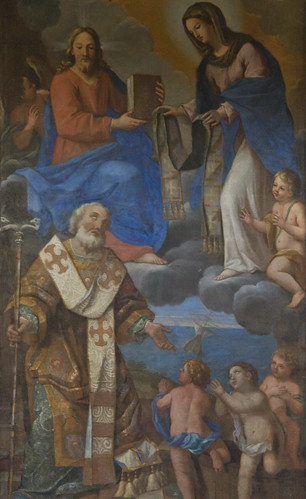 Feast of St Nicholas – Yes, Virginia, there is a St. Nickolaus . . . and his feast day is today. The Santa Claus we associate with Christmas is a melding of the legends of St. Nickolaus and Odin as filtered through the Dutch. The actual St. Nickolaus was a 4th century Bishop of Myra famous for his gift giving:

After his parents died, Nicholas is said to have distributed their wealth to the poor. In his most famous exploit, which is first attested in Michael the Archimandrite’s Life of Saint Nicholas, Nicholas heard of a devout man who once had been wealthy, but had lost all his money due to the “plotting and envy of Satan.” The man had three daughters, but could not afford a proper dowry for them. This meant that they would remain unmarried and probably, in absence of any other possible employment, be forced to become prostitutes. Hearing of the girls’ plight, Nicholas decided to help them, but, being too modest to help the family in public (or to save them the humiliation of accepting charity), he went to the house under the cover of night and threw a purse filled with gold coins through the window opening into the house. He did the same thing the next two nights, giving the man a total of three bags of gold, one for each of his three daughters.

According to Michael the Archimandrite’s version, on the third night, the father of the three girls stayed up and caught Saint Nicholas in the act of the charity. The father fell on his knees, thanking him. Nicholas ordered him not to tell anyone about the gift. The scene of Nicholas’s secret gift-giving is one of the most popular scenes in Christian devotional art, appearing in icons and frescoes from across Europe. Although depictions vary depending on time and place, Nicholas is often shown wearing a cowl while the daughters are typically shown in bed, dressed in their nightclothes. . . .

The Feast Day of St. Nicholas is celebrated widely throughout all of Europe as a St. Nickolaus Day celebration that begins with a worship service. Then there are the giving of gifts, parades and other local traditions.

In Europe, especially in “Germany and Poland, boys would dress as bishops begging alms for the poor.” In Ukraine, children wait for St. Nicholas to come and to put a present under their pillows provided that the children were good during the year. Children who behaved badly may expect to find a twig or a piece of coal under their pillows. In the Netherlands, Dutch children put out a clog filled with hay and a carrot for Saint Nicholas’ horse. On Saint Nicholas Day, gifts are tagged with personal humorous rhymes written by the sender.

And what Christian festival would be complete without some nod to pre-Christian pagan practices. In many of the European celebrations, St. Nickolaus is accompanied by Krampus, a half-goat, half-demon, While St. Nickolaus rewards the good boys and girls, Krampus is there to punish the bad ones.

Krampus carries chains, thought to symbolize the binding of the Devil by the Christian Church. He thrashes the chains for dramatic effect. The chains are sometimes accompanied with bells of various sizes. Of more pagan origins are the Ruten, bundles of birch branches that Krampus carries and with which he occasionally swats children. The Ruten may have had significance in pre-Christian pagan initiation rites. The birch branches are replaced with a whip in some representations. Sometimes Krampus appears with a sack or a basket strapped to his back; this is to cart off evil children for drowning, eating, or transport to Hell. Some of the older versions make mention of naughty children being put in the bag and taken away. . . .

How charming. And in some of the locales where Krampus appears, he is given his own celebration, Krampusnacht, on the eve of the Feast of St. Nickolaus. It is the night Krampus visits all the devilish rugrats.

1240 – Kiev falls to the Mongols under Batu Khan

The Mongol invasions and domination of Russia, Ukraine, then Eastern Europe, beginning in 1237 A.D. and finally ending in 1480 A.D., were bloody affairs with lasting historical consequence. Besides the mass slaughters, the devestations to the economies of these areas, and later the enslavement of large numbers of these slavic peoples (the origin of the word “slave”), the Mongols have been blamed for the destruction of Kievan Rus’, the breakup of the ancient Rus’ nationality into three components and the introduction of the concept of “oriental despotism” into Russia.

The Mongols first invasion of Russia began in 1237. By the 28th of November, 1240, the Mongols had reached Kiev, then a major capitol city with a population of 50,000, and put it under siege. Eight days later, on this date in 1240, the city fell. The Mongols sacked the city and slaughtered all but 2,000 of the inhabitants. Giovanni de Plano Carpini, the Papal envoy to the Mongol Khan, wrote of his later travel through Kiev:

They [the Mongols] attacked Rus’, where they made great havoc, destroying cities and fortresses and slaughtering men; and they laid siege to Kiev, the capital of Rus’; after they had besieged the city for a long time, they took it and put the inhabitants to death. When we were journeying through that land we came across countless skulls and bones of dead men lying about on the ground. Kiev had been a very large and thickly populated town, but now it has been reduced almost to nothing, for there are at the present time scarce two hundred houses there and the inhabitants are kept in complete slavery.

The English Civil War (1642-1651) pitted a largely Protestant Army loyal to Parliament against the largely Anglican Army loyal to the tyrannical King Charles I. Near the end of the first phase of the war in 1646, Charles I had been captured by the Scots and transferred to control the Parliamentary Forces, by then known as the New Model Army being led by Thomas Fairfax with Oliver Cromwell his second in command.

The Long Parliament then in session wasn’t sure what to do with Charles I. Many of them were willing to countenance his return to the throne under strict limits on his power and began negotiations with Charles I in 1648. The leadership of the New Model Army was livid believing with some justification that Charles I had no intention of negotiating in good faith. The Army sent a remonstrance to Parliament, requesting they cease negotiations, but the Parliament overwhelmingly rejected it. Pride’s purge followed.

Colonel Thomas Pride of the New Model Army arrived at Parliament on this day in 1648 and stationed his soldiers at the doors and in the building. Working from a list of those Members of Parliament who were sympathetic to the King, Pride arrested 45 of them and the rest, seeing what was transpiring, left and went into hiding. Of the 487 members of the long Parliament, only 200 remained to sit in what became known as the Rump Parliament.

The Rump Parliament moved quickly to bring Charles I to Windsor Castle in London and to put him on trial for High Treason. On January 30, 1649, after going through the motions of a trial, they executed Charles I. Soon after,the Rump Parliament abolished the House of Lords and the Monarchy, paving the way for Oliver Cromwell’s protectorate.

The illegalities of Pride’s Purge and the trial of Charles I were so blatant that not even the most vociferous opponents of the King would defend them. Those illegalities played a role in the restoration of the monarchy in 1660 and the triumphant return to power of the Anglican bishops. The latter would play a significant role in the increasing animosities between Britain and her American colonies more than a century after the events.

1904 – In response to troubles in the Dominican Republic, Theodore Roosevelt articulated his “Corollary” to the Monroe Doctrine, stating that the U.S. would intervene in the Western Hemisphere should Latin American governments prove incapable or unstable. It made of the U.S. a regional policeman. Roosevelt and successor Presidents relied on the doctrine for the next 30 years to justify additional military interventions in Cuba (1906–1909), Nicaragua (1909–1910, 1912–1925 and 1926–1933), Haiti (1915–1934), and again in the Dominican Republic (1916–1924).

1912 – The Nefertiti Bust is discovered in an ancient workshop in Egypt. Nefertiti had been the wife of Pharaoh Akhenaten. Anthropologists and historians dated the bust to 1345 B.C. It is one of the most copied works of ancient Egypt, something that has made of Nefertiti one of the most famous women of the ancient world.

1421 – Henry VI of England, an unstable and ineffective ruler who lost the Hundred Years War to France. He was deposed during the Wars of the Roses and died in captivity.

1896 – Ira Gershwin, a lyricist who teamed with his composer brother, George Gershwin, to produce numerous popular songs in the early 20th century.

1779 – Jean-Baptiste-Siméon Chardin, the son of a cabinet maker who became a premier French painter of still life and children under the patronage of Louis XV.

Silver Bells was a song written about 1950 and popularized in the Bob Hope movie, The Lemon Drop Kid.

Carol of the Bells is a song written in 1914 with the melody borrowed from a Ukrainian folk song.

And for a long play of Christmas Music . . . the Boston Pops