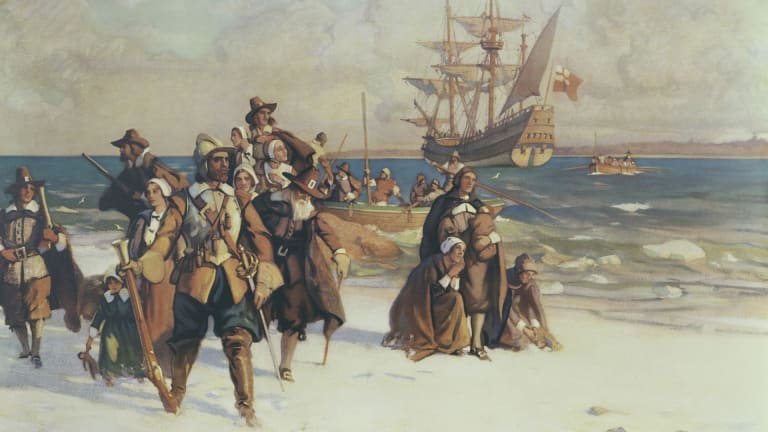 Holidays and Observances on December 21

Feast Day of Thomas the Apostle. Thomas was one of the twelve apostles of Christ. He is most famous for giving us the phrase, “Doubting Thomas.”

The phrase comes from John 20:24–29, wherein the author recounts how Thomas, when first told that Jesus had risen from the dead, stated his disbelief:

The gospel recounts that Jesus later appeared to Thomas and invited him to touch his wounds. Thomas was finally convinced, saying, “My Lord and my God”. Jesus then said, “Thomas, because thou hast seen me, thou hast believed: blessed [are] they that have not seen, and [yet] have believed.”

After Jesus ascended, Thomas left Jerusalem and evangelized in India. He was martyed there, killed upon the order of an Indian King, in the year 64 A.D. Nearly one hundred and fifty years after his death, someone penned The Acts of Thomas. Early church fathers deemed the work apocryphal and did not include it in the Holy Bible.

splendour of light eternal and sun of righteousness:

Come and enlighten those who dwell in darkness and the shadow of death.

(Note: A literal translation of the Latin yields “O Rising Sun”, but the poetic “O Morning Star” or “O Dayspring” is often preferred.)

“The people who walked in darkness have seen a great light; those who lived in a land of deep darkness—on them light has shined.” Isaiah 9:2 The word ‘pilgrim’ means a person who undertakes travel for religious reasons. In the instant case, the word “pilgrim” describes those Puritans who came to America in 1620 to escape religious persecution and to create their own religious society in the New World.

Puritans were a Christian sect, part of a larger group of Protestant sects, such as Presbyterians and Baptists, referred to as “Religious Dissenters,” because they dissented from England’s state religion, Anglicanism. Puritans were being persecuted for their faith in 16th and 17th century England, so one particular congregation, led by William Bradford, opted to leave England in 1607 and resettle in the Netherlands.

Consequently, Bradford negotiated with a group of businessmen in England, the Merchant Adventurers, who were willing to underwrite travel to the New World in return for a share of expected profits. The congregation, seeing this as their opportunity to set up a colony free to worship as they pleased and free to create their own cloistered culture, began their pilgrimage from the Netherlands in 1619 intending to make landfall in Virginia.

A storm drove them into a harbor near Plymouth Rock and, on this date, with provisions – especially beer – running low, they stepped off their ship, The Mayflower, and onto Plymouth Rock, intending to make the area their new home. The Plymouth colony barely survived its first year, but then it began to thrive. Plymouth colony would last until 1691, until it merged with Massachusetts Bay Colony.

That was hardly the end of Puritan influence on this nation, though. Puritans, along with other religious dissenters, particularly those with roots in Calvinism, would later drive the American Revolution. As British author Horace Walpole would quip before Britain’s House of Commons, at the start of the American Revolution, “Cousin America has eloped with a Presbyterian parson.”

1937 – Premier of Disney’s Snow White and the Seven Dwarfs.

Snow White was a story first published in 1812 by the Brothers Grimm in the first edition Grimms’ Fairy Tales. Their version of the story, with the evil Queen being tortured to death in red hot iron slippers, was decidedly darker than the story as rewritten for Walt Disney.

Disney adapted his version to the silver screen and, on this date in 1937:

[It] premiered at the Carthay Circle Theatre on December 21, 1937, followed by a nationwide release on February 4, 1938. It was a critical and commercial success, and with international earnings of $8 million during its initial release briefly held the record of highest-grossing sound film at the time. The popularity of the film has led to its being re-released theatrically many times, until its home video release in the 1990s. Adjusted for inflation, it is one of the top-ten performers at the North American box office and the highest-grossing animated film.

Snow White was nominated for Best Musical Score at the Academy Awards in 1938, and the next year, producer Walt Disney was awarded an honorary Oscar for the film. This award was unique, consisting of one normal-sized, plus seven miniature Oscar statuettes. They were presented to Disney by Shirley Temple.

Film critic Roger Ebert reflected on the importance and legacy of the film in 2001:

“Snow White and the Seven Dwarfs” was immediately hailed as a masterpiece. (The Russian director Sergei Eisenstein called it the greatest movie ever made.) It remains the jewel in Disney’s crown, and although inflated modern grosses have allowed other titles to pass it in dollar totals, it is likely that more people have seen it than any other animated feature. The word genius is easily used and has been cheapened, but when it is used to describe Walt Disney, reflect that he conceived of this film, in all of its length, revolutionary style and invention, when there was no other like it—and that to one degree or another, every animated feature made since owes it something.

Conflict between America and Qadaffi’s Libya began on August 19, 1981, when two Libyan aircraft fired on U.S. aircraft doing a routine patrol over international waters in what became known as the Gulf of Sidra incident. The U.S. shot down both jets.

Libya’s strongman Qaddafi claimed that the entire Gulf of Sidra was Libyan territory and to cross into it was to cross a “line of death.” President Reagan imposed a variety of diplomatic and economic sanctions on Libya, but then after evidence established that Libya was responsible for a 1986 bombing in a German disco that killed two American soldiers, Reagan responded with air strikes on Libya and put greater economic pressure on Libya.

On this date in 1988, Pan Am Flight 103 was flying from Frankfurt to Detroit. As it passed over Lockerbie, Scotland, a bomb exploded in the cargo hold, killing all 259 people aboard and 11 people on the ground who died when struck by pieces of the aircraft falling to earth. A massive investigation followed. Three years later, the UK issued indictments for murder against Abdelbaset al-Megrahi, a Libyan intelligence officer and the head of security for Libyan Arab Airlines (LAA), and Lamin Khalifah Fhimah, the LAA station manager in Luqa Airport, Malta.

Qadafi, claiming no knowledge of the terrorist act, nonetheless handed the two men over to the UK for trial in 1999. It marked the end of Libya as a major sponsor of terrorism. 1124 – Pope Honorius II is consecrated, having been elected after the controversial dethroning of Pope Celestine II. Honorius was a brilliant man of peasant stock. He is most remembered for authorizing the formation of the Knights Templar.

1237 – After the death’s of the sons of Ghengis Khan, Batu Khan became the most powerful of the Mongolian warlords. After creating the Golden Horde, he began an invasion of the Ukraine and Russia. After a siege and six days of bloody battle, on this day in 1237, Batu Khan broke through into the city of Ryazan, annihilating the population and destroying the city.

1361 – The Islamic Armies of the Emirate of Granda had gone on an offensive, laying waste to towns and capturing Christian slaves in Jaen. On this date, force of the Kingdoms of Castile and Jaen laid a trap for the Muslim invaders and, in the ensuing Battle of Linuesa, slaughtered the Muslim army nearly to a man.

1826 – American settlers in Nacogdoches, Mexican Texas, declare their independence, starting the Fredonian Rebellion. It marks the start of the Texas Revolution against Mexico.

1963 – The Ottoman Empire had, in 1570, invaded the Greek island of Cyprus, and thereafter ruled over much of the native Greek population until losing the island to Britain in WWI. With a population of 18% Muslim Turks, Turkey sought to annex the island, while the Greeks on the island wanted to declare it a sovereign nation. Violence finally struck on this date in 1963, when Greeks attacked the Muslim enclaves in what the Turks call “Bloody Christmas” ultimately resulting in the displacement of 25,000–30,000 Turkish Cypriots and destruction of more than 100 villages.

1995 – Israel, as part of the 1995 Israeli-Palestinian Interim Agreement, turns the city of Bethlehem, home to the 6th century Church of the Nativity, the medieval St. Catherine’s Basilica, the Milk Grotto, Shepherd’s Fields, and the tomb of Ruth, over to Palestinian control

1603 – Roger Williams, a Puritan minister who was expelled in 1636 from Massachusetts Bay Colony for spreading “new and dangerous ideas” including religious freedom and complete separation of Church and State. Williams took shelter with the Indians until moving to land he purchased from the Indians outside of the Massachusetts Bay Land Grant. He called his new settlement “Providence” and it eventually became the capital of a new colony, Rhode Island. Williams, who would eventually become a governor of the colony, insisted on fair dealings with American Indians, and he was one of the first abolitionists, organizing the first attempt to prohibit slavery in any of the American colonies

1795 – Jack Russell, an Anglican priest known locally as “The Sporting Parson.” His favorite pastime was fox-hunting and he developed the Jack Russell Terrier, a variety of the Fox Terrier breed.

1804 – Benjamin Disraeli, an author, politician, and the only Prime Minister in U.K.’s history of Jewish birth. He is credited as the founder of the modern Tory Party. 1375 – Giovanni Boccaccio, Italian author most famous for his rather bawdy collection of 100 novellas, published as The Decamaron, written against the backdrop of the plague years in Europe.

1937 – Frank B. Kellogg, American lawyer and politician, 45th United States Secretary of State. He is most famous for pushing through the Kellogg-Briand pact, the when progressive naivite undergirding their embrace of “international law” reached its zenith. The Kellogg-Briand Pact, signed by, among others, Hitler’s Germany and Stalin’s Russia, outlawed war. And of course, Kellogg won the Nobel Peace Prize for that.

1940 – F. Scott Fitzgerald, author of novels and short stories, he is most famous for his novel set in the Roaring 20’s, The Great Gatsby.

1945 – George S. Patton, the man who created America’s armor corps and who was, in WWII, America’s greatest tactician and strategist. He died not long after the war ended of complications sustained in a jeep accident.

Ding Dong Merrily on High is a Christmas Carol that started out as a secular dance tune when it was composed in the 16th century. Christmas lyrics were added in the 20th century.

Its the most wonderful time of the year is a Christmas song written in 1963 and released that year by Andy Williams in his Christmas album.

And for extended listening today, there is a Country Christmas