The Battle of Trenton saves the Revolution, The 2nd Day of Christmas, the Feast of St. Stephen, the Soviet Union dissolves, Boxing Day, the Beetles, the 2004 Tsunami, and more. . .

Today is the Second Day of the Twelve Days of Christmas

The Feast of St. Stephen, The First Martyr of the Church

Stephen was one of several people whom Peter and the apostles appointed as Deacons of the Church. Stephen was an effective proselytizer who drew the ire of the Sanhedrin, before whom Stephen was falsely charged with blasphemy against Moses and God (See Acts 6 and 7). His bold declaration not merely his belief in Christ but about a vision that he had of Christ at the right hand of God did not convince the Sanhedrin. In 34 A.D., they voted to execute him by stoning. St. Stephen’s execution was itself notable in that Saul (later, “Paul of Tarsus” after his conversion) took part in the stoning.

St. Stephen is the patron of stone masons, those with headaches, and horses. “The reason for this last is unknown, but this patronage is very ancient, and in rural cultures and olden times, horses are/were blessed, adorned, and taken out sleighing, and foods for horses were blessed to be fed to them in times of sickness.” The Feast of St. Stephen was historically offered in honor of all Deacons of the Church

The Christmas carol Good King Wenceslas tells the legend of how King, later Saint, Wenceslas of Bohemia (907 – 935 A.D.) left his castle on the Feast of Stephen and went through the bitter cold to give alms to a poor peasant. The lyrics are from the 19th century, though the melody is six centuries older.

Today is Boxing Day in Britain and many of the nations that were once part of the British empire.

It became customary in medieval England that the priests would empty the alms boxes in all churches on the day after Christmas and distribute the gifts to the poor of the parish.

The Oxford English Dictionary gives the earliest attestations from Britain in the 1830s, defining [Boxing Day] as “the first weekday after Christmas day, observed as a holiday on which postmen, errand boys, and servants of various kinds expect to receive a Christmas box.”

The term “Christmas box” dates back to the 17th century, and among other things meant:

A present or gratuity given at Christmas: in Great Britain, usually confined to gratuities given to those who are supposed to have a vague claim upon the donor for services rendered to him as one of the general public by whom they are employed and paid, or as a customer of their legal employer; the undefined theory being that as they have done offices for this person, for which he has not directly paid them, some direct acknowledgment is becoming at Christmas.

It is impossible to overstate the importance of the Continental Army’s stunning victory this day at the Battle of Trenton. With that battle, George Washington and his cold, bedraggled soldiers saved the American Revolution from certain defeat.

The British Army under Gen. Howe had spent the last five months thoroughly beating the Continental Army in one battle after another. None were decisive, but the cumulative effect was devastating.

In July 1776, Gen. Washington had commanded 23,000 soldiers arrayed in defense of New York. Six months later, by December 1, 1776, and after Howe had begun his offensive operations, Washington’s army was reduced to only a few thousand men and they were dispirited, under-equipped, and in full retreat through New Jersey. Moreover, the majority of Washington’s soldiers were on one year enlistments and most of them would soon be leaving the service on January 1. Prospects for raising new units were dismal at best.

There were few in America or Britain who thought anything other than that the turn of the New Year would mark the effective end of the Revolution. Even Washington, whose persistence in the face of hardship was near inhuman, could see the reality of his situation. In December, he had written to his cousin in Virginia, “I think the game is pretty near up.” But Washington was determined not to go down without one last great gamble.

Washington hatched an incredibly aggressive plan. His forces would cross the Delaware River on Christmas Night. They would march the ten miles to Trenton, then execute a night attack on the town shortly before dawn.

On a bitter cold night Christmas night, Washington marched his soldiers to McConkey’s Ferry, ten miles north of Trenton. Washington put Col. John Glover and his men of the Marblehead Regiment, all of whom were experienced seamen, in charge of the river crossing. They managed to get everyone across the river, including horses and artillery pieces. Two soldiers died of hypothermia during this phase of the operation.

The march took longer than expected and the units were not in position to launch the attack until long after dawn, at 8 a.m. on December 26. While the Hessians had small guard units a mile outside of town, the main body of the Hessians did not react quickly when Washington’s forces began their attack. Consequently, the Hessians were caught largely unawares as Washington’s army advanced into the town from two directions. Hessians poured into the streets only to be devastated by musket fire, cannon fire, and the bayonet. The commander, Col. Raal, tried to organize a defense but was mortally wounded.

The entire battle was over in less than an hour. The feared Hessian Regiment was no more. The Hessian forces lost 22 killed in action, 83 wounded, and 896 captured, including the wounded. The Americans lost no men (other than those who died of hypothermia) and suffered only five wounded.

And for his part, Washington was not yet done in those bitterly cold days of winter. But more on that on the day they occur over the next several posts.

There are two very good books on the Battle of Trenton. David McCullough discusses the battle within the larger context of the events of 1776 in his best selling book, 1776. Another good book, this one concentrating solely on the Battle of Trenton, is David Hackett Fisher’s Washington’s Crossing. There is also a movie, The Crossing, that A&E in 2000 that is quite good and largely historically accurate.

It is not often in history that a major empire dissolves peacefully and internally on an identifiable day. But for all the blood that was shed in the 70 year formation and life of the Soviet Union, it’s ending was the peaceful opposite.

In the end, Karl Marx’s communist nirvana proved to be nothing more than an Orwellian police state sitting atop a socialist economy that could not compete economically with the West. One would have thought that the Soviet example would have been the end of communism and the entirety of Marx’s bloody fantasies. Unfortunately, Marxist theory is alive and well in the ivory towers of the West and underlies the global warming movement, rising in support every day that the world moves farther from -– and forgets –- the Soviet example.

1790 – Socialism’s war on Christianity began at socialism’s birth in the French Revolution. On this day, King Louis XVI of France, trying to save his monarchy, assented to the Civil Constitution of the Clergy, subordinating the Catholic Church to the revolutionary government.

1799 – Henry “Light-Horse Harry” Lee III of Revolutionary War fame, who had commanded units under General Washington’s command, appeared before Congress and stated, in his eulogy for the recently deceased Washington, that Washington was “first in war, first in peace and first in the hearts of his countrymen.”

1898 – Pierre and Marie Curie announce the isolation of radium. Pierre died in an accident in 1906, while Marie died in 1936 due to complications from radiation poisoning.

1919 – In one of the most bone-headed moves of all time, the Boston Red Sox trade the soon-to-be legendary player, Babe Ruth, to the New York Yankees. The ramifications were cosmic. The gods of baseball, on this day, cast the Curse of the Bambino on the Red Sox. They would never win a world series title during the 20th century.

1941 – U.S. President Franklin D. Roosevelt signs a bill establishing the fourth Thursday in November as Thanksgiving Day in the United States. Roosevelt was convinced to do so by Fred Lazarus, Jr., founder of the Federated Department Stores (later Macy’s), who wanted to expand the Christmas shopping season.

1944 – During the Battle of the Bulge, the largest and bloodiest single battle fought by the United States in World War II , George S. Patton’s Third Army breaks the encirclement of surrounded U.S. forces at Bastogne, Belgium.

1963 – The Beatles’ “I Want to Hold Your Hand” and “I Saw Her Standing There” are released in the United States, marking the beginning of Beatlemania on an international level. The British Invasion had begun.

2004 – The Indian Ocean earthquake shakes northern Sumatra with a maximum Mercalli intensity of IX (Violent). One of the largest observed tsunamis follows, affecting the coastal areas of Thailand, India, Sri Lanka, the Maldives, Malaysia, Myanmar, Bangladesh, and Indonesia; death toll is estimated at 227,898.

I won’t post the raw footage of the incident out of respect for the people shown in the video who lost their lives, but if you wish to view it, go here. If nothing else, it is an abject warning that, if the tide goes out suddenly and unexpectedly, prudence dictates that it is time to get to higher ground rather than sit on the beach, wondering where the ocean went. 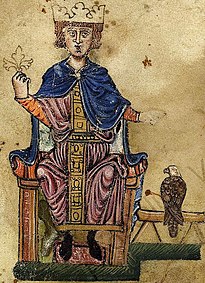 1194 – Frederick II, last in the early line of notable Holy Roman Emperors. He was an ambitious, expansionist and brilliant ruler who created the model for modern bureaucracy. He was also the first ruler to outlaw trial by ordeal. He was frequently at war with the Papacy who excommunicated him four times. Pope Gregory IX went so far as to call him the Antichrist.

1526 – Rose Lok, a businesswoman and Protestant exile who wrote a partial autobiography of her life during the tumultuous period of Henry VIII and then Queen Mary.

268 – Pope Dionysius, who led the Church in the period after the Valerian Persecution, during the 40-year “Little Peace of the Church.” During his papacy, Dionysisus “reorganized the Roman church, which had fallen into great disorder” and the Church flourished.

831 – Euthymius of Sardis, a Byzantine bishop and saint who was whipped to the death on this date upon order of the Byzantine Emperor for defending the veneration of holy Icons.

1972 – Harry S. Truman, one of the most consequential of U.S. Presidents. Taking over the Presidency after the death of FDR, Truman ordered the use of the atomic bombs on Japan, supported the creation of Israel, integrated the U.S. military, and defended Korea from communist aggression.