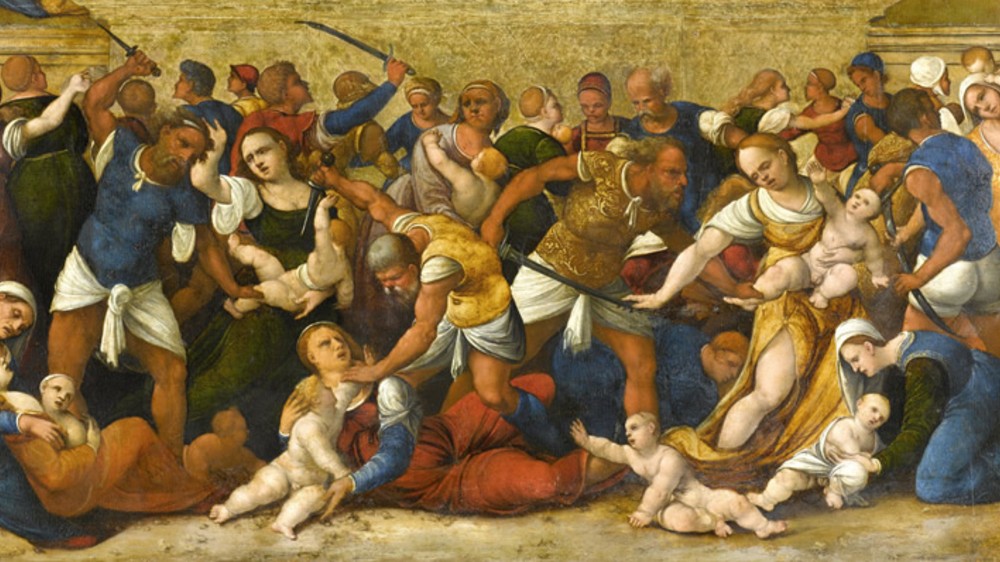 Today is the 4th Day of Christmas

Feast of the Holy Innocents

The story of the massacre of the innocents is told in the Gospels at Matthew 2:16-18. Herod the Great, the Governor of Galilee, was a Jew with a reputation for ruthlessness and cruelty, known for killing anyone, including his wives and sons, whom he believed threatened his hold on power.

After the birth of Jesus, the Magi came to Jerusalem, asking where the newly born King of the Jews might be found. When Herod heard about this, he asked the Magi, should they find the infant, to tell him so that he too might pay a visit to honor the child. The Church celebrates the day that the Magi found Jesus as the Epiphany. But the Magi, warned in a dream about Herod’s heart, did not return to Herod.

After the Epiphany, an angel visited Joseph in a dream and warned him that Herod was dangerous. Joseph gathered Jesus and Mary and the three escaped into Egpyt. Meanwhile, Herod, enraged at the Wise Men’s “betrayal,” had all of the infant boys in Bethlehem slaughtered.

The fourth day of Christmas commemorates these baby boys. These Holy Innocents are considered martyrs who died not only for Christ, but in His place.

The Coventry Carol is a particularly poignant song written as a lullaby being sung by a Bethlehem mother to her doomed infant son. It was written in the 14th or 15th century and sung in the Pageant of the Shearmen and Tailors, a nativity play repeated annually in Coventry, England.

One of the Soviet Union’s means of controlling its population was to deport entire nationalities out of their homelands to work in gulags in Siberia. Ethnic Russians were then resettled in the areas vacated. Stalin, at various times, gave orders to deport the Volga Germans, the Chechens, the Ingush, the Balkars, the Karachays, the Crimean Tatars, the Meskhetian Turks and, on this date in 1943, the Kalmyks.

The Kalmyks were a Mongol race that had migrated in the early 17th century to the shores of the Volga River. During WWII, the population was split in their support of the Soviet Union and Nazi Germany. After Russia captured the area of their settlements in 1943, both because of their support for Germany and their Buddhist religion, Stalin ordered that the Kalmyks be rounded up and deported into work camps in Siberia. Soviet soldiers began the process on this day.

. . . NKVD agents entered the homes of the Kalmyks and announced the Decree of the Presidium of the Supreme Soviet, requiring the immediate deportation of Kalmyks to Siberia. . . . The Kalmyks were given 12 hours to pack their belongings. They were allowed to carry up to 500 kilograms (1,100 lb) of property per family, and multiple families had to share space in one truck. Soviet soldiers searched the Kalmyk houses and confiscated firearms, anti-Soviet literature, and foreign currency. Every person of Kalmyk ethnicity, including women, children and the elderly, were loaded onto trucks and sent to nearby railway stations. . . Soviet forces surrounded Kalmyk settlements from the outset to prevent any potential resistance.

The deportation contributed to more than 16,000 deaths, resulting in a 17% mortality rate for the deported population. The Kalmyks were rehabilitated in 1956 . . . By 1959, more than 60% of the remaining Kalmyks had returned home. The loss of life and socioeconomic upheaval of the deportations, however, had a profound impact on the Kalmyks that is still felt today.

The game that made football America’s favorite national sport (and turned Baltimore into a town of rabid football fanatics) was the 1958 Championship Game played between the Baltimore Colts and the New York Giants, the “Greatest Game Ever Played,” that ended in sudden death overtime.

It was a different world back then. The players were upper middle class blue collar workers who spent their lives in the community. Some of my earliest pictures as a kid are of being held up by Johnny Unitas, Artie Donovan and Gino Marchetti. Baltimore loved the Colts, and the Colts were woven into the fabric of the city. A bit more about them below:

1836 – Napoleon’s 1808 invasion of Spain and his deposing of the Spanish monarchs reverberated in Mexico, soon leading to Mexico’s first civil war. Spanish rule in Mexico was effectively overthrown by 1821, but it would be another fifteen years before Spain would acknowledge it by treaty. On this date, Spain recognized the independence of Mexico in the the Santa María–Calatrava Treaty.

1973 – The United States Endangered Species Act is signed into law by Pres. Richard Nixon. While it has done some good, it gave radicals the keys to the courthouse and has become one of the many laws abused by radical environmentalists over the years. Just ask California farmers.

1722 – Eliza Lucas, one of the most fascinating figures of the colonial era. Growing up near Charleston, SC, she was running three plantations by the age of 16. She later was significantly responsible for the development of the indigo industry in colonial SC that became one of the colony’s major cash crops. Of her children, one of her sons was a signatory to the Declaration of Independence and two of them were candidates for the Presidency. She left behind a wealth of letters that give insight into life in colonial South Carolina.

1856 – Woodrow Wilson, 28th President of the United States, a deeply racist man and the father of the progressive movement in America. Between his embraces of regulatory bureaucracy and the living constitution theory, we are still very much living with the evils of his administration.

1694 – Mary II, daughter of King James II of England and wife to Prince William of Orange. She and her husband were seated as monarchs of England in 1689, deposing her father in the Glorious Revolution.

1734 – Rob Roy MacGregor, a Scottish outlaw who became a legend in his own time. A fictionalized account of his escapades was made into a popular movie, Rob Roy, in 1995 starring Liam Neeson.

Header image: Detail from Massacre of the Innocents by Lodovico Mazzolin