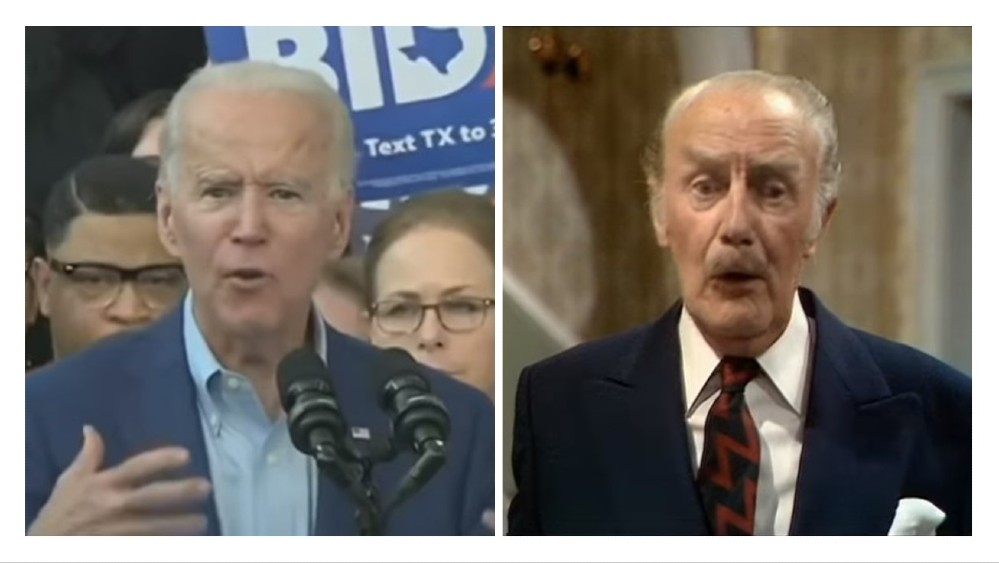 BBC’s attempt to cancel Fawlty Towers’ funniest episode may have been the worst “cancel culture” decision ever because it could (and should) hurt Joe Biden.

The big non-Wuhan Virus, non-protest kerfuffle over the past few days was the decision that UKTV, a BBC-owned television network, make to delete the funniest Fawlty  Towers episode ever, the one called “The Germans.” For those unfamiliar with either the show or the episode, here’s the briefest rundown possible.

Fawlty Towers ran on the BBC in 1975 and 1979. John Cleese played Basil Fawlty who, with his wife Prunella, ran a hotel on Britain’s southwest coast. Basil is a combination of incompetence, pomposity, ignorance, condescension, and inferiority, all of which are powered by his endless rage.

The hotel also employed Polly, a sensible housekeeper, and Manuel, a sweet, hapless dogsbody from Spain who never mastered English. There were a few permanent guests, one of whom was Major Gowen, a doddering, senile, racist remnant of Britain’s lost empire.

In the episode “The Germans,” filmed in 1975, thirty years after WWII ended, Basil is overwhelmed by the fact that German guests will be coming to his hotel. He’s desperate to ensure that no one makes them feel uncomfortable, so his oft-repeated warning is “Don’t mention the war.” That all changes when a moose head falls on Basil. Rather than staying in the hospital, Basil staggers back to the hotel’s restaurant, where he relentlessly and hysterically keeps mentioning the war to the Germans. It is one of the funniest moments ever put on television:

The above scene, though, was not what triggered the censors at the BBC. Instead, what got the censors going was when Major Gowen, a dotty old relic, made racist comments:

When John Cleese heard about UKTV’s move, he immediately pointed out the central problem with the BBC’s censorship (emphasis mine):

“The Major was an old fossil left over from decades before. We were not supporting his views, we were making fun of them,” said Cleese, who knew nothing of UKTV’s move until this masthead contacted him. “If they can’t see that, if people are too stupid to see that, what can one say?

The BBC/UKTV responded to public outrage by reinstating the censored episode. The important lesson here is that the normals can push back against cancel culture.

Still, while the kerfuffle was hanging out there, it occurred to me that the BBC and UKTV did a terrible thing to Joe Biden when they pushed Major Gowen to the forefront of everyone’s mind just months before the November election. Think about Major Gowen. Look at his racist comments in the above clip. Then compare them to America’s real-life Major Gowen (and the Democrat party candidate):

It’s not just the racism, though. It’s also the . . . is dodderingness a world? If not, it should be. Here you can see Major Gowen stutter and dodder his way through the show:

Those moments too should remind you of someone:

Below is a rundown of a few of Biden’s most recent meltdowns that raise TONS of questions.

Biden butchered the Declaration of Independence: “We hold these truths to be self-evident. All men and women created by the you know, you know the thing.” pic.twitter.com/A0MRpMmIWk

1. President Trump went to Texas yesterday, not June 19
2. Juneteenth is about emancipation
3. The massacre was in Oklahomapic.twitter.com/lfY03BB6xS

Joe Biden doesn’t know what state he is in.

There are so many instances of Biden not knowing where he is, it’s SHOCKING.pic.twitter.com/3DjOYuHfSx

Joe Biden doesn’t know what office he is running for: “My name’s Joe Biden, I’m a Democratic candidate for the United States Senate.”pic.twitter.com/vZGbqxKKlY

The reality is that Biden and the Major are one and the same. If you’re a fan of really bad puns, you could say that, while Biden has always been a dimwit, in old age he has morphed into a Major dimwit. The BBC and UKTV were doing racial virtue signaling when they pulled the best Fawlty Towers episode ever, but what they really did was remind me (and, I hope, others) that Joe Biden is the living incarnation of one of the most stupid, senile, racist characters ever immortalized on film. And while he’s funny in an old TV show, the thought of Major Gowen as President of the United States should put the fear of God in everyone.