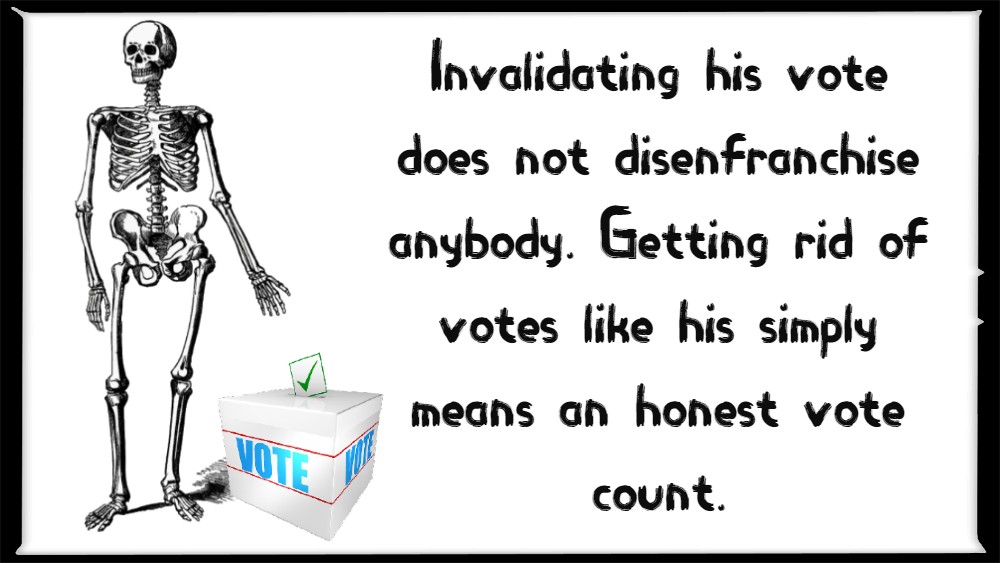 I am stuck on a very important point, and I’m hoping to change how people think about it. The left, NeverTrumpers, and RINOS keep saying that, when Trump and his supporters allege election fraud — claims based on an increasingly high mountain of evidence — they are “disenfranchising” Biden voters. And, of course, “disenfranchising” voters is evil. Here are just a few examples:

The judge called the lawsuit a request to “disenfranchise the votes of more than 5.5 million Michigan citizens who, with dignity, hope, and a promise of a voice, participated in the 2020 general election.” Mr. Biden defeated the president in Michigan by 154,188 votes or 2.8 percentage points. (Emphasis mine.)

U.S. District Court Judge Matthew W. Brann, who heard Giuliani’s argument on the case earlier this week, said the court “has been presented with strained legal arguments without merit and speculative accusations” that weren’t tied to the actual complaint nor supported by evidence.

“In the United States of America, this cannot justify the disenfranchisement of a single voter, let alone all the voters of its sixth-most-populated state. Our people, laws and institutions demand more,” Brann wrote. (Emphasis mine.)

Brann, incidentally, did not consider the evidence presented. He just didn’t like the arguments.

[T]he president’s campaign now finds itself on the other side of a legal case in a newly filed federal lawsuit alleging that it violated the Voting Rights Act of 1965 when it sought to “disenfranchise hundreds of thousands of voters,” particularly African Americans in metropolitan areas of Michigan.

“It’s not even about the success of President Trump and the Trump campaign’s attempts to overturn the election,” Monique Lin-Luse, assistant counsel of the NAACP Legal Defense and Education Fund, which filed the lawsuit, told Yahoo News. “The very attempt … to overturn it by disenfranchising and de-legitimizing Black voters is what we believe is unlawful, and it’s also dangerous and corrosive to our democracy.” [Emphasis mine.]

You can find an endless number of other accusations from Biden supporters both inside and outside of courthouses. They all boil down to the same thing: It’s improper to claim that fraud was the means by which Biden achieved a greater vote count than Trump. Even trying to prove fraud “disenfranchises” those who now celebrate Biden’s victory. At this point, if “president-elect” Biden doesn’t get sworn in, a great wrong will have been done to his voters.

Hogwash. The above is a completely fallacious argument and needs to be challenged wherever it appears.

According to the dictionary, to disenfranchise someone means to deprive him of his right to vote.  Right off the bat, that did not happen in this election. No one was deprived of their right to vote. Both true Biden supporters, as well as tens of millions of Trump supporters, voted. The problem here is that Biden got votes that had no “right to vote” behind them. Instead, Trump claims that Biden’s “winning votes” came from dead people, imaginary people, illegal aliens, people voting multiple times, and computer bytes, none of which should have been included in the final count.

Properly understood, the correct term for what Biden-friendly judges, media outlets, and activists are claiming is that Trump’s fraud claims are attempting to “invalidate” the votes that true (living, legal) Biden supporters cast. And properly understood, all these people are wrong, dead wrong.

Here’s what Trump’s fraud claims will do: They will invalidate fraudulent votes, which is right and proper. That’s the whole point behind the Trump team’s careful statement that they seek to count “every legal vote.” When every legal vote gets counted, those who support Trump are 100% certain that Trump will prove to have more legal votes than Biden.

Correctly phrased, it’s clear that nothing Trump is doing seeks to — or can — “disenfranchise” Biden voters. Real, living, legal Biden voters were freely able to cast their votes. They fully exercised their franchise. Moreover, when the vote tallies are shorn of fraudulent votes, all of these legal Biden votes will still be counted — and Biden will lose.

That outcome is neither disenfranchisement nor is it a case of votes being “invalidated.” Instead, it’s how an ordinary election works. The side with more legal votes wins.

Think about it this way. If we apply the Democrats’ Orwellian definition of “disenfranchise,” that means that, in every American election since 1792, the losing party was disenfranchised. To state the principle is to realize how nonsensical it is.

So let’s figure out who the real victims are here, and it’s not Biden voters who will be “disenfranchised” if courts so much as consider fraud. The real victims are Trump voters, all of whose votes will have been invalidated if Biden is handed victory based upon a fraudulent vote count.

Exploring the fraud claims will ensure that no one’s votes are improperly invalidated. Instead, every real vote gets counted, fake votes are properly ignored, and the true winner has an unblemished, unquestioned victory. If Biden loses under this tally, there is no disenfranchisement. There is just an ordinary election.

Doing anything else — refusing to explore whether there was fraud or, worse, turning a blind eye to fraud — is a crime against Trump supporters and the American election system. If it stands, Biden is a pretender and American elections are shams just as surely as they are and always have been in communist countries, from the former Soviet Union, to China, to North Korea, to Venezuela.

I sure hope someone makes this clear to the justices on the Supreme Court. I’m worried that they’ll be scared off by some variation of the word “disenfranchise” (i.e., disenfranchisement, disenfranchised, disenfranchised), with all of its intended Civil Rights/Jim Crow connotations. They need to be very clear that invalidating illegal votes simply clarifies who is the real winner and the real loser in an American election.