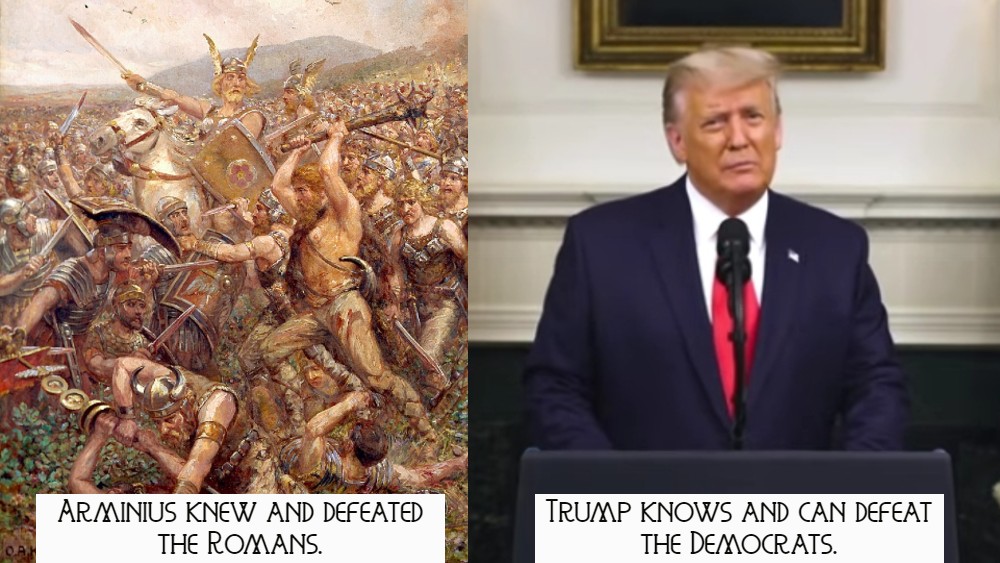 People have worried that Trump’s Democrat past taints him but the Battle of Battle of Teutoburg Forest predicts that it made him stronger.

I keep thinking of the Battle of Teutoburg Forest, in 9 A.D. It’s the reason the Romans lost their hold on Germania and were never again able to expand very far into the territory of the German tribes.

Arminius was a German prince whose tribe the Romans had conquered. The Romans took him away as a hostage so his father wouldn’t wage war. Arminius was accorded respect in Rome and trained in Roman fighting, eventually attaining the rank of equestrian.

Eventually, the Romans sent Arminius back to “Germania” as part of the Roman mission to conquer the German tribes. However, while there, Arminius plotted a return to his people and a revolt against the Romans.

When the Romans attacked, the Germans under Arminius’s command, rather than fighting wildly, as the tribes always did, fought in disciplined Roman fashion and completely defeated three Roman legions. Arminius managed to fend the Romans off for another 12 years before jealous Germanic nobles assassinated him.

After WWII, Germans were no longer allowed to learn about Arminius (whose name is the German “Hermann”) lest they once again get too big for their lederhosen.

So why am I thinking of Arminius?

Now Trump, like Arminius, is leading a revolt against a ruling class he knows intimately. As we get ever closer to January 6 and January 21, it gives me hope that Trump can be the new Arminius, using his inside knowledge of the Democrats to defeat them. And because we don’t live in the assassination made first few centuries of the “anno domini” era, I fully expect Trump to have a much better ultimate ending than poor Arminius did.