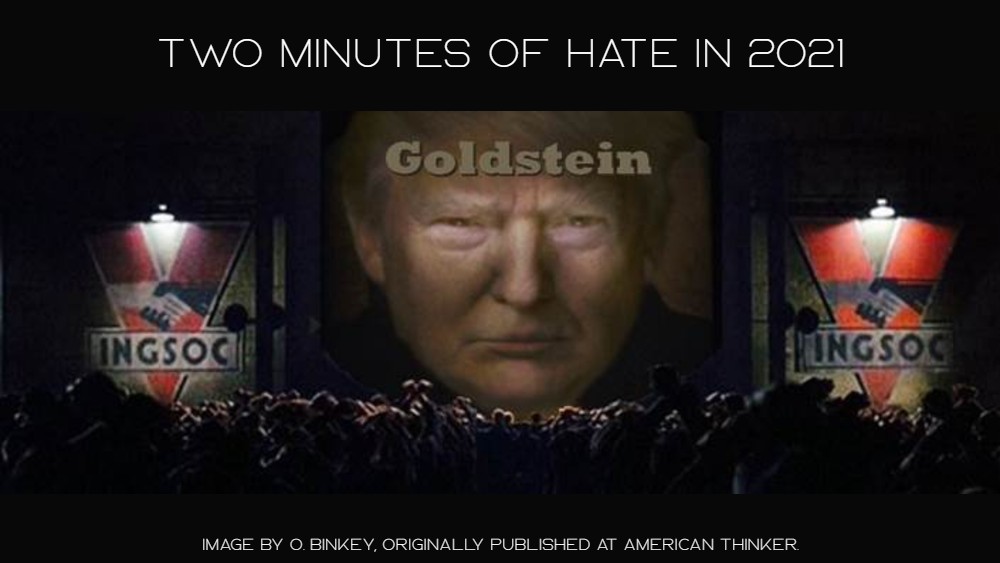 The Dems’ attempts for 4 years to analogize Trump’s administration to 1984 fell flat. It’s a different story with the Biden administration.

During Trump’s presidency, Democrats kept likening his style to 1984. They did so either because they hadn’t read 1984 or did not understand it. 1984 is about total government control in a technological world. This allows a massive government to spy on people and control everything they say, do, see, or hear. When people challenge this government totalitarianism, they are “re-educated” or deleted.

Endless war is a necessity in 1984’s Oceania because it forces people to believe that total government is necessary to protect them from an unseen enemy. And of course, language is not a tool for communication; it’s a means of controlling thought.

Trump was the antithesis of 1984. He spent four years trying to shrink the government. He made no effort whatsoever to spy on people or to control anything they said, did, saw, or heard. When people challenged him, he fought back on substance and, often, called them silly nicknames. Trump pulled America out of existing wars and did not start any new ones. And of course, while his language was blunt to a fault, Trump was never the speech police, constantly changing what words one must use, and what perfectly good words (at least, as of yesterday) that they abandon if they wish to avoid being de-personed.

Trump was not Orwellian. He was not even Wilsonian, as in Woodrow Wilson, the first Progressive president, who tried to impose a police state on America during WWI. Trump greatly expanded American liberty and the Democrats hated him for it.

Kevin Dzuban is a very talented artist, and he gave me permission to publish a graphic he made comparing the nascent Biden administration to Orwell’s fictional world. Unlike the forced Obama comparison, the connection between our new Democrat rule (with total oligarch backing) and 1984’s Oceania, is direct, compelling, and frightening: