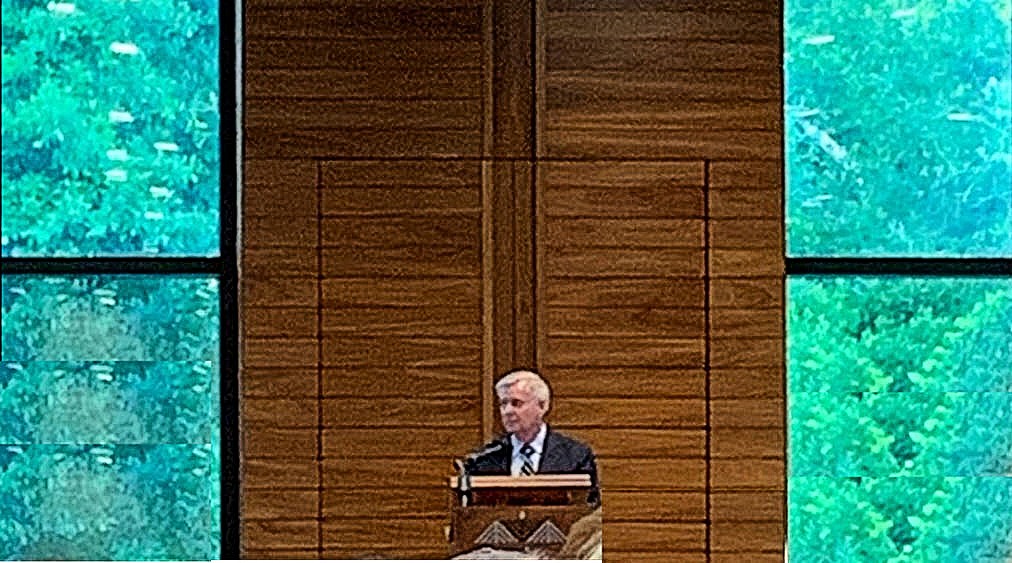 Lindsey Graham strongly supports Israel and is proud to say it out loud. Kudos to him for doing so!

On Wednesday, I had the opportunity to hear Sen. Lindsey Graham when he spoke to a packed auditorium at the beautiful Chabad of Charleston, South Carolina. It was refreshing to hear his full-throated support for Israel as an American ally and as a free country surrounded by totalitarian enemies.

Although Graham was speaking in a Jewish center, based upon the conversations I had with the people near me, as well as a visual survey of the room, the 200 or so people who attended on very short notice were from very mixed backgrounds: There were American Jews, Israelis, and Christians. Although the Christians were mostly white, there were a few blacks sprinkled among them. The audience skewed older but, at a guess, about 25% of the people who attended were under 40. The only ones wearing masks were the very old and those who looked as if they had health problems.

(Speaking of visual surveys, by the way, I was seated very far back, which is why the photo at the top of this post is so poor. I also did some very primitive photo editing to get rid of the sea of heads between my camera and Sen. Graham.)

Graham is a polished and charming speaker. He cracks good jokes (they’re funny and appropriate) and, even though you know he’s told them many times before, he has the professional comedian’s ability to keep them fresh. Graham also knows when to be serious and when not to be.

Graham is not a fire and brimstone kind of guy. He’s soft and tactful. One person’s questions encouraged him to speak about Joe Biden’s role in the violence playing out in the Middle East but he politely refused to do so. That could have been Lindsey Graham 1.0 in action (too committed to collegiality and partisanship to realize that the Democrats have jettisoned both ideas), but mostly his speech was strong and unequivocal – that is, Lindsey Graham 2.0 stuff. The impression I had was that he feels it’s not in Israel’s best interests for him to alienate Biden.

The talk, at 28 minutes, was mercifully short for a politician. There was a bit of repetition because Graham really likes the fact that Israel allows all faiths to worship within its borders and is proud of having traveled there several times. Still, he seemed to be speaking extemporaneously (I was too far away to see if he had notes), so the repetition felt natural and conversational.

That’s the mise en scène. Now to the meat of what he said, all of which was interrupted periodically by loud applause.

Just to give an idea of his gift for connecting with the audience, Graham, after thanking the Chabad house for hosting him, said, “On a Wednesday night in South Carolina, there are Baptist churches not nearly this full praying for Israel tonight – and you drew this crowd without food.” It was a good laugh line and encompassed everyone in the audience, Christian and Jewish alike.

Graham explained that, even though the Senate is still in session, this topic was important enough for him to make the trip to Mt. Pleasant. Right out of the box, he said, “As to more money for Israel, the answer is yes.”

He characterized Israel as one of the good guys. Why? Because good guy countries “believe in religious tolerance. So, I’ve been to Israel many times. As a Christian I can go anywhere I want to go…and I feel welcome and I can practice my faith without fear. That’s what the Jewish state provides people of other faiths.”

As far as Graham is concerned, America should stand with Israel, “Because, if you believe in democracy, you should be standing with Israel tonight. If you like democracy, Israel’s the place to go. They have an election every two months.” (Good laugh line.)

Graham explained that he’s told Israeli politicians that he’s got their back. “It’s up to you to find out what kind of government you want. But it’s up to people like me and the folks in South Carolina, to give you the space to practice your democracy the way that you choose and, more than anything else, to live.”

One of the important things Graham did was focus on the moral difference between Israel and Hamas. “I believe that Hamas is an organization, if they could, would wipe Israel off the face of the planet – and one Holocaust is enough.” He does not want to see happen now what happened more than 76 years ago, when the Jewish people were almost annihilated because “the world ignored the threat until it was almost too late.”

Graham added that Israel means it when it says, “Never again.” In a nice pairing of images, he said that “The Warsaw uprising runs through the veins of every Israeli I’ve ever met. The spirit of Masada is in the DNA of the IDF.”

Standing with Israel isn’t just the moral thing to do. It’s pragmatically smart. Graham also made the important point that the benefits from the American-Israeli friendship go both ways. “There is no better friend to the United States when it comes to intelligence sharing than the State of Israel. And they never ask for one American soldier to drop one ounce of blood. All they ask for is the ability to defend themselves.”

Indeed, he added, “the biggest beneficiary of the state of Israel in terms of the ability to defend themselves has been the U.S. military because they share their technology with us. If somebody’s trying to kill you every day, you get really good at defending yourself.”

Switching tracks, Graham assured the audience that, while they “have a lot to worry about but you don’t have to worry about the two Senators from South Carolina.” He also reminded everyone in the room that, in America, the biggest support for Israel comes from Evangelical Christians — and South Carolina has a lot of those.

Next came another statement about supporting Israel:

We do not accept the proposition that Israel is the bad guy. We reject the moral equivalency being pushed between Hamas and the stae of Israel. We pledge our undying faithful support to the people of Isral and what they need that we can provide will be forthcoming. We will fight any effort to block aide. I will seek out Democrats to find common ground. I will oppose Republicans who are not right. I have never been more worried about American politics than I am right now on this issue.

Graham also pushed back against the theory that Israel is evil because, in the face of thousands of rockets raining down on its country, it does a better job of keeping its citizens alive.

What’s the point? The only reason they’re not thousands of dead Israelis is Israel can defend herself. It’s not because the enemy is not trying to kill people; it’s because the Jewish state will no longer be quietly and compliantly killed. This ‘never again’ thing really has meat on the bones.

Graham wrapped up his address by noting that the real problem here is Iran. The rockets came from Iran, which arms terrorists all over the world. He noted that no one in politics or the media is discussing Iran’s role, adding (to applause), “Don’t you think that should be a discussion? Well, it’s going to start next week.”

In the coming week, he said, he and Sen. Bob Menendez (who has always been a good friend to Israel), will be authoring an opinion piece in which they argue that it’s time to call Iran’s bluff. If all they need is nuclear material for energy, they should willingly sign on to an agreement that all their reactors will go. Instead, there should be an international stockpile of nuclear material solely for reactors without weapons capability.

Overall, it was a good speech but even at 28 minutes, by the end, I was tired and not taking good notes anymore. (As you can see from the way my post peters out.)

My main takeaway is that, in Lindsey Graham, Israel has at least one good friend in Congress who recognizes Israel’s claim to the land, her essential morality, Hamas’s evil, genocidal intentions, and Iran’s puppetmaster role in all of this. Whether that matters in a world in which the Democrats hold most of the levers of power remains to be seen, but I very much admired Graham for making the stand he did.