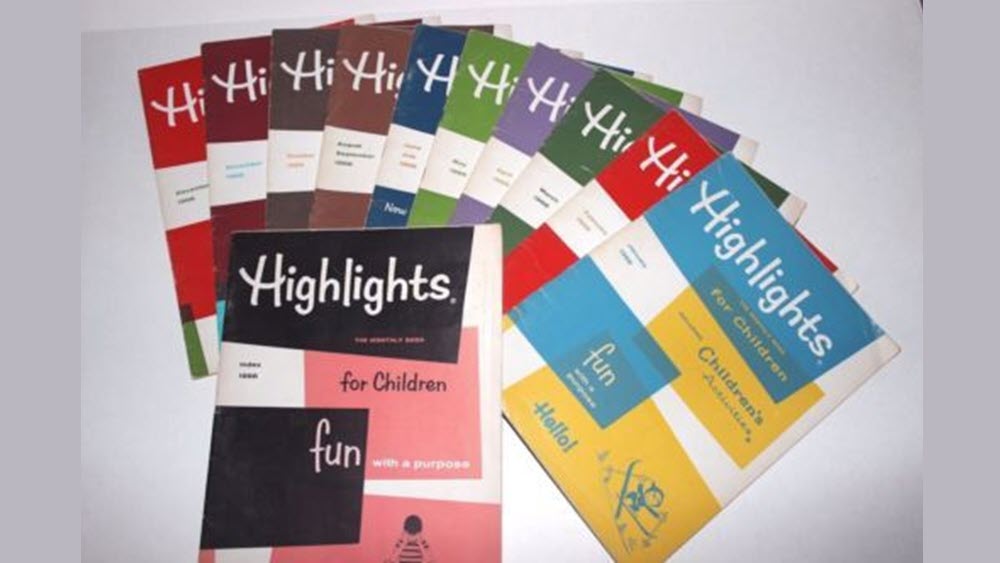 I shouldn’t be surprised that Highlights for Children, a classic children’s magazine, has gone left, but I’m still saddened that it has.

Although my parents never got a subscription for me to the venerable (now-75 years old) Highlights for Children magazine, it was nevertheless a staple of my childhood because my ophthalmologist had it in his waiting room. Because my vision degraded very quickly when I was young, I spent a lot of time in that waiting room and I loved reading those Highlights for Children magazines.

I’d always start with the “find the object” or “hidden pictures” puzzle. These were black and white drawings that had a list of common objects cleverly hidden in the design of the various elements in the picture. I always felt so triumphant as a little girl when I located all the objects.

I also loved “Goofus and Gallant.” Goofus, despite the implication of his name, wasn’t merely foolish. Instead, he was a rude oaf. There was always a panel showing Goofus being unkind, selfish, or ill-mannered. Then, we got to contrast that oafish performance with the gentlemanly Gallant who held open doors for women, gave up his seat on the bus to old men, and generally treated the world around him with respect.

I also vaguely remember a bear family but I may be wrong about that but I definitely remember the Timbertoes family without quite remembering what the point of their cartoons was. The other offerings, I believe, were activities you could do at home, informative articles about how things were made or about how children in other countries lived, and letters from children.

It turns out that my two favorite features — finding objects and “Goofus and Gallant” — still exist, but at least one of them has changed. You see, the magazine has gone woke.

How woke? Well, get a load of this letter to grown-ups on the Highlights blog from the Editor in Chief, Christine French Cully, published this past January. In the first paragraphs, she doesn’t even try to hide her Trump Derangement Syndrome, her wokeism (note the reference to an “insurrection”), and her relief that the Democrats are in charge once more:

I had almost forgotten just how feather-light hope is, and how easy it is to carry. Today I’m full of hope.

After all the uncertainty and sadness wrought by the pandemic, several years of looking down into the deep abyss created by the way we have expressed our political differences, our ongoing fight for social justice, and the insurrection at the U.S. Capitol just a few weeks ago—hope, like a feather fluttering in a battering wind, feels as if it could too easily escape my grasp.

If you have the stomach, watch this short video of children talking to the new administration that Cully included in her blatantly partisan letter:

The first girl is thrilled that the Veep “finally” is a female. Another little girl wants open borders to reunite families, and still another girl celebrates everybody getting vaccinated. We’ve also got wealth redistribution and nude green eel environmentalism, The only one that makes sense is the little boy who says, “I would stop the nonsense.” Unfortunately, given Joe’s swiftly degrading brain, nonsense is all he has left, backed by a solid wall of radical leftists no one, not even Democrats, knew they were voting for.

There are other highly woke videos from Highlights. Thus, in the Highlights for Grown-Ups video section, in addition to videos about fun family crafts and nature activities, you also find the Editor in Chief interviewing Dr. Christine Herring about “Using Books to Help Kids Learn About Social Justice.” Herring is described thusly:

Dr. Herring is a leading expert in the field of Race, Equity & Inclusion training in the Pittsburgh area. Dr. Herring and her husband, Dr. Charles Herring, are the founders of Herring Seminars where they work with organizations and school communities to develop ways of understanding complex relations between self and systems with regard to race, class, gender, sexual orientation, physical ability/disability, and other lived cultural experiences. To help parents, Dr. Herring has graciously compiled this booklist of books with social justice themes.

Another “Highlight for Grown-Ups” offers as an activity for families something called “Practice Peace.” According to the description,

This week, through stories, puzzles, and activities, we are showcasing some of the ideals that Dr. Martin Luther King Jr. stood for, including caring for your community, fighting for equality, and—of course—practicing peace. While talking to your kids about civil rights may feel like a daunting task, there are ways to incorporate Dr. King’s core messages into conversations with kids of any age. Help young children understand that every person should be treated with respect and with kindness, and that to truly know someone, you have to spend time with them and talk to them. For older kids, choose a book about Dr. King’s life and legacy. Discuss how Dr. King helped bring about great progress toward equality, and explain that we still have a long way to go.

Despite our having the most equitable society in the world (outside of Cuba, of course, according to Nikole Hannah-Jones, where everyone is equal — and, although she doesn’t say so, equally and horribly abused), note the line about “we still have a long way to go.” Cuba, here we come.

That’s wokeism from the management end. It means, of course, that the magazine is woke too. (The videos for children do not seem to be woke, although I can’t tell without watching all of them, something I will not do.) Here’s a copy of a recent “find the object” that was included in the latest edition of the Costco magazine. I didn’t bother looking for the bagel, blueberry muffin, chicken bake, choco chunk cookie, a cup of soda, gold star, hot dog, ice-cream cup, a roll of toilet paper, etc. Instead, I’ve made my own list of things to find: 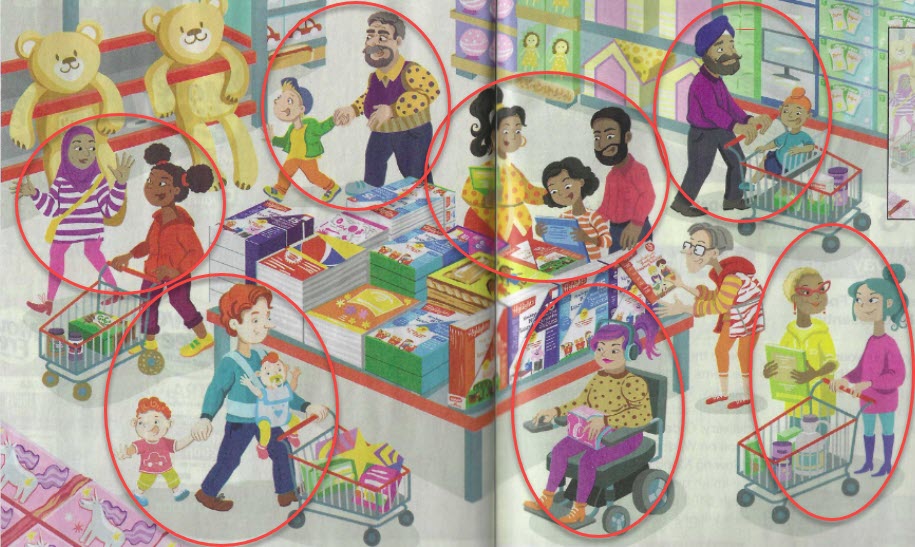 There’s nothing wrong with each of those things taken alone. Indeed, I applaud showing to Black children pictures of intact families because that’s the thing that’s most likely to save Blacks from the Democrats’ tender fascist, racist love. I think it’s great if Muslims can play well with others. Just because the White mommies and daddies don’t have a spouse of the opposite sex in the picture doesn’t mean there isn’t one waiting at home. And Sikhs and handicapped people shouldn’t be ignored. But when you pile all of that into a single picture, you’ve got wokeism on steroids.

As for Goofus and Gallant, I can’t really say what’s going on with the pair of polar opposites. When you look for Goofus and Gallant images on the internet, you mostly find some lovely classics or cartoons that pranksters have altered for fun or politics (none funny, I might add). I’m sure there’s a microaggresion Goofus and Gallant in there somewhere, though. “Goofus asks people where they come from.” “Gallant understands that such questions, rather than showing an interest in people, reveal him as the White Supremacist, toxic male he really is.”

At the beginning of this post, I said that I shouldn’t be surprised by the magazine’s leftward turn. After all, John O’Sullivan’s first law says that “All organizations that are not actually right-wing will over time become left-wing.” (And looking at what Trump Derangement Syndrome did to such venerable sites as National Review, that law could be revised to say that “All organizations that are not deeply committed to conservative principles, not cruises, will become left-wing as time passes.”) Nevertheless, knowing the law in the abstract and seeing its effect on a beloved childhood memory are two very different things.