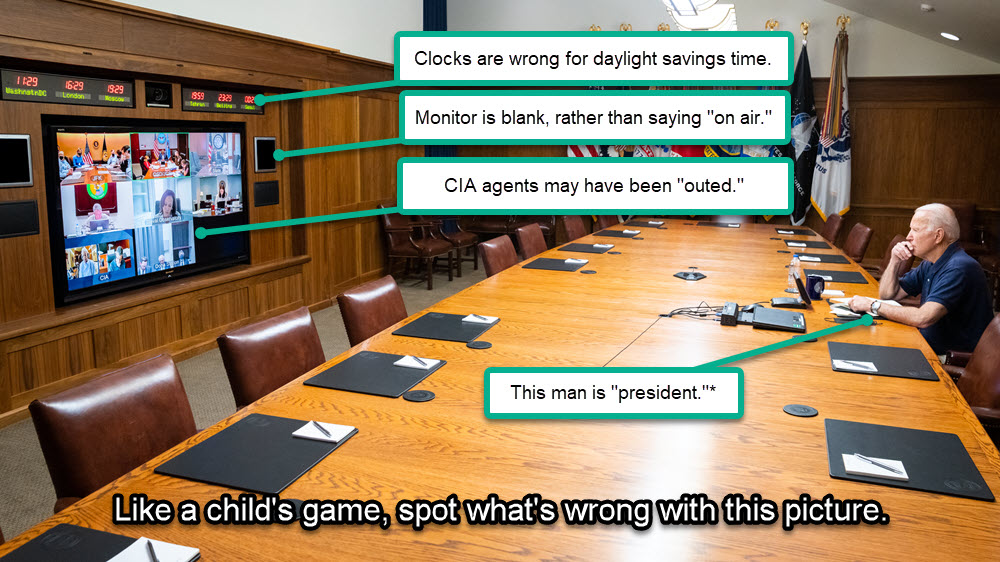 The debacle in Afghanistan makes it impossible to ignore Joe’s malevolent incompetence and reveals who’s paying attention — and who’s not.

There are no words for what’s happening in Afghanistan. We are abandoning a nation to Stone Age tribal warlords who operate under the same rules that have driven Stone Age people since the dawn of time. It was always unrealistic to believe we could take Afghanistan on a journey from Stone Age values to the 21st century by having troops in the country and pouring money into the pockets of insatiably corrupt leaders.

Mark Jarrett very intelligently explains how bad our idea was and, once we were in, what a hash we made of even trying to accomplish the goal of bringing instant Enlightenment to Afghanistan:

The people of Afghanistan had twenty years to experience Afghan government and decide that it was not worth fighting for.  The stories are legion: the first president, Karzai, constantly releasing captured terrorist leaders as he dealt directly with the Taliban.  President Karzai’s brother being the top gangster of Kandahar.  The Afghan Air Force heroin-smuggling ring.  The Thursday Man Love sessions for all the pedophiles of the Afghan police and military.  The “ghost” soldiers and ever-stolen supplies of the Afghan Army.  The massive vote fraud of the Afghan presidential elections.  The Afghan judges who gave no justice without a bribe.  In sum, the Afghan government had the façade of a constitutional system — but inside its halls, it was a collection of thieves and robbers getting as much as could be gotten while the money was flowing.

You can read the rest of Mark’s article here. It’s very worthwhile.

Well, you win some; you lose some. But when you’re the Biden administration, when you lose, you follow the model set in 1975: You intemperately walk away, leaving to the enemy your own people and those of the native country who really were loyal to you. Then, if you’re Joe Biden, you hide, refusing to issue statements or meet the press. Then, you have the White House issue a tweet allegedly showing you meeting with your advisors, only to have sharp-eyed folks notice that (a) the clocks in the photo are wrong because they don’t reflect daylight savings and (b) the “on air” light is off, showing Joe is “talking” to no one but the voices in his head:

This morning, the President and Vice President met with their national security team and senior officials to hear updates on the draw down of our civilian personnel in Afghanistan, evacuations of SIV applicants and other Afghan allies, and the ongoing security situation in Kabul. pic.twitter.com/U7IpK3Hyj8

London and Moscow are currently only two hours apart because of Daylight Savings Time. The clocks in the picture the White House tweeted out today show they’re three hours apart.

To say nothing of the fact that Kamala Harris is NOT in a secure facility if she’s not Photoshopped into this national security meeting. And of course, exposing CIA and other assets’ locations.

Notice something else pointed out here. The mics are not broadcasting. The President isn’t able to say anything to those he’s allegedly speaking to. https://t.co/WUbyb7vUH4 pic.twitter.com/7XNoOCHGq8

Media outlets across the political divide in the US and Britain have united in their condemnation over Joe Biden’s handling of the Afghanistan crisis amid what is being billed the biggest foreign policy catastrophe in 65 years.

Even Left-wing outlets such as CNN and The New York Times that would traditionally back a Democrat president have hit out at Mr Biden for his role in allowing insurgents to take Kabul after routing Afghan forces in just a week.

The Wall Street Journal condemned Joe Biden‘s statement ‘washing his hands’ of the situation, saying it should ‘go down as one of the most shameful in history by a Commander in Chief at such a moment of American retreat’.

As the crisis deepened, a CNN columnist said the ‘debacle of the US defeat and chaotic retreat in Afghanistan’ was a ‘political disaster’ for the US President and slammed his ‘failure to orchestrate an urgent and orderly exit’.

And an opinion writer in The Atlantic said there was enough blame attached for the Afghanistan crisis to ‘fill a library of books’, condemning the ‘betrayal’ of the Afghan people as he placed the ‘burden of shame’ on Mr Biden.

Meanwhile a New York Post editorial said Mr Biden’s claims that he ‘inherited’ his predecessor Donald Trump’s withdrawal plans were a ‘lie’ and the situation is ‘as humiliating an end as the rooftop scramble in Saigon in 1975’.

An opinion piece in The New York Times claimed that Mr Biden would ‘go down in history, fairly or unfairly, as the president who presided over a long-brewing, humiliating final act in the American experiment in Afghanistan’.

A Washington Post column said the situation ‘is on Biden, and it will leave an indelible stain on his presidency’, while a piece in USA Today said ‘this catastrophe is appearing on his watch, and he will have to take his lumps’.

Fox News ran a comment from Republican Senator Joni Ernst condemning the ‘slap in the face to the thousands of men and women who served in this war’ and a ‘total abandonment of a country and its people’ by Mr Biden.

Columnists in the British Press also hit out at Mr Biden today, with The Sun‘s editorial saying he ‘ignored repeated warnings, then withdrew crucial air support for the Afghan army it has spent billions arming over 20 years’.

Commons Foreign Affairs Committee chair Tom Tugendhat wrote in The Times that it was the ‘the biggest foreign policy disaster since Suez’ in 1957, while a columnist for the i condemned the ‘betrayal of Afghanistan’s people’.

Even Mika is mad!

Many are trying to blame Trump because he started the process of getting Americans out of Afghanistan after 20 years. However, Trump was working hard on a phased withdrawal that would protect Americans — even if that meant dealing with the Taliban.

I have agreed with the decision to leave. If you want to change a country, you have to flatten it first, as we did in Germany and Japan. You then have to commit to running it in the first few years and then staying there for another 70 or so years to ensure a couple of generations grow up under the new order. Oh, and one other thing: It has to have been a civilized country to start with. None of those things occurred in Afghanistan. We never subdued it, we never had a plan to stick around and run it until they were ready to take over, and it’s always been, and probably always will be Stone Age.

Biden simply pulled out, so intemperately that we left the Taliban a vast arsenal of weapons and vehicles (including planes). What’s been playing out over the past few days will get worse. The Taliban don’t recognize the Geneva convention. They will continue to do what they have already done — what all Muslim conquerers have done since Mohammed’s time: They will torture and kill the men, and take the women and children as sex slaves. Once having subdued the country and wiped out all remnants of the 21st century except for those usefully related to war, they will govern a country firmly rooted in 7th century Arabian values.

In addition, Iran, the Taliban, Hezobollah, and the rump of al Qaeda and ISIS, have got the measure of the man in the White House. They understand that America and Americans are sitting ducks. I think there’s a very big likelihood that we’ll see a sudden spike in mass terrorist attacks. As bin Laden said long ago, “When people see a strong horse and a weak horse, by nature they will like the strong horse.” For Muslims who dream of a worldwide Caliphate, America is the weak horse. China and Russia understand that as well.

Generally speaking, while we will not suffer as the Afghan people will, it’s going to ugly fast — at least, that’s my prediction.

Here’s where you kind of have to admire Biden. He entered federal politics 1973 and now, in his dementia, he seems to be determined to re-live the 70s or, at least, the worst of the 70s. To that end, in just seven months, he’s brought us the worst of the 70s: Inflation, a looming energy crisis, and now an ignominious retreat from a foreign country.

But there’s one thing that simultaneously fascinates and disheartens me: Although I no longer post at Facebook, I do check it out regularly because so many of my Facebook friends are Democrats. Checking out Facebook allows me to see what they’re thinking. And they’re not thinking about Afghanistan, the border, or inflation. None of the lefties I know have posted about any of those issues.

Instead, they are obsessively thinking about vaccines, masks, and how nice it is that Biden doesn’t do mean tweets. No fooling:

Day before yesterday, in my illustrated edition, I slipped in a video about mass psychosis. I think it’s worthwhile posting it here again.

The video explains that those with a desire for total power can induce mass psychosis in people by instilling in them complete and irrational fear. Once the person or party craving power has achieved that goal, it owns those people. When you have Democrats insisting that the government use its vast police power on ineffectual masks and a “vaccine” that is no better than a flu shot, although with worse side effects, you’re witnessing mass psychosis in action:

Whatever China’s timeline was before on trying to seize Taiwan, we all know they’re licking their chops now knowing that there will never be a weaker US administration in power. This isn’t a partisan issue. We’ve got to get tough before things really escalate. https://t.co/uUWty0GgwS

This sums up the American presence in Afghanistan
pic.twitter.com/yr9LnPf5Pw

Meanwhile, Edith Wilson is stepping up:

Ron Klain wanted Biden to rush back to DC yesterday afternoon to the Situation Room but Jill stepped in saying that Biden could ‘project his leadership’ from anywhere, per WH official

While the Taliban were moving to destroy 20 years of blood and work in Afghanistan- The White House was busy producing this. #WorstPresidentEver #ImpeachBiden pic.twitter.com/cgfqYJgLQi