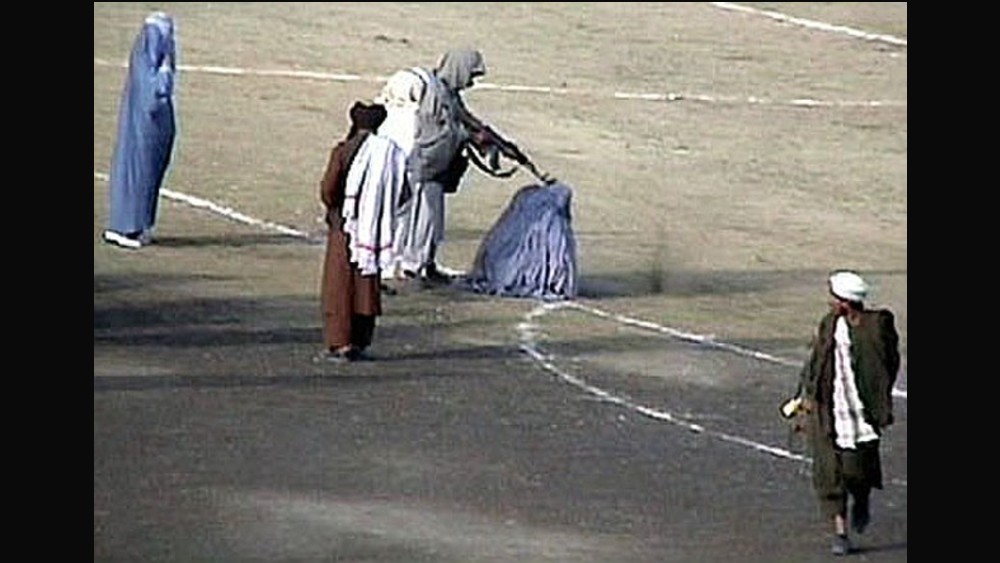 We need to rub Democrats’ noses in the fact that they are responsible for the horrors in Afghanistan, as well as the decay in the U.S.

On January 7, one day after the protest at the Capitol, I got a text from my closest friend of twenty years. Before I go into the text, she always knew I was a conservative and I always knew she was a Democrat. We focused on our lives rather than on our politics and it was a really wonderful friendship.

Throughout the four years of Trump’s presidency, no matter what false and wildly partisan things she posted on Facebook, I ignored that.

I ignored her mindless statements about “climate change,” statements that were utterly devoid of rationality but that relied solely upon the new morality of the Church of St. Greta of Thunberg.

I ignored when she made an annual trek to the streets wearing her stupid pink “pussy hat,” to protest a man who did nothing more than state — quite accurately — that, if you’re rich and powerful, a whole lot of women will allow you to do anything.

I ignored her during the whole #MeToo movement, which she latched onto hysterically as a way to destroy Trump and other Republicans.

I ignored her online weeping about “kids in cages.”

I ignored her strident support for BLM and “Defund the Police,” despite her happiness at living in a safe neighborhood, far from any inner-city slums, and with a hyper-attentive police force.

I ignored her fanatic posts about masks and lockdowns.

I ignored her insistence that biology is meaningless and gender is a voluntary construct.

And when I say “ignored,” I mean that I never challenged her on Facebook or in person. Our friendship was bounded by our shared values of marriage, children, and community. And again, it was a good friendship.

But then, on January 7, I got that text. I wrote about it here:

[C]ompletely out of the blue, I received a text from her: “I hold you personally responsible for what happened in Washington because you’ve been feeding people the fairytale about the election.”

I deleted her number because, when I’m angry, I tend to be intemperate. That means the number is completely gone. I never memorized it because my smartphone took care of that for me. I also cut her as a Facebook friend.

Today, I have to admit to being a little ambivalent about having deleted her number. You see, if I still had her number, I would text her a few pictures of what’s happening in Afghanistan — people being beaten, tortured, and murdered — along with stories about the women, starting with little girls, being dragged off to be raped. Now there’s a #MeToo outrage for you. I might also have sent links to reports about skyrocketing fuel prices and inflation, as well as stories about thousands of COVID-infected illegal aliens streaming across our Southern border and then distributed across America.

Perhaps I’d include this video, the first few minutes of which are truly awful:

And then, along with those stories and images, I would say, “I hold you personally responsible for what happened in Afghanistan and what’s happening across America because you’ve been using Facebook to feed people a fairytale about Biden’s competency and the benefits from the Democrat party platform.”

As I said, I cut myself off from any way to reach her. However, she’s just one person. Every person who voted for Biden is culpable and we need to rub their noses into it — hard and often. I continue to believe that massive fraud got Biden into the White House, but he also got a whole lot of votes. These people, who insist that the election was honest, should be told that they are personally responsible for little girls being kidnapped as sex slaves, for people being tortured in Afghanistan, for Americans trapped there with no way out, for inflation destroying the lives of old and poor people, for our energy dependency on the Muslim oil-producing states and Russia, for skyrocketing murders in inner cities devoid of police, for COVID’s (and crime’s, especially sex crime’s) spread through America cities as the illegal aliens pouring in from across the world are joined by Afghans.

We had a president who gave us peace, prosperity, and safety — a safety he spread around the world with his aggressive efforts to protect America and Israel. We also had a president who understood how you do a drawdown: First, you notify your allies. Second, you evacuate your own people. Third, you clean out incriminating information. Fourth, you see about getting to safety those who worked with you. Fifth, you get all weapons, vehicles, airplanes, and other military supplies out. And sixth and last, you get your troops out.

That’s how you do it — but these mindless, stupid, propagandized, indoctrinated fools blew it all up, not just the retreat but everything. If they’re open to reason, reason with them. But if they’re leftist drones, be as ugly to them as they’ve been to us. It’s game theory — we need to beat them at their own game by playing harder and rougher. Otherwise, they’ll never stop.

UPDATE: And someone sent me the perfect image — because after Joe’s 47 years in the public eye, everyone knew perfectly well what they were getting, and that was before his obvious senility: 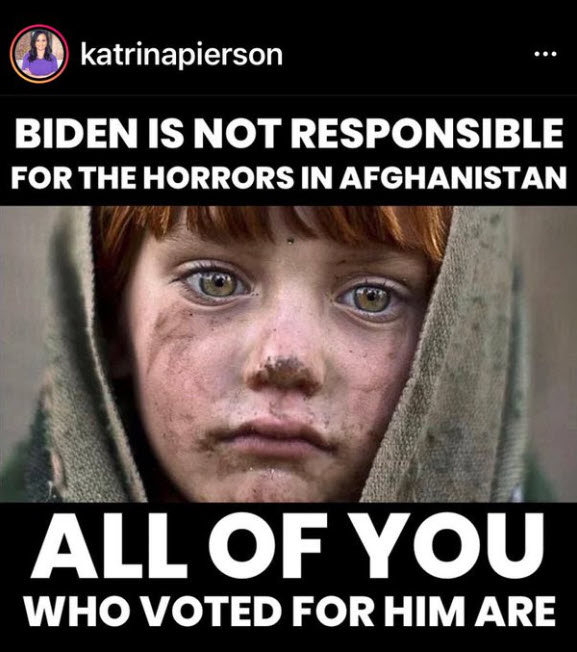 IMAGE: Taliban execute Zarmeena in Kabul in 1999 by the Revolutionary Association of the Women of Afghanistan (RAWA). Zarmeena was accused of murdering her husband, but let’s just say that such charges usually were, are, and will be a way to get rid of women.