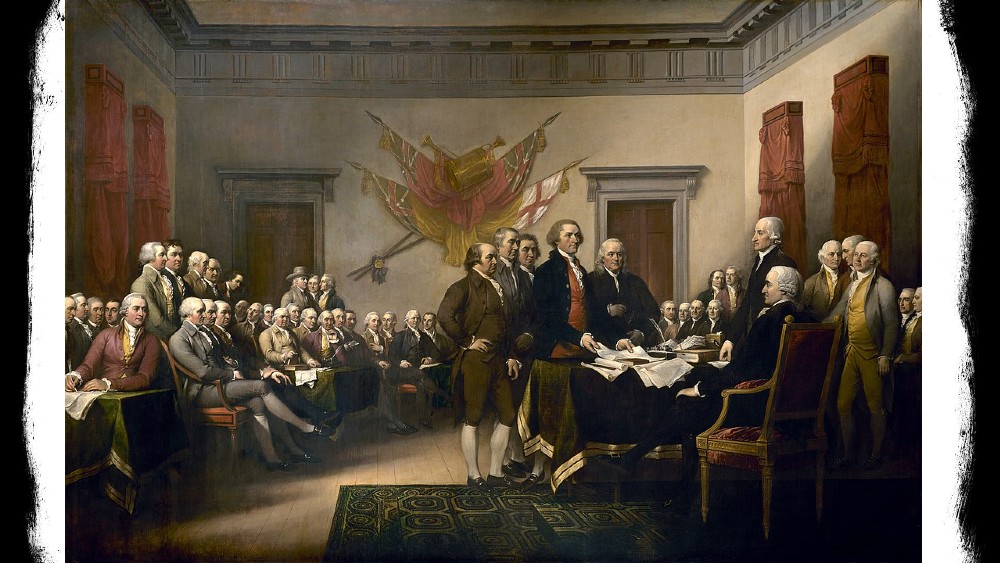 The opening words of the Declaration of Independence meant something different in 1776 than they do now, but they inevitably led to slavery’s abolition.

There won’t be an illustrated edition this week because I’m traveling in the Southeast, visiting various sites of interest to the Revolutionary War. So far, we’ve spent three fascinating days at Colonial Williamsburg and one day at Mt. Vernon. At both places, we’ve been on the receiving end of the standard obeisance to “enslaved people,” but neither venue went overboard. For example, at Mt. Vernon, in the gift shop area dedicated to books, the first row of shelves wasn’t about Washington but only about slavery. However, these books were serious histories, not Ibram X. Kendi garbage or the 1619 Project, and there were still several dozen books about Washington.

So, at least for now, Mt. Vernon, the focus remains on George Washington, an indispensable man. Likewise, in Colonial Williamsburg, after the ritual apology, the site focuses on the day-to-day mechanics of life in the Colony of Virginia in the mid-18th century. I learned a lot about smithing (silver, iron, and tin), shoe making, book-binding, a milliner’s shop, the apothecary, and more. People of all colors (and it takes a lot of people to make a place like Colonial Williamsburg function) were uniformly friendly and informative.

One of the activities we did at Colonial Williamsburg was to attend a little theatrical evening that was supposed to help us understand what was going on in Virginia when its assembly voted to approve independence. As part of the evening, all the participants received little slips of paper with statements from actual attendees at the assembly, both pro and con breaking from England. (As it happened, the cons yielded and Virginia voted unanimously for independence.) We got the chance to read aloud what was written on those papers as we acted out the parts of the men assembled.

Either because that’s the way it really played out or because the quotations were paraphrased, what I noticed instantly was that the pros just said “We want independence because Britain has abused us too long,” while the cons were very specific: The bullying from patriots was the opposite of liberty; the benefits flowing from the home country were too real and great to throw overboard; the patriots were insane to stand against the might of the great British military; the British would ally with the Indians, forcing a two-front war the colonists couldn’t win; etc. These specifics made a lot of sense when weighed against the fact-free words “independence” and “liberty.”

It occurred to me, as I sat there listening, that the colonists who wanted to break from Britain used the words “independence” and “liberty” in much the same way we conservatives use the phrases “Deep State” or “fake news” — they are shorthand for deep and rich ideas that take a while to explain. Thinking about those words — that 18th century shorthand — I had an epiphany: Contrary to the claim today, the patriots were not being hypocrites when they said “We hold these truths to be self-evident, that all men are created equal, that they are endowed by their Creator with certain unalienable Rights, that among these are Life, Liberty and the pursuit of Happiness.”

That is, if I’m correct, the Founders were not evil men who, even as they insisted humans were created equal and entitled to liberty, denied equality to women and both equality and liberty to Blacks. The concept of equality and liberty for Blacks and women was not part of their mental framework. That came later.

Instead, when they used the words “equal” and “liberty,” those words had a very specific, limited shorthand meaning. It was only later that those same words made thoughtful people recognize what equality and liberty really meant.

It starts with “all men are created equal.” Today, we understand that to mean that no person is born better than any other person regardless of race, color, creed, sex, etc. It is a moral concept.

That’s not what the phrase meant in 1776 or the years leading up to that. Back then, it had a purely political meaning: Kings, who had always been deemed the anointed of God, and aristocrats, who were long accepted as the “betters” of everyone from birth onward, were neither God’s anointed nor any other man’s “better.” As a matter of political hierarchy, said the colonists, there were no men who were born with political rights greater than any other men. This idea was the logical follow-up of the more limited ideas of the Levellers, a political movement from more than 100 years before, during the English Civil War that had ended with a king’s beheading in 1649 and, in 1689, led to the English Bill of Rights from which much of our Bill of Rights was drawn.

So who was equal politically? Simple. White men. Why? Because, when it came to political rights within the Anglosphere, those rights had been held since time immemorial by White men. Thus, the phrase “all men are created equal,” meant that all White men are born with equal political and legal rights. That’s it. That’s what the idea of equality meant back then.

The Founders simply restated a core English idea: White men were entitled to liberty, which meant representative government. The opposite of liberty was having a government that made decisions for you without you having a voice in that government. Thus, taxation without representation was the antithesis of liberty. Had these White men been represented in Parliament, they would have had to accept those taxes if Parliament nevertheless voted to impose them.

Ultimately, the Founders and the people supporting their vision had a very narrow understanding of both equality and liberty. They were not being hypocrites to deny these blessings to women and Blacks who had never previously been encompassed within the notion of British political equality and liberty. That’s how the shorthand worked. End of story.

However, as well all know, these words have meaning separate from the shorthand. They can also mean, as we understand them today, that all human beings are created equal. Certainly, the Bible says that, and the colonists were both literate and religious.

Likewise, the word liberty, especially to those who know their Bible, obviously refers to freedom from slavery. Whether one is thinking of the Exodus, when the Jewish people broke free from Pharaoh’s slavery, or one is thinking of the Eighth Commandment (thou shalt not steal…including stealing a person’s liberty) the Bible recognizes that it is a human right not to be enslaved. (Note, though, that even the Bible acknowledged the reality of slavery and, so far as I know, enacted the first abolition law, requiring Jews to free their Jewish slaves after seven years.)

As the Revolution continued, the Founders, who were principled men, were increasingly aware that their words had a meaning greater than that narrow political shorthand. (And of course, there were those who realized it from the very beginning.) But taken as a whole, it took time for many of them to realize that the words in the Declaration of Independence had a moral component. At some point, most of them, including those who owned slaves, were troubled by the institution. Washington is a perfect example of someone who moved from a  political understanding of the words to a moral understanding, such that he eventually freed his own slaves, although only after his death, through his will.

Washington’s conduct — freeing the slaves after his death — demonstrates perfectly the chasm between being troubled by something and making a huge personal sacrifice. All of the slave-owning Founders eventually said they’d be happy to see the institution abolished, but none could make the break. In that, they were human and weak. And consider that, by the act of rebelling against Britain, they were already making the biggest sacrifice of all, for their lives would all be forfeit if they lost their gamble. There is only so much you can ask of most people.

On a smaller scale, the Founders remind me of people (like me) who inveigh against a government handout to rich people (like huge rebates for buying expensive electric cars) but, they find themselves in the path of such a handout, will still take the money because they’d be fools to leave the money lying on the table (as I did many years ago when we bought an electric car). Likewise, if no one stops Joe Biden’s illegal executive order to give $10,000 to each person holding a student loan, any person who turns down the money is foolish — if it’s going to be given away anyway, take it.

And yes, I understand that owning another person is a moral wrong that far transcends rebates and illegal government grants but, as I said, the Founders were human and, in this way, weak.

In sum, at the start of the break from Britain, for most (although not all) of the colonists, “equality” and “liberty” were political concepts that had always applied only to White men and that’s the way in which they used those terms. Time and wisdom brought many of them to realize that these words had a moral component. Even when they acknowledged that they were unable and unwilling to break the economic chains that bound them. However, humans don’t change ancient ways overnight. What matters is that these men were also the beginning links in a chain of wisdom that eventually led to a Civil War in which 600,000 men died in the crucible of a fight to end slavery on American soil.