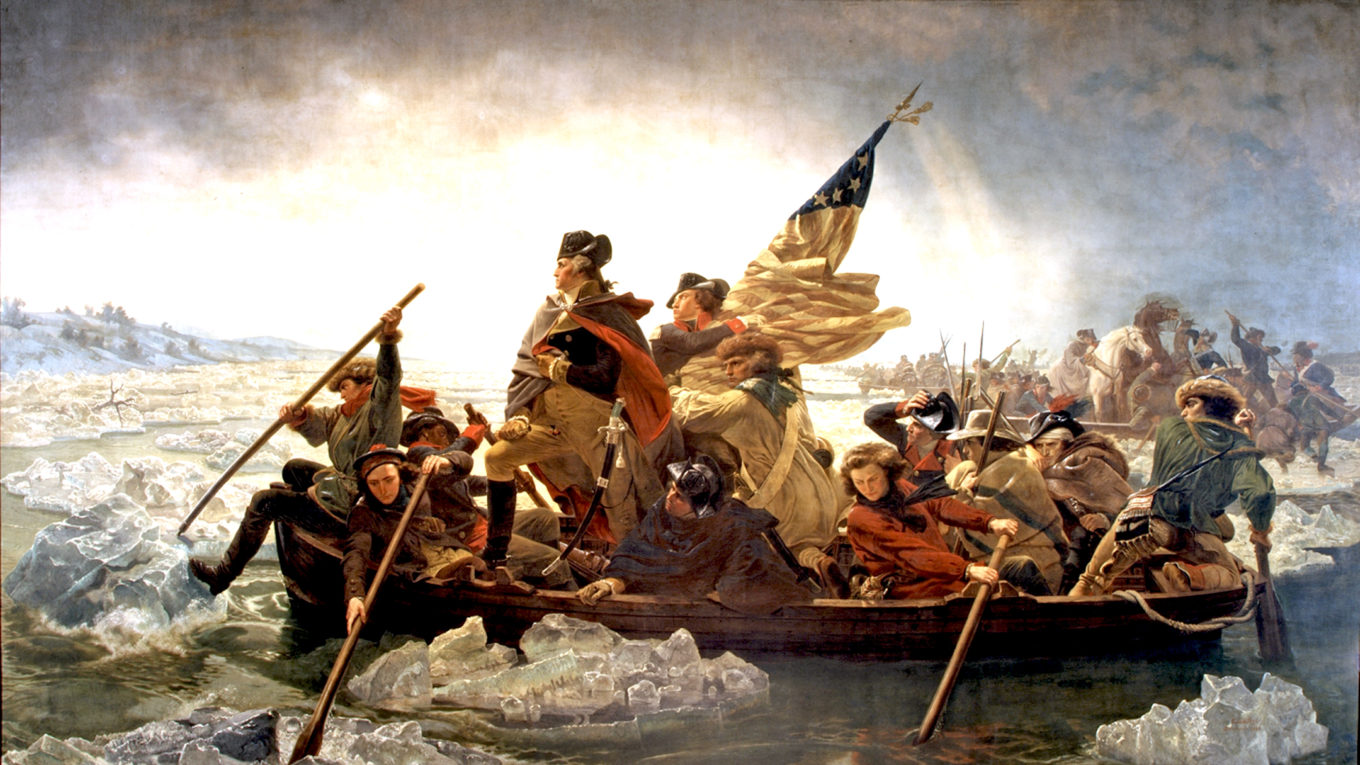 Today marks the single most important battle in our nation’s history, George Washington’s decisive victory over the Hessians at the Battle of Trenton on Dec. 26, 1776 saved the American Revolution from certain failure.

It is impossible to overstate the importance of the Continental Army’s stunning victory this day in 1776 at the Battle of Trenton.  On December 1, 1776, virtually everyone thought the American Revolution over and the American cause lost.  All that remained was for the formal negotiation of the colonial surrender.

But George Washington, a man with titanium cajones and inhuman persistence, was not willing to concede defeat.  He developed a plan that was one of the most audacious in history — or as he called it, code name “Victory or Death.”

As a brutally cold night fell on 26 December, 1776, George Washington, led from the front his defeated, starving, cold, and bedraggled soldiers to save the American Revolution from certain defeat.  A&E did an exceptionally good movie recounting the event some years ago — The Crossing — that surprisingly is on Youtube in toto.  Take time to watch it if you have not seen it before.

The situation on Dec. 26, 1776, was dire.  The British Army under Gen. Howe had spent the last five months thoroughly beating the Continental Army in one battle after another. None were decisive, but the cumulative effect was devastating.

In July 1776, Gen. Washington had commanded 23,000 soldiers arrayed in defense of New York. Six months later, by December 1, 1776, and after Howe had begun his offensive operations, Washington’s army was reduced to only a few thousand men and they were dispirited, under-equipped, and in full retreat through New Jersey. Moreover, the majority of Washington’s soldiers were on one-year enlistments and most of them would soon be leaving the service on January 1. Prospects for raising new units were dismal.

There were few in America or Britain who thought anything other than that the turn of the New Year would mark the effective end of the Revolution. Even Washington, whose persistence in the face of hardship was ungodly, could see the reality of his situation. In December, he had written to his cousin in Virginia, “I think the game is pretty near up.” But Washington was determined not to go down without one last great gamble.

Washington hatched an incredibly aggressive plan. His forces would cross the Delaware River on Christmas night. They would march the ten miles to Trenton, then execute a night attack on the Hessians occupying the town.

To steel the hearts of his remaining soldiers, on Christmas Day, 1776, Washington had his officers read to the soldiers Thomas Paine’s The American Crisis No. 1 — an appeal to patriotism and resolution in their darkest hour. It’s opening lines are some of the most well-remembered and oft-quoted in American history.

THESE are the times that try men’s souls. The summer soldier and the sunshine patriot will, in this crisis, shrink from the service of their country; but he that stands by it now, deserves the love and thanks of man and woman. Tyranny, like hell, is not easily conquered; yet we have this consolation with us, that the harder the conflict, the more glorious the triumph. What we obtain too cheap, we esteem too lightly: it is dearness only that gives every thing its value. Heaven knows how to put a proper price upon its goods; and it would be strange indeed if so celestial an article as FREEDOM should not be highly rated.

Then on that bitterly cold Christmas night, Washington marched his soldiers to McConkey’s Ferry, ten miles north of Trenton. Washington put Col. John Glover and his men of the Marblehead Regiment, all of whom were experienced seamen, in charge of the river crossing. They managed to get everyone in Washington’s main body across the river, including horses and artillery pieces. Two soldiers died of hypothermia during this phase of the operation.  Meanwhile, two other supporting detachments tried but were unable to complete the river crossing because of ice floes.

The march took longer than expected and the units were not in a position to launch the attack until long after dawn, at 8 a.m. on December 26. While the Hessians had small guard units a mile outside of town, the main body of the Hessians did not react quickly when Washington’s forces began their attack. Consequently, the Hessians were caught largely unawares as Washington’s army advanced into the town from two directions. Hessians poured into the streets only to be devastated by musket fire, cannon fire, and the bayonet. The commander, Col. Raal, tried to organize a defense but was mortally wounded.

The entire battle was over in less than an hour. The feared Hessian Regiment was no more. The Hessian forces lost 22 killed in action, and 896 captured, a number that included 83 wounded. Miraculously, the Americans lost no men (other than those who died of hypothermia) and suffered only five wounded.

And for his part, Washington was not yet done in those bitterly cold days of winter. Within days, he would win another small but important battle, this one at Princeton.  It is to these men and their unconquerable spirit that we owe the founding of our nation.

God Beless America, Merry Christmas, Happy New Year, and may you enjoy a remembrance of the Battle of Trenton this day.