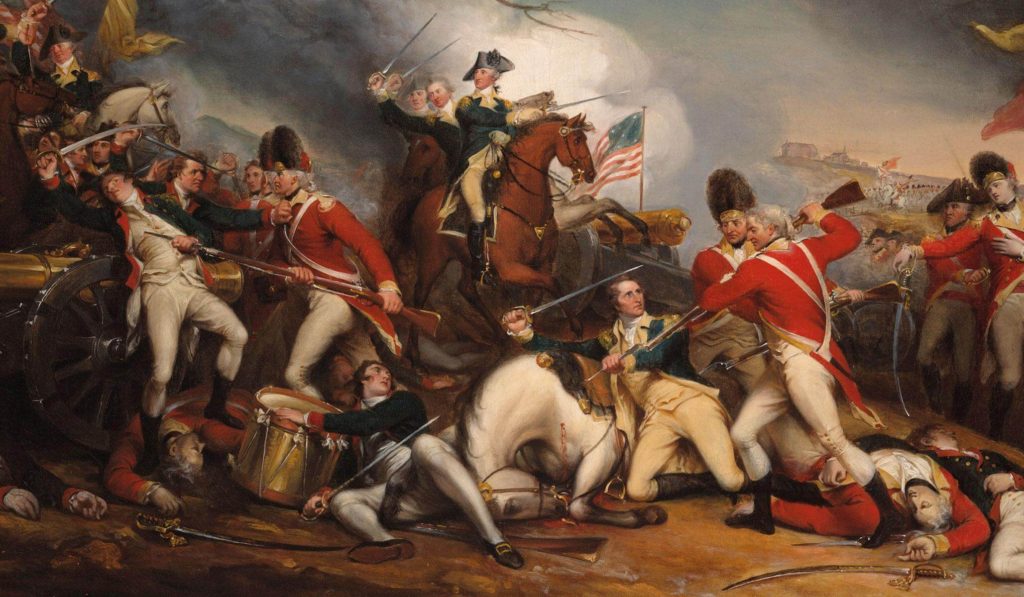 After the 2nd battle of Trenton, Washington stealthily withdrew his army from their defensive positions, slipped past Lord Cornwallis’s main army in the night, and set out along back roads to Princeton. Once there, he intended to engage the British rear guard, consisting of about 1,600 men, that Cornwallis had left there.

Coming at Princeton from the southwest, Washington detached General Mercer and 350 men to destroy the Stony Creek bridge along the route he expected Cornwallis to use when reinforcing Princeton. None of the Americans knew that Cornwallis had left his rear guard with orders to march from Princeton and join the main force near Trenton that morning.

As General Mercer came near the bridge with his small force, he ran directly into the trailing elements of one of the rear guard units crossing the bridge. A fight ensued in which General Mercer’s small force was overrun and the General himself was bayoneted and left for dead.

General Washington ordered General Cadawalder, who was commanding a brigade of untrained militia, to block the advancing British force that had just overrun General Mercer. Cadawalder got the men on top of a small hill and tried to get them into fighting formation, but Cadawalder’s green troops took one look at the advancing British soldiers and the retreating remnants of Gen. Mercer’s small force and began to run away themselves.

Washington set his Continental soldiers and his rifleman into a position to support the militia, then rode into the middle of the retreating militia soldiers and by force of will alone stopped their retreat. He began leading them from the front of the line towards the British, giving commands for them to hold their fire until only thirty yards separated the two lines. Washington, mounted on a horse at the front of the militia line — making the most inviting target for the — gave the command to fire. Both the British and the militia fired near simultaneously. The battlefield was immediately hidden for a few seconds from the smoke of a thousand rifles.

One of Washington’s officers, John Fitzgerald, pulled his hat over his eyes to avoid seeing Washington killed, but when the smoke cleared, Washington appeared, unharmed, waving his men forward.

A continental unit began advancing on the flank of the British and American as cannon began firing grape shot into their lines. The British force collapsed and the commander ordered a retreat. Some of the British force escaped back across Stony Creek Bridge towards Cornwallis’s main body still some ten miles distant. The rest fell back into the town of Princeton.

Washington reformed his men and marched on Princeton. As the Americans moved in, most of the British ran off, but a sizable number took up a position inside Nassau Hall on the Princeton College campus. Alexander Hamilton brought up three cannon and began shelling the building while an infantry unit broke down the front door. The British inside the building immediately surrendered, ending the Battle of Princeton.

By the time the last shots were fired that day, Washington’s force had suffered about 40 men wounded and 40 men killed. The British had suffered 100 men killed, 70 wounded, and 280 captured.

At the conclusion of the battle, Washington wanted to march his army to capture a great prize. Twenty miles away lay New Brunswick, NJ. And there, in a small garrison, was a detachment guarding the pay chest for all of the British soldiers in America. That chest contained £70,000 pounds sterling. Two of Washington’s generals, Henry Knox and Nathaniel Greene, talked Washington out of it. His men, many worn down by almost six months of constant warfare and marching, needed to break. Washington reluctantly agreed and led the Continental Army into winter quarters at Morristown, New Jersey.

The American victory at Princeton came with significant consequences for Britain. Cornwallis, learning of the victory, immediately marched to New Brunswick, fearing that Washington would attack there next. Further, he ordered all of the small British and Hessian detachments quartering throughout New Jersey to abandon their posts and consolidate at New Brunswick as well. By that order, the British relinquished control of southern New Jersey to the Continentals and would never again regain it. The British retreat was strategic, but it was a retreat none the less.

From Charleston to Boston to Trenton and Princeton, America had survived the worst Britain could throw at it in 1776 and not just survived, but sent the British into a retreat. The American colonists, after the dark days of the summer and Fall of 1776, once again came to believe that they could defeat the British in this revolutionary war.