Sometimes, to their creator’s dismay, ideas take on a life of their own.  In the wake of Comedy Central’s decision to censor a South Park episode that didn’t actually draw Mohamed, but merely suggested the possibility of doing so, Molly Norris came up with the idea of “everybody draw Mohamed Day.” Then, terrified by the realization that people actually thought her idea was a good one — and no doubt afraid of becoming the next chick-filet in the Islamic book of dead people — Norris quickly backed off.  As I said, though, good ideas have a life of their own, and drawing Mohamed is definitely a good idea.

It’s a good idea, quite obviously, because modern Western society is predicated on free speech.  Admittedly, there are gradations to that free speech, with America standing at the pinnacle of what is allowed and protected as an ordinary part of civil discourse.  Speech becomes increasingly more regulated as one travels through other Western nations.  Nevertheless, any nation that stands on the shoulders of the Enlightenment gives a nod to the importance of freely expressed ideas and information.  When we give up free speech, we give up a significant part of our identity.

Lately, though, European nations and American TV stations have willingly abandoned any semblance of commitment to the notion of free speech.  And what’s really dreadful about this practice is that it’s not even driven by the traditional rationale for speech restriction, which is to protect the ruling party from internal challenges to its control.  Instead, this is a purely fear-based abandonment.  It has nothing to do with principles or power.  It is, instead, a craven desire to avoid screaming mobs wielding sharp swords.

The various Western nations (and American TV stations) engaged in cultural retreat dress it up as respect for the “other.”  That respect, however, exists only because we fear that “other.”  Sam Harris, in what is probably the most worthy article the Huffington Post has ever published — and one that I strongly urge you to read — gets to the heart of the matter.  After discussing (1) Geert Wilder’s martyrdom at the hands of the Dutch political class for his film Fitna, a film that reveals how closely Islam tracks on Mohamed’s incendiary rhetoric, and (2) Kurt Westergaard’s life in hiding thanks to the very first Mohamed cartoons, Harris explains how Islam is gaming the West:

Wilders, like Westergaard and the other Danish cartoonists, has been widely vilified for “seeking to inflame” the Muslim community. Even if this had been his intention, this criticism represents an almost supernatural coincidence of moral blindness and political imprudence. The point is not (and will never be) that some free person spoke, or wrote, or illustrated in such a manner as to inflame the Muslim community. The point is that only the Muslim community is combustible in this way. The controversy over Fitna, like all such controversies, renders one fact about our world especially salient: Muslims appear to be far more concerned about perceived slights to their religion than about the atrocities committed daily in its name. Our accommodation of this psychopathic skewing of priorities has, more and more, taken the form of craven and blinkered acquiescence.

When we play into this Islamic game — “We, your resident Muslims, promise to live up to our putative reputation for peace as long as you don’t exercise those of your freedoms that put us in a killing rage” — we give up the essence of who we are.  We are no longer the heirs of Voltaire and the Enlightenment, of the Founders and the abolitionists.  We are no longer free people.  Instead, we are slaves to our fears, with our lives increasingly constrained by the random and irrational demands of small subsets of our western societies.

That the demands are irrational is another reason to resist the increasingly shrill imperative to cease and desist from creating and publishing any drawings that offend Muslim sensibilities.  And please keep in mind here that this is not just about Mohamed images.  In our short attention-span world, I’m willing to bet that large numbers of people have already forgotten that, in years past, Muslims have demanded that the countries in which they live change their ice cream logos, clean up the Piglet tissue boxes, and remove their historic statutory (or have it forcibly removed).

Zombie correctly points out that, once we start ceding to resident Muslims the right to determine what is provocative (to them, that is), there is no end:

This is not an argument over the right to be “provocative” or “offensive”; rather, is it something much more significant — an argument over who gets to determine what counts as provocative or offensive in the first place. The Western world dragged itself out of the church-dominated Dark Ages and into the Enlightenment in part over this precise issue: The freedom to engage in speech and actions which formerly had been classified as the crime known as “blasphemy.” It seems such a trivial and quaint issue in retrospect, and hardly worthy of note from our hyper-secularized 21st-century perspective, but tell that to the millions of people who for centuries lived under the yoke of governments which used accusations of blasphemy and other religious misbehaviors as a primary tool of tyranny and oppression. The modern world dawned with the American and French Revolutions and the emergence of the explicitly secular state — the Americans rejecting the Church of England as Britain’s legally enforced national religion, and the French shrugging off centuries of acquiescence to domination by the Catholic Church in civil affairs. In both cases, new governmental paradigms were established in which there was an inviolable separation of church and state, which in practice meant no civil laws enforcing religious doctrines and (most importantly for our discussion) no laws against blasphemy.

So Everybody Draw Mohamed Day is a good thing because it affirms who we are — an Enlightened Western civilization dedicated, in varying degrees, to free speech — and because it reminds everyone that, in a pluralistic society, no one group gets to use violence and intimidation to engage in capricious, and increasingly restrictive, decisions about what is offensive.

To me, though, the most important reason for observing Everybody Draw Mohamed Day is to remind us, not of who we are, but who we are NOT.  As a nation, we are not Muslims.

Of course, some of us are Muslims, but those who are, at least in America, are Muslims voluntarily.  This is, after all, a a nation dedicated to the proposition that its citizens can worship freely.  Provided that we do not impinge on the public well-being, we are allowed to choose our faith, follow our chosen doctrine, and engage in the many and varied religious observances so freely available in this great land.

If I’m Catholic, I get to go to Mass and, if I’m very traditional female worshiper, I can wear a lovely lace mantilla in church.  If I’m Jewish, I attend my services on Friday night and Saturday morning.  If I’m ultra-Orthodox and male, I wear a prayer shawl; if I’m female, I wear a wig and modest clothing.  If I’m Mormon, I wear my ritual undergarments and have reserved to me the special privilege of access to the Temple.  If I’m Buddhist, I engage in contemplation.  If I’m Muslim, I pray five times a day and abstain from alcohol.  If I’m Unitarian, I believe anything I damn well please, as long as I do so in civil and liberal fashion.  Heck, such are America’s blessings that I can be nothing at all, turning my back on God, and sneering every time I see a coin with the imprint “In God We Trust.”   I am what I believe I should be, what my family raised me to be, and what my chosen religious community practices.

But if I accede to Muslim demands that I refrain from drawing Mohamed or pigs or boars or ice cream logos or buddhas, I have tacitly conceded that I am Muslim.  After all, I am conforming my behavior to Muslim doctrine.

And once you’ve crossed that invisible line, a line known only to your new Muslim overlords, woe unto you if you try to reverse that conversion process.  Apostates, by turning their back on Mohamed, deserve death.  So really, you’re damned if you do and damned if you don’t.  If you don’t comply with all the Muslim restrictions, they threaten to kill you — and if you do comply with all the Muslim restrictions, they still threaten to kill you.

So this is where the rubber hits the road.  You’re between a Muslim rock and an Islamic hard place.  Do you take a stand now, while your freedoms still mean something, or do you simply acquiesce, step by step, until you find that you have no freedoms at all, that there are no compatriots willing to stand by you in the fight, and that y0ur remaining options are between a living or an actual death?

The problem is not, as is often alleged, that governments cannot afford to protect every person who speaks out against Muslim intolerance. The problem is that so few people do speak out. If there were ten thousand Ayaan Hirsi Ali’s, the risk to each would be radically reduced.

Whether you realize it or not, this is war.  When we draw Mohamed today, we don’t do so to be offensive, or provocative.  We do so to assert our identity and to declare, standing shoulder to shoulder with our fellow soldiers in this war, that we are Westerners dedicated to freedom of speech and freedom of worship.

In that spirit, and with all due respect to Muslim sensibilities (meaning I won’t draw Mohamed immersed in urine, covered in fecal matter, attached to animals, or any other such demeaning imagery), here is my image of Mohamed, pictured in this reverential medieval Islamic art as a swaddled baby on the day of his birth: 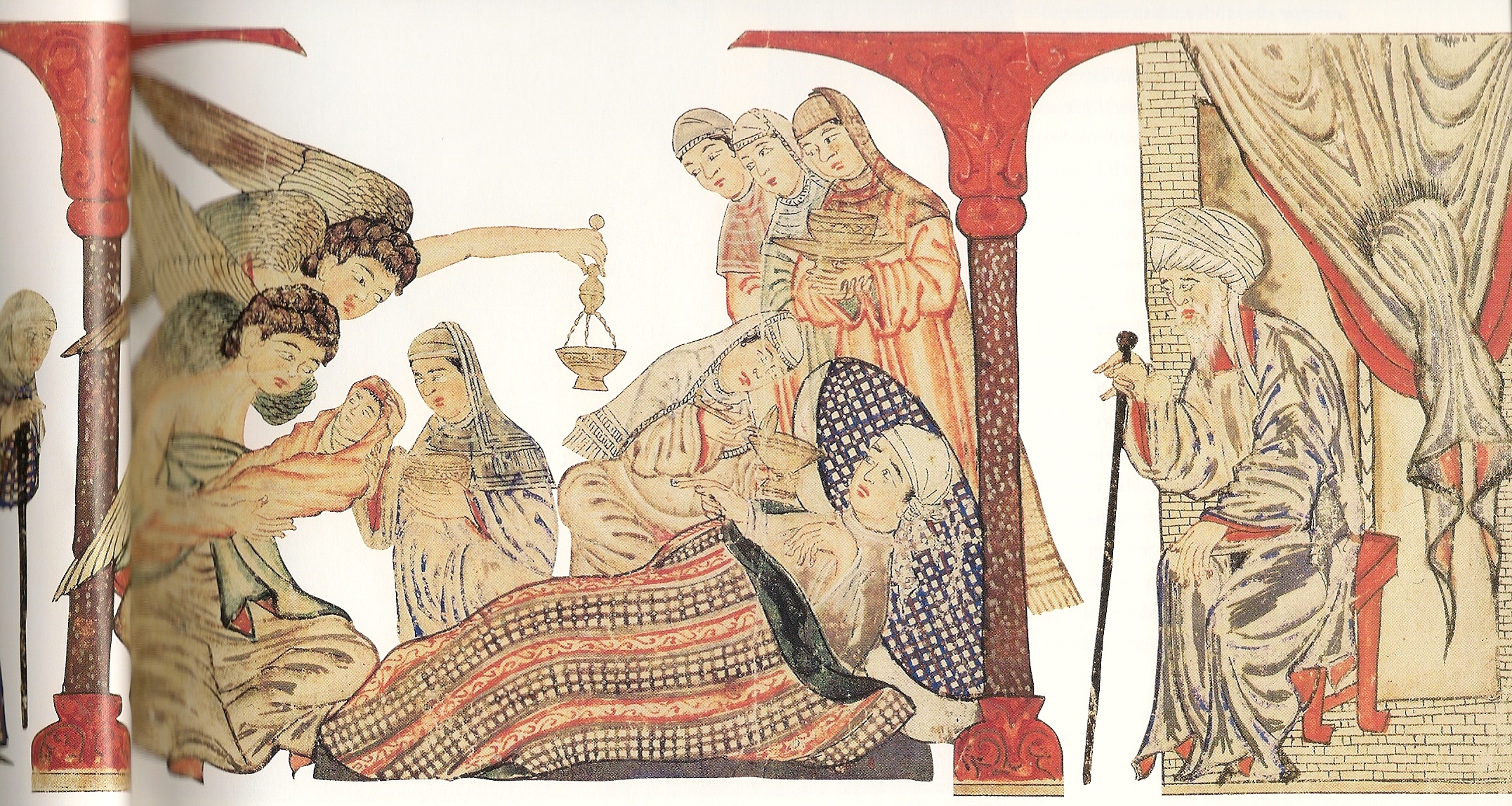 Looking for Lissa (who reminds us that Islamists aren’t averse to their own, very vile, cartooning to achieve political goals and intimidation)

Liberty Pundits (which has a nice nod to me, which I very much appreciate)

And please re-read Broken Windows, which explains why standing up now is so very important

JoshuaPundit explains why he isn’t participating, and where our energies would be better spent

[Small update:  I’ve very lightly edited the post to get rid of verbal tics and redundancies.  They do tend to slip in.]