An illegal alien is, by definition, a criminal:  the person snuck into the United States in the dead of night (so to speak), and has no right to be here.

That’s not how our president sees it:

A student, who appeared via Skype, asked: “My question for the president is, why [is the government] saying that deportations have stopped — or the detention of many students like me, why is it that we are still receiving deportation letters like this one?”

Obama answered, “We have redesigned our enforcement practices under the law to make sure that we’re focusing primarily on criminals, and so our deportation of criminals are up about 70 percent. Our deportation of non-criminals are down, and that’s because we want to focus our resources on those folks who are destructive to the community.

“And for a young person like that young woman that we just spoke to who’s going to school, doing all the right things, we want them to succeed,” Obama said.

Hmm.  So the thief breaks into your house.  He doesn’t attack you physically.  You might not even know he’s there.  He simply empties your refrigerator, takes money from your safe, goes through your medicine cabinet and takes your books.  You call the police, but they tell you that, now that he’s in your house, and since he hasn’t hurt you, you should just be cool.  Indeed, they say, with luck, he’ll take all your possessions, and set himself up in his own house, with his own refrigerator, medicine cabinet, money and books.

I don’t like our president.  The more I learn about him, the less I like him.  I just keep telling myself that we (America and poor Israel) just have to hang in there for another 18 months.  Of course, considering that the American people imposed this walking disaster on us in the first place, perhaps I’m being foolishly optimistic in assuming they’ll collectively wise up by 2012.

I’m not the only one, incidentally, who is finding it unnerving to peer into the president’s psyche.  Zombie peered too, and finally figured out what’s going on (graphic reprinted with permission): 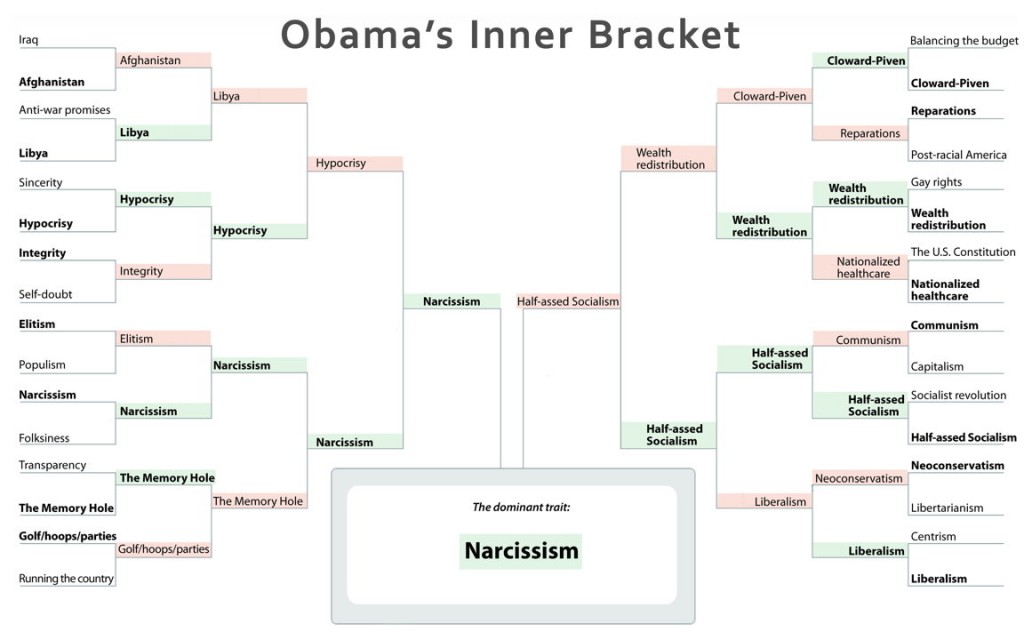