During this long night, Obama seems to have hung out a bit watching events before going to bed in preparation for a campaign junket to Las Vegas.  (One Las Vegas paper does not appreciate that effort.)  The next day, the administration started playing the blame game.  First, Obama and his shills blamed a 14-minute nothing of a video.  To add verisimilitude to an otherwise unconvincing narrative, the government ignored the First Amendment, arranged for the video maker to be arrested for exercising his right of free speech and, seven weeks later, keeps him imprisoned.  (And yes, he was ostensibly jailed for a parole violation, but I think we all know that the way he was treated was a farcical overreaction that can only be explained as part of a larger cover-up.)  Just so you know, they do the same kind of thing in China, which is not blessed with a First Amendment.

When the video story fell apart, Hillary said events in Benghazi were her responsibility (although she was careful to blame unnamed subordinates for the actual security failure).  Interestingly, neither the administration nor the media demanded her resignation or even an investigation.  When the Obama administration started to turn its knives on Bill Clinton for allegedly giving bad campaign advice, Hillary leaked that, well, no, really, she’d done everything she could to increase security, but nobody (read:  the White House) would let her.

With the State Department pushing back, the next obvious culprit was the CIA — especially once we learned that Woods and Doherty had begged the CIA for help.  The media and the White House were thrilled.  Thrilled, that is, until General Petraeus said that no one on his watch had refused help.  Suddenly, all eyes (except, of course, for mainstream media eyes) were back on the White House.

Next up for blame?  The Pentagon, of course.  Leon Panetta lamely explained that “Golly, it was dangerous out there and the military never sends its troops into danger, don’t you know.”  Panetta’s excuse was ridiculed by people who care and accepted as the God’s honest truth by the mainstream media.  The White House again heaved a sigh of relief.

But then, darn it, Lance Woods’ father refused to slunk back into the night.  Instead, he told a few home truths:  Obama was a cold fish, Hillary lied again about the video, and Joe Biden . . . . Well, there really aren’t words for a man who walks up to a bereaved father and makes vulgar remarks about his dead child’s anatomy.  The MSM kept silent on this one too, but enough people (plus Fox, of course) were agitating that the story suddenly started to spread — and that despite the media’s by now quite valiant efforts to ignore it to death: 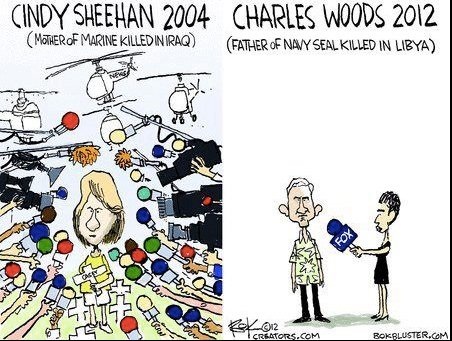 Mother Nature suddenly seemed to send a reprieve to Obama: A Category 1 hurricane that, while not strong, managed to blow directly landward, wrecking havoc across vast swaths of the heavily populated Northeastern seaboard.  While Obama has not been forthcoming with pictures of him handling Benghazi, he rushed out photos of him meeting with his Council about Hurricane Sandy, hugging bereaved Hurricane victims, and generally looking manly and noble amidst the rubble.

Too bad for the President that, four days before the election, things aren’t going so well in those areas damaged by the Hurricane.  People on Staten Island are suffering terribly and vocally. This may well be because, as Danny Lemieux suggested to me, Staten Island is staunchly Republican.  However conservative political leanings certainly don’t explain the disaster in New York’s Public Housing apartments, which have no power and no plumbing.  As always, Matt Drudge neatly sums up the situation:

So, here we are, President Obama, four days before the election, and you’re still not off the hook. Indeed, as of today, it’s entirely possible that things are about to get a whole lot worse for you. Your blame game started falling apart when all the other suspects (the State Department, the CIA, the Pentagon) seemed to have followed your absent lead.  That was all negative evidence, though, that you weren’t doing anything to help Americans under Jihadist attack in Libya.  That is, there was no smoking gun pointing to your involvement and subsequent dereliction of duty as Commander in Chief.  But now there is (emphasis mine):

The Benghazi debacle boils down to a single key factor — the granting or withholding of “cross-border authority.” This opinion is informed by my experience as a Navy SEAL officer who took a NavSpecWar Detachment to Beirut.

Once the alarm is sent  – in this case, from the consulate in Benghazi — dozens of HQs are notified and are in the planning loop in real time, including AFRICOM and EURCOM, both located in Germany. Without waiting for specific orders from Washington, they begin planning and executing rescue operations, including moving personnel, ships, and aircraft forward toward the location of the crisis. However, there is one thing they can’t do without explicit orders from the president: cross an international border on a hostile mission.

That is the clear “red line” in this type of a crisis situation.

Please read the whole thing.  What’s apparent is that, as a matter of law, the only person who could have helped in Benghazi was the president himself.  The President’s authority in this regard is the equivalent of the famous nuclear brief case or red phone or red button that featured so prominently in voters’ minds during the Cold War years.  Back then were always asked to consider “whose hand should be on the button.”

Regarding Benghazi, everyone else could plan and argue and organize, but only the President had the power to make it happen.  And nothing happened.  Hillary was right:  it was 3 a.m. and Obama didn’t answer the phone.  Damn him!

*A spokesman for the National Security Council denies that there was a real-time video feed.