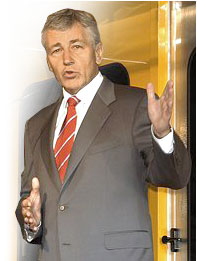 Chuck Hagel apologized for making a fairly nasty gay slur more than a decade ago.  The execrable Andrew Sullivan is proud of Hagel, especially because Hagel’s mea culpa wasn’t accompanied by a companion mea culpa to the Jews and the State of Israel, as to both of which Hagel has directed a boatload of smears, insults, and threats.

According to Sullivan, Hagel recited his dictated apology perfectly, and it’s a mercy that Andrew and his ilk trained Hagel so well, because it won’t be the first apology Hagel will probably be called upon to make.  Why?  Because of the Joos, whom Sullivan views in much the same way the Arab crowd does:

The rest is smears – and there will be more to come, knowing how fanatical and ruthless the Greater Israel lobby is.

Hagel need not worry too much, though. Sullivan rightly divines that, in Obama’s America, as long as you make nice to the gays, it’s okay to start preparing the pathway to a new Jewish genocide:

This [i.e., Hagel’s ability to appease various Leftist victim groups] is fast becoming a litmus test of whether an American president can nominate a defense secretary without getting the blessing of the AIPAC chorus. Yes, we have sunk that far. But this could be a turning point for a saner Middle East policy.

I think the Palestinians have a phrase for a “saner Middle East policy“:  “There is a Jew behind me. Come and kill him.”

It’s not just that Sullivan is ever more proudly wearing his antisemitism alongside his homosexuality.  It’s not even as if he sounds as if he’s reading out of the Cliff Notes version of the Protocols of the Elders of Zion.  What’s so horrific is that he has a bully pulpit on the blogosphere — and, moreover, one that, to those unaware of modern media’s ideology collapse, seems respectable.

Sullivan is a mental slob and a moral deviant (something entirely separate from his sexual identity, which is his own business).  In a free nation, he’s allowed to be a pea brain and antisemite, but it says something just awful about America that he has a large and loyal following.

And if we want to take horrific and multiply it by appalling, what’s really astounding and depressing is that, as I know from my Leftward friends, many of his most devout followers are Jews.  Or rather, I should say that, genetically they’re Jewish and they observe the High Holy Days, but their sensibilities are shaped entirely by Leftist politics.  Like all useful idiots and appeasers, they’re pretty sure the crocodile, once it starts its attack, will pass them by for someone who forgot to grovel and pander as well as they did.

Oh, wait!  I’ve thought of something even more dreadful than horrific multiplied by appalling:  It’s not just that Andrew Sullivan approves of Chuck Hagel.  It’s that our president — reelected by 52% of the American population — does too.  Rather than leading the call for surrender of arms, smart Jews should be stockpiling.