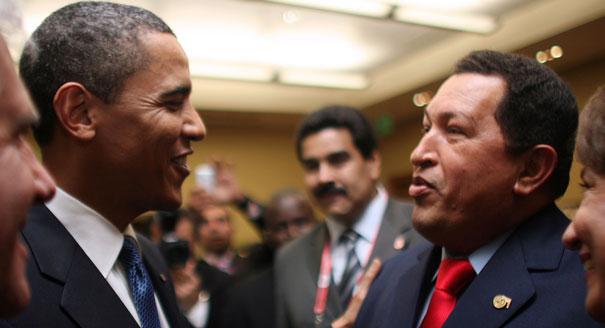 Hugo Chavez, the former tank commander who turned the Venezuelan presidency into a lifetime post from which he could spew his anti-American, antisemitic venom, all the while sending Venezuelan’s oil supply to the world’s bad actors, died today after a long battle with cancer. It remains to be seen whether the Venezuelan people will end up saddled with someone even worse or whether his death will end the country’s unpleasant socialist interlude.

Chavez was born in 1954 in Sabaneta, Venezuela, the second of six sons. His father was a schoolteacher who was closely involved with Copei, the conservative Christian Democratic Party. Chavez’s mother was the more powerful figure in this poverty-stricken family, and she had a very fraught, unhappy relationship with her son. Eventually, Chavez and his older brother ended up living with their grandmother, who filled his head with stories about a distant ancestor who was the Robin Hood of the poor Barinas region in which Chavez grew up.

Another childhood inspiration for Chavez was Simon Bolivar, the 19th century patriot who helped liberate six Latin America countries, including Venezuela, from Spain. Indeed, when Chavez first became president, he changed Venezuela’s official name to the Bolivarian Republic of Venezuela.

As a child, Chavez was a gifted baseball player, and his youthful dream to play in America. In fact, he joined the Venezuelan military because an army recruiter told him it was a good pathway to Major League Baseball.

The military suited Chavez. In 1975, he graduated near the top of his class, entering a tank division. It was while he was in the army that the oil boom that had brought so much money to Venezuela went bust. Seizing upon the resulting civilian discontent, would-be revolutionaries infiltrated the Venezuelan military in the hopes of fomenting a Leftist military coup.

Chavez, despite his father’s conservative politics, had swung to the Left. By 1983, he was forming secret cell’s with like-minded military officers. These officers were dismayed when, in 1989, then-president Carlos Andres Perez enacted pro-market reforms. These reforms, however, were followed by a fuel price increase that caused wide-spread looting in Caracas. Within the army, many, including Chavez, believed that Venezuela could be saved only with strong, preferably military, leadership.

In 1989, Chavez exploded onto the national stage when he led army units in an attack on the Presidential palace. The attack failed, leading to Mr. Chavez’s first television appearance. He went on the air to persuade fellow rebels to surrender. His was a “no apologies” approach, as he confidently assured the viewing public that his coup had failed “for now.”

In the wake of the coup attempt, Chavez was sent to prison, but his sentence was commuted in 1994. Upon his release, Venezuelans craving a strong alternative to Venezuela’s famously corrupt government, flocked to him. Chavez, meanwhile, looked to Castro for guidance, while Castro looked to Chavez as a useful puppet to have on mainland Latin America.

When Chavez ran for president in 1998, he won by a landslide. One of his first acts was to call for a constitutional election so that he could run for a second term — and run he did, with a second election win.

Once in power, Chavez doubled down on class warfare and on efforts to expand government into every region of life in Venezuela. Middle-class Venezuelans were sufficiently worried that, by April 2002, they staged a massive demonstration against him. The army refused to shoot the rioters, forcing Chavez to resign. His resignation lasted a mere 48 hours before his supporters from the barrios staged a counter-demonstration that swept him right back into office.

Having resumed power, Chavez purged military ranks and went about breaking the back of his country’s other power center — oil. He succeeded in doing so, but at terrible cost. After he fired 19,000 oil company employees, Venezuela was never again able to return to its former peak oil production. Rising oil prices over the last few years, however, helped offset the decrease in production and kept money flowing into Chavez’s pockets. With this cash flow, Chavez was able to get returned to office two more times. He died during his fourth term in office.

On the national stage, Chavez became a thorn in the flesh of freedom-loving people at home and abroad. At home, he achieved a half-socialist, half-fascist rule, insofar as he nationalized some businesses, while leaving others in private hands but under government control. His policies resulted in devastating inflation and huge foreign debt. Eventually, the only profit center in the country was oil (and, as noted above, Chavez’s policies meant less production of this vital asset).

Chavez’s greatest achievement, and the one that saw him become so popular despite the damage he caused to the economy and civil liberties, was to enfranchise thousands of Venezuela’s poorest, while at the same providing them socialized education, health care, and welfare programs. Typically for such programs, while they looked good, and enticed voters, the net effect was negligible. Crime rose and individual wealth fell. The poor had slightly more education and health care, but much less money and more crime-ridden communities.

Chavez’s (not Venezuela’s, but Chavez’s) two greatest enemies were America and the Jews. He enjoyed hobnobbing on the world stage with some of the world’s worst actors (Libya’s Gadhafi, Iran’s Ahmadinejad, Cuba’s Castro, and Syria’s Assad) in significant part because he felt it gave him a power base from which to challenge the United States’ influence over Latin America. He also tried to create a strong Leftist coalition within Latin America itself, by strengthening ties with Cuba, Bolivia, Ecuador, and Nicaragua. One U.S. diplomat called this Chavez’s “Axis of Annoyance.”

Once Chavez realized that there was no medicine in Cuba or Brazil that would cure, or even slow, his cancer, he made it clear that he intended Nicolas Maduro to become his political heir. In the upcoming election, Maduro will almost certainly face off against opposition governor Henrique Capriles, who lost to Chavez in last October’s president’s election, but did manage to hold on to his governor’s seat. It remains to be seen whether Chavez’s popularity will rub off on Madura, or if Capriles will be able to break this regime’s hold on the office.