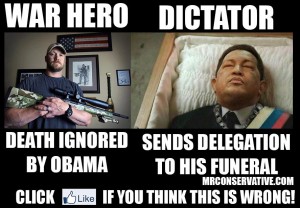 It’s been more than a month since military hero Chris Kyle died, and President Obama has yet to say a word about Kyle and his service to our country.  It’s been two days since Venezuelan Hugo Chavez died, and the President has already made arrangements to send a three-man delegation to his funeral.

The former Navy-SEAL was an extraordinarily heroic sniper who recorded the highest number of kill shots in American history.  He claimed he was just lucky (there were so many enemies around him that it was like shooting fish in a barrel), but it’s obvious that luck was only a part of it.  He was naturally talented, well-trained, meticulously prepared, and extremely courageous.  Although he had nothing good to say about the barbarians he fought, Kyle never had a bad word to say in public about this country or its leaders.  He truly and proudly loved America.

Hugo Chavez was a “socialist” despot who wrecked Venezuela’s economy, not for the people’s benefit, but to enrich himself.  Current estimates are that he squirreled away about $2 billion dollars of the Venezuelan people’s money in his own bank accounts.  His favorite people were the world’s worst dictators, whether in Cuba, the Middle East, or Russia, and he tried hard to help these regimes out with the oil he robbed from his people.  He aggressively supported Latin American drug and Leftist terrorist groups, and he practiced the usual dictator’s trick of blaming the Jews (who are a tiny minority in Venezuela) for the economic troubles he created.

And of course, like any despot, Chavez hated America.  In a memorable 2006 appearance at the U.N., Chavez said of President George Bush that “The devil came here yesterday.  It still smells of sulfur today.” President Bush wasn’t his only target.  In the same speech, he told the world that America and President Bush promoted “a false democracy of the elite” and a “democracy of bombs.”

When America-hater Hugo Chavez died, Obama issued a wordy statement that said nothing about the fact that Venezuela and the world are large are better off without the dangerous despot who desperately wanted to be a big player in the world’s Axis of Evil:

When American hero Chris Kyle was mourned at his memorial service, Obama did not attend, he did not send a taped message (or even a telegram), and he did not send an official White House representative.

Now that America-hater Hugo Chavez has finally died, Obama has arranged for an impressive delegation to attend the official funeral in Caracas.  According to the Washington Times:

The Obama administration has dispatched an official delegation to Caracas to attend Friday’s funeral for deceased Venezuelan President Hugo Chavez.

In addition to James Derham, who presently serves as Charge d’Affaires at the U.S. Embassy in the Venezuelan capital, the State Department said Thursday that the delegation to the socialist revolutionary’s funeral will include U.S. Rep. Gregory Meeks, New York Democrat, and former U.S. Rep. William Delahunt, Massachusetts Democrat.

Not to put too fine a point on things, it is disgusting that President Obama (who is the American military’s Commander in Chief) completely ignored an American military hero’s death; and now, just a month later, pulls out the stops when an anti-American, pro-terrorist, socialist robber baron dies.  If you need a snapshot of the Obama administration’s values, this is it.