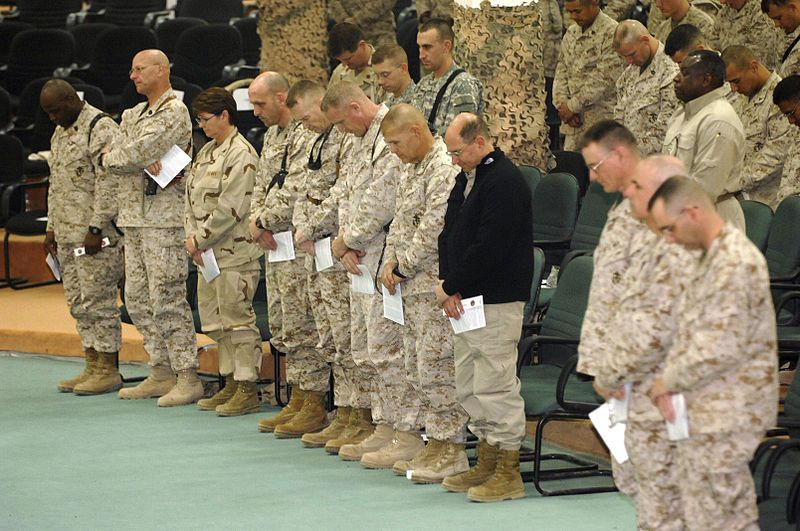 In connection with my post about the Left’s fierce hatred for Christianity (which burns bright alongside its antisemitism and pathological love and respect for Islam), I wrote about the Pentagon’s decision to partner with Michael Weinstein, a rabid anti-Christian who’s set his sights on the military. The next phase in this secularist crusade is the Pentagon’s announcement that, why yes, we will be court martialing proselytizing.

Of course, everything’s vague.  Are you proselytizing if you say a personal prayer?  If you ask a subordinate what his faith is?  If you’re a military chaplain whose responsibility is to minister to people souls?  What about if you hold an after hours Bible study group in your home?

The one thing we know for certain is that if you scream Allahu Akbar and kill 12 or 13 people, and wound more than twice that many, it has nothing to do with religion.

You can sign a petition here challenging the Pentagon’s decision to partner with a rabid anti-Christianist.

And here’s the post I wrote for Mr. Conservative about today’s news:

The Pentagon was unmoved by religious extremism in the military when Major Nidal Hassan, a devout Muslim in full Allahu Akbar mode killed 13 people at Fort Hood and wounded 32 others. That, we were assured, had nothing to do with religion. Based upon a relentless Leftist drumbeat, however, one directed at Christian “monsters” in the military who actually believe in God and want to share the gospel, the Pentagon has released an official statement affirming that it will court martial “proselytization.”

This official statement followed close on the heels of a Breitbart report breaking the news that the Pentagon has taken on as a consultant Michael “Mikey” Weinstein, the fanatically anti-Christian founder of the misnamed Military Religious Freedom Foundation. The Pentagon and Weinstein are partnering to create court-martial procedures aimed at punishing Christians.

Weinstein’s concerns about alleged Christian proselytizing in the military don’t sound either temperate or rational. Mikey says that Christians who serve in the American military are “well-funded gangs of fundamentalist Christian monsters who terrorize their fellow Americans by forcing their weaponized and twisted version of Christianity upon their helpless subordinates in our nation’s armed forces.” They’re also “evil, fundamentalist Christian creatures” and “bandits” who “coagulate their stenchful substances.” Go on, Mikey. Don’t hold back. Tell us what you really think.

Mikey has been pushing his anti-Christian agenda hard, everywhere. Here you can see him selling his stuff to Progressives at the Huffington Post who, despite bandying about the phrase “First Amendment,” seem incapable of understanding that the Founders didn’t ban religion, they just banned an official federal religion:

We all acknowledge that any officer who uses his power in the military to coerce those serving under him to do something for non-military reasons deserves to be disciplined, and that’s true whether the officer uses that power for sexual harassment, fraud, theft, or forced conversions. With Mikey on board, though, it begins to seem possible that, if a Christian officer even mentions faith or God, a subordinate with a bone to pick can destroy his career. As Breitbart says:

So President Barack Obama’s civilian appointees who lead the Pentagon are confirming that the military will make it a crime–possibly resulting in imprisonment–for those in uniform to share their faith. This would include chaplains—military officers who are ordained clergymen of their faith (mostly Christian pastors or priests, or Jewish rabbis)–whose duty since the founding of the U.S. military under George Washington is to teach their faith and minister to the spiritual needs of troops who come to them for counsel, instruction, or comfort.

This regulation would severely limit expressions of faith in the military, even on a one-to-one basis between close friends. It could also effectively abolish the position of chaplain in the military, as it would not allow chaplains (or any service members, for that matter), to say anything about their faith that others say led them to think they were being encouraged to make faith part of their life. It’s difficult to imagine how a member of the clergy could give spiritual counseling without saying anything that might be perceived in that fashion.

This writer is Jewish. When she was a young and stupid Leftist, she took offense when Christians spoke about their faith to her. Since then, however, she’s grown up and learned that there’s a gaping chasm separating Christians who, through words only, want to share with her the benefits of their faith, in this life and the next, and practitioners of other religions who believe that the best and only way to spread their faith is through fire and sword. We’re not converting any time soon, but we appreciate the generosity of spirit our Christian friends show, as well as their graciousness when we (politely) refuse their efforts. We’re much less impressed by the “Allahu Akbar” school of conversion.

Even uber-liberal Bill Maher (who’s nominally Jewish and, like a good Leftist, actually hostile to all religions but for worship of the State) knows that it’s “liberal bullshit” to pretend that Christians are a threat to America’s safety and well-being.