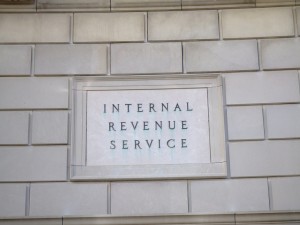 When it comes to the IRS’s ongoing, repressive behavior against conservative groups, you’re likely to hear different verdicts:  The hard Left says, of course, that this is a molehill that the Republicans are scandalously trying to turn into a scandal.  (The New York Times perfectly exemplifies this line of thinking.)  Others on the Left admit incompetence, but refuse to assign moral blame.  Conservatives are willing to assign moral blame but think that no one really cares.

I believe that everyone should care because what we’re seeing now is a new type of scandal in American history, and the biggest crime a sitting administration has ever committed against the American people.  I wrote about it at Mr. Conservative, although the headline there focuses on the IRS’s probing into people’s prayers.  (Thinking about that, its worth remembering that Queen Elizabeth I, who ruled in an age when church and state were one, refused to “make windows into men’s souls.”  The IRS is not so doctrinally picky.)

Anyway, here’s the post I wrote for Mr. Conservative:

There’s been a lot of debate swirling amongst the pundits lately. Is the Watergate cover-up worse than the Benghazi cover-up or vice versa? Is the only scandal that matters the Justice Department’s decision to tap Associated Press phones, because that’s the only one that the media will care about? What did Obama know and when did he know it?

Ignore all that. The absolute worst scandal that’s emerged lately, and the worst administration scandal in American history is the IRS scandal. Why? Because you, the People, became the targets of a comprehensive federal government effort to stifle dissent, one made using the government’s overwhelming and disproportionate policing and taxing powers.

The IRS scandal, by contrast, is a direct attack on the American people. Right now, Progressives throughout America are pretending that this scandal doesn’t matter: “Obama wasn’t involved.” “Tea Partiers had it coming because they’re all corrupt.” “Obama would have won the election anyway.” “It was just a coincidence that the only groups that had their applications scrutinized, sometimes for years, were politically conservative. It means nothing that, when one group changed its name to sound Progressive, its application was approved in only three weeks.” “This is just a bureaucratic snafu.” “It’s a few rogue agents in Ohio.”

Those who offer these excuses are either morally flawed themselves or delusional idiots. Pastor Martin Niemoller, who once supported the Nazi party, finally and famously figured things out after World War II:

First they came for the communists,
and I didn’t speak out because I wasn’t a communist.

Then they came for the socialists,
and I didn’t speak out because I wasn’t a socialist.

Then they came for the Jews,
and I didn’t speak out because I wasn’t a Jew.

Then they came for the Catholics,
and I didn’t speak out because I wasn’t a Catholic.

Then they came for me,
and there was no one left to speak for me.

Once a government gets the bit between its teeth and starts targeting special interest groups, that is the end of freedom, not just for those first groups targeted, but for everyone.

Okay, that was the throat-clearing. Now it’s time to add the latest chapter in the long list of examples showing that the IRS engaged in a politically motivated witch-hunt against people who don’t toe the Progressive/Democrat party line:

The Thomas More Society (a Catholic organization) says that an IRS office in California ordered a group called “Christian Voices for Life of Fort Bend County, Texas” to detail the meaning and content of the prayers they offered. That was not an isolated event. IRS agents demanded the same information from “Coalition of Life of Iowa,” which was required to explain what went on at the group’s prayer meetings.

When Rep. Aaron Schock (R., Ill.) asked outgoing IRS commissioner Steven Miller whether these were appropriate questions, Miller didn’t even have the courage to say “no.” Instead, he said meaninglessly that “It pains me to say I can’t speak to that one either.”

Here’s thumbnail sketch of just a few of the other politically-motivated attacks the IRS has made against American citizens. We can expect many more revelations to come:

1. The IRS official who over saw the agency’s effort to stifle political dissent is now in charge of enforcing ObamaCare, which will account for up to one-sixth of the American economy.

3. The IRS (which will police ObamaCare) stole 10 million medical records, including the records for all California judges.

4. The IRS blocked applications for or otherwise harassed almost 500 conservative non-profit groups – and there’s every reason to believe that this number will continue to rise.

5. The IRS insisted that, for a pro-Life group to obtain tax-exempt status, it would have to promote abortion.

6. The IRS has been mining Facebook for private data about people who dissent from Obama’s party line.

7. The IRS tried to force a conservative non-profit education group to turn over the names of students (mostly minors) who benefited from its services.

As for those who say that the whole IRS affair becomes irrelevant if no one can prove that Obama is not directly involved, that’s completely wrong. Of course, if the president was involved, it shows that he is the most corrupt, tyrannical leader in American history, and that every branch of the executive division in our government has been tainted and must be cleaned out. And as far as Obama is concerned, if he wasn’t involved, he is a man too incompetent and weak to hold the job of national chief executive.

But think about what it means if Obama wasn’t involved, and the IRS, an agency that has the power to destroy every person in America, did all of this on its own initiative. What we’re seeing in that case is the fall-out of a complete Leftist takeover of American institutions. We will have become a tyranny by bureaucracy (in no small part due to the fact that federal agencies are heavily unionized, and always with a Leftist slant), with the entire federal government irredeemably corrupt.

Here’s one last thought for you about an American president who, wittingly or unwittingly, presided over the single worst scandal in American history:

On May 5, at Ohio State University (the same state in which the IRS scandal was headquartered), Obama gave a speech that was viewed then as yet another in the endless list of examples showing Obama painting his political opponents as loony paranoids:

Unfortunately, you’ve grown up hearing voices that incessantly warn of government as nothing more than some separate, sinister entity that’s at the root of all our problems; some of these same voices also doing their best to gum up the works. They’ll warn that tyranny is always lurking just around the corner. You should reject these voices. Because what they suggest is that our brave and creative and unique experiment in self-rule is somehow just a sham with which we can’t be trusted.

Reading those same words now, it’s clear that, like the rattlesnake’s warning, Obama was previewing the reality of a Leftist government’s total control over the people who have naively consigned themselves to its care.