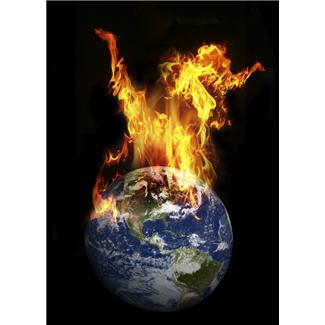 You all know that I do not believe in anthropogenic global warming (“AGW”).  I believe in climate change, because the earth’s climate has always changed, since its first moment of existence.  I believe that humans do control pollution and that we have an obligation to ourselves and to the other life forms on earth to limit pollution as much as is reasonably possible.  It is unreasonable for us to go back to a pre-industrial world (or, if the climate changers had their way, to a pre-human world).

Most of us have thought that, if the earth is indeed warming (which it actually hasn’t done for more than a decade) than that warming came about because of solar activity.  We didn’t have hard proof, but we had a good working hypothesis, which conformed well to the actual evidence — and certainly worked a whole lot better than all of the AGW theories put together.

Now, though, there’s a new theory in town.  According to a new study in the International Journal of Modern Physics B, changes in the earth’s temperature correlate perfectly to chlorofluorcarbons in the earth’s atmosphere.

If you’re over 40, you probably remember chlorofluorcarbons and the great ozone layer scare.  Scientists announced that CFCs were destroying the earth’s ozone layer.  Until then, most products that came in a spray can had CFC as a propellant.  I don’t remember whether CFCs were banned or if manufacturers yielded to market pressure.  All I know is that they went away.

The University of Waterloo, which authored the study, contends that CFC’s, not CO2, track warming precisely:

“Conventional thinking says that the emission of human-made non-CFC gases such as carbon dioxide has mainly contributed to global warming. But we have observed data going back to the Industrial Revolution that convincingly shows that conventional understanding is wrong,” said Qing-Bin Lu, a professor of physics and astronomy, biology and chemistry in Waterloo’s Faculty of Science. “In fact, the data shows that CFCs conspiring with cosmic rays caused both the polar ozone hole and global warming.”

“Most conventional theories expect that global temperatures will continue to increase as CO2 levels continue to rise, as they have done since 1850. What’s striking is that since 2002, global temperatures have actually declined – matching a decline in CFCs in the atmosphere,” Professor Lu said. “My calculations of CFC greenhouse effect show that there was global warming by about 0.6 °C from 1950 to 2002, but the earth has actually cooled since 2002. The cooling trend is set to continue for the next 50-70 years as the amount of CFCs in the atmosphere continues to decline.”

“It was generally accepted for more than two decades that the Earth’s ozone layer was depleted by the sun’s ultraviolet light-induced destruction of CFCs in the atmosphere,” he said. “But in contrast, CRE theory says cosmic rays – energy particles originating in space – play the dominant role in breaking down ozone-depleting molecules and then ozone.”

“The climate in the Antarctic stratosphere has been completely controlled by CFCs and cosmic rays, with no CO2 impact. The change in global surface temperature after the removal of the solar effect has shown zero correlation with CO2 but a nearly perfect linear correlation with CFCs – a correlation coefficient as high as 0.97.”

Data recorded from 1850 to 1970, before any significant CFC emissions, show that CO2 levels increased significantly as a result of the Industrial Revolution, but the global temperature, excluding the solar effect, kept nearly constant. The conventional warming model of CO2, suggests the temperatures should have risen by 0.6°C over the same period, similar to the period of 1970-2002.

I understand the general principle, which is that CFCs, not CO2, drive temperature changes.  I’m being stupid, though, insofar as I can’t understand whether the study says that humans are responsible for the CFCs (either currently or in the past) or if the the CFCs occur naturally because of solar activity.  Can someone clue me in on this one?

It seems to me that, if CFCs occur naturally, the entire AGW hysteria is instantly dead in the water.  We can (and, to a reasonable extent, should) control pollution.  We cannot, however, control global warming or any other type of climate change.  In other words, earth will survive if we don’t give up the incredible benefits to humanity that have come with fossil fuel.

If I’m wrong, however, and the study says humans are responsible for these CFCs, where does that leave the climate change movement?  Do they still have a sledgehammer with which to bludgeon capitalism and, especially, America?  Or was the human-generated CFC damage already done in the past and we’re just waiting for repair?

To all those out there more intelligent than I am, please explain.

UPDATE: Crowd sourcing is a great way to get information, especially because I know and trust my crowd. The remarkably well-informed, amazingly smart Zombie was kind enough to stop by and leave a solid, comprehensible explanation about CFC’s, what the future holds, and how it will drive the Left crazy:

Here’s the explanation you requested:

CFCs, as far as I know, are entirely artificial; there may have been trace naturally occurring amounts of them, but if so they were insignificant. CFCs were invented in the 1890s and found to be fantastically useful as fire suppressants, refrigerants, and propellants. All industrialized nations used them extensively, especially starting after WWII when CFCs became the standard ingredient in most refrigerators, air conditioners, fire extinguishers, and aerosol cans.

But in the ’70s and ’80s is was discovered and conclusively confirmed that CFCs had destroyed the southern polar ozone layer, and so there was an international treaty banning their production signed in 1989.
Since then, no nation had legitimately produced CFCs, and safer replacement chemicals have been found.

HOWEVER, the treaty allows for the fact that there are millions — hundreds of millions, more likely — of existing refrigerators and air conditioners already installed around the world which were made before 1989 and thus still contain CFCs. There was no reasonable way for everyone in the world to have their existing appliances replaced for free. So the treaty assumes that CFC release will not stop immediately, but slowly decrease over time as the existing refrigeration units break down and are junked and their CFCs escape into the atmosphere. The amount of CFCs is definitely and irrevocably on the decline, but it will still be decades before the existing CFCs in existing appliances expire, release their contents, and are replaced by modern non-CFC appliances.

(The problem, you see, is that while aerosol cans release their CFCs soon after purchase, the CFCs in appliances remain sealed and non-polluting while still functioning, and they only release the pollutant in one big plotz at their end of their functional lives, when they break and are junked and the refrigerant seal is broken. Well-made appliances can last for decades and decades, so even 30 years from now, half a century after CFC manufacture was banned, there will still be some release from junked old refrigerators.)

Another problem is the illegal manufacture of CFCs, in third-world countries, rogue states, and communist regimes, which smuggle them and use them to this day (because they’re cheap to make and quite useful as chemicals). We in the civilized industrial West try to crack down, but it’s difficult.

Anyway, the CFC theory of global warming has much stronger footing than the CO2 theory just on the face of it, because we have already proven beyond doubt that CFCs destroy the ozone layer (which is why there was almost no argument or fuss when their ban was proposed back in ’89), and it’s therefore not a stretch that their effects would extend to other atmospheric aspects as well.

Contemporary Global Warming Hysterics will hate and reject this new theory, because CFCs have already been banned completely, and thus there’s no way to use this new info to use as a sledgehammer to destroy the Western world’s economy (as the anti-carbon mania is being used).