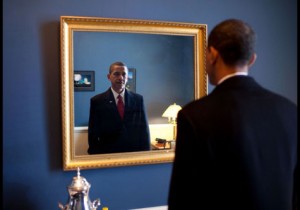 Citizen Obama used to oppose government spying.  President Obama, of course, has enlarged the NSA’s scope dramatically on his watch. President Obama was therefore very upset when Citizen Edward Snowden decided to reveal just how much our cool, hip president is spying on his own people.  (Incidentally, I’m of two minds about Snowden.  It was definitely treason to reveal America’s spying information as to foreign governments.  It was useful, though, and possibly a 4th Amendment service, to reveal to Americans that they too are the subjects of constant surveillance.  But back to Obama….)

In a New York Times article about Obama’s reaction to Snowden comes this priceless line:

Mr. Obama was angry at the revelations, privately excoriating Mr. Snowden as a self-important narcissist who had not thought through the consequences of his actions.

If you didn’t find that statement as priceless as I did, it’s because you haven’t been operating for years on the same assumption that I have; namely, that Obama is a malignant, self-important narcissist, whose guiding principle is his own ego.