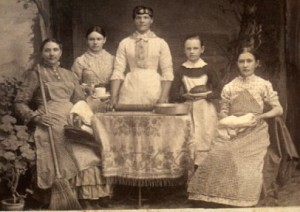 When I was at UC Berkeley, I had two good professors from whom I actually learned something.  One of them was Sheldon Rothblatt, who then taught a class covering England from the Industrial Revolution to the dawn of World War I.  He was a delightful teacher, able to infuse life and color into what would have been, in less skilled hands, a drab recital of capitalist oppression and Marxist struggles.

Looking back, I realize that Professor Rothblatt, unlike the usual Marxist cohort in Cal’s history department, viewed people as individuals with wants and desires, rather than as mere cogs in an endless struggle between oppressed masses and oppressive upper classes.  Prof. Rothblatt’s recognition that individuals count may go a long way to explaining the answer he gave when someone asked why the Industrial Revolution was petering out in England at the beginning of the 20th Century while, in America, it kept roaring on.

If I remember correctly, Prof. Rothblatt said that the end of the Industrial Revolution in England lay with the working classes.  The problem wasn’t that they were too oppressed.  Instead, between the downward pressure from the class system (“an Englishman’s way of speaking absolutely classifies him“), and the rising level of (comparative) luxury brought about by the Industrial Revolution, working-class Englishmen simply stopped trying very hard.  They knew that, no matter the effort they put in, they wouldn’t be able to break through the class ceiling.  Additionally, provided that they weren’t living in abysmal poverty, they had more creature comforts than they could ever have imagined.  So why work?

In America at the beginning of the 20th Century, things were different.  The working classes knew that, with effort, they could rise up and their children could rise up even more.  Heck, John D. Rockefeller went from a very shabby childhood to being one of the richest men in the world.  Andrew Carnegie, the son of a Scottish weaver, did the same.  While most wouldn’t reach those rarefied heights, there was no doubt that, with hard work, geographic mobility, and America’s open class system, a man or a woman, or that man’s or woman’s descendents, could realistically attain middle class or even wealthy status.  In addition, as the original poor gained economically because of the Industrial Revolution, thereby leaving the working class behind, there was a constant influx of (legal) immigrants to provide fresh, hope-filled labor for the factory floor.  Yes, many people fell by the wayside, but even more people ascended American society’s ranks — and that was itself an incentive for continued effort.

America has changed dramatically since then in three very significant ways.  First, we’ve lost our geographic mobility.  I know that sounds funny in a day and age of trains, planes, and automobiles, but it’s true.  We are heavily weighed down by both tangible and intangible assets.  If my husband were to lose his job (God forbid!), and if there were no employment prospects here, moving to find work would be reasonable.  Nevertheless, we would find it incredibly difficult to move.  Every room in our house is crammed with stuff that would have to be sorted, sold, packed, and transported and then, at the other end, we’d have to unpack, re-sort, and probably sell some more.  Unlike people in days of old, who might have had only a few clothes, a Bible, and a cook pot, we have four computers (one for each of us), hundreds of clothes (between the four of us), thousands of books (mostly mine), televisions, kitchen gadgets, appliances, dishes and cookware, cleaning supplies, furniture (too much, since my husband can’t bear to part with old when we buy new), family photographs, art work, knick-knacks — and that’s probably only a partial inventory of the tangible clutter that is a modern life.

A move also requires transporting our intangibles.  We have to engage in the tiresome task of changing our bank accounts.  In the old days, you’d just deposit or withdraw money.  Now the paperwork of setting up a new account to comply with the bank’s requirements, the state’s requirements, and the fed’s requirements can take hours.  We have to sever all our ties to cable companies, phone companies, and utilities, and then recreate new ties at our destination.  We need to change our address with credit card companies and make sure that Amazon ships more clutter to our new address not our old.  As I remember from my last move, it was almost a year before I’d managed to transfer every bit of data from my old address to my new one.

Second, illegal immigration means that our new crop of workers remain as perpetual bottom feeders, stultifying America’s former dynamic of moving from the bottom of the heap up to the middle or beyond.  We give the illegals marginal jobs, welfare, and food stamps, but they are, as their community organizers like to say, stuck in the shadows, something that severely limits upward mobility.  The appropriate course of action for our nation to take, of course, isn’t to grant amnesty, which is an invitation to yet another large batch of economically stultifying illegal shadow workers.  It is, instead, to shut down our borders, deny welfare to illegal immigrants and education to their children, put pressure on companies that employ them, and watch them self-deport.  Meanwhile, if we do indeed need all these workers, we should dramatically boost our legal immigrant quota and enable more people to come here freely and work openly.

Third, and most significantly, we’ve now got Obamacare, which acts as a disincentive to hard work.  John Podhoretz neatly summarizes the key points of the CBO’s most recent report about Obamacare’s effect on employment:

If that’s not startling enough [that the number of uninsured will stay the same or even rise, there’s also the telling projection about ObamaCare’s impact on employment — “a decline in the number of full-time-equivalent workers of about 2.0 million in 2017, rising to about 2.5 million in 2024.”

Overall employment will rise, the report says, but not steady, secure, long-term assured employment. The possibility of securing government-provided health-care without employment will give people a new incentive to avoid it. “The estimated reduction stems almost entirely from a net decline in the amount of labor that workers choose to supply,” the report says.

Indeed, overall, between 2017 and 2024, the actual amount of work done in this country will decline by as much as 2 percent.

How come? Because of perverse incentives ObamaCare provides in the form of subsidies to some and higher taxes to others.

First, the report says Americans will “choose to supply less labor — given the new taxes and other incentives they will face and the financial benefits some will receive.”

Here’s why: Poor people get certain subsidies, which disappear once a worker achieves a certain level of compensation. So it may be better to work less, or not work at all, rather than reach that higher pay level, because the pay increase won’t offset the loss of the subsidy.

For those at the bottom economically who once had dreams of “movin’ on up,” Obama has placed insuperable hurdles in their way:  any incremental increase in wages from working longer hours or at a more demanding (but better paying) job will be offset by a dramatic increase in healthcare costs, resulting in either more work for less money or more work for the same money — neither of which is an appealing option.  Only those workers who are able to make the unlikely leap from poor to rich overnight will be able to bypass this barrier without suffering.

What all this means is that the modern American worker is now situated in the same way as the late 19th century English worker:  Where the English worker knew that the class barrier meant that harder work wouldn’t see him rewarded for his effort, the modern American knows that the Obamacare barrier means that harder work will not see him rewarded for his effort.  Where the English worker was frozen geographically because there were no better alternatives elsewhere (that class thing again), the American worker is likewise frozen, both because Obamacare’s perverse incentives apply everywhere and because moving is just too gosh darn difficult.

Lastly, just as that long-ago English worker had reached a level of comfort that made him willing to accept class and geographic limitations, so too has the American worker reached a fairly comfortable dead end.  He’s certainly not living lavishly.  However, thanks to Obamacare, unemployment, food stamps, and welfare, he’s getting an endless vacation.  He may not be basking on a Tahitian beach, taking in Broadway shows, or touring Europe’s cities, but he’s surfing the internet, talking to friends on his smart phone, and getting high scores on Call of Duty, all while receiving a bi-monthly check from both state and federal governments.  And when this sedentary lifestyle starts to have consequences — everything from carpal tunnel syndrome to life-threatening blood clots — he knows he’ll get free medical care that’s every bit as good as the Cuban medical care that multi-millionaire communist Michael Moore has raved about.

Some of you might be shaking your heads and saying “But no one would want to live that way.  It’s a squalid, marginal lifestyle.”  Well, as I’ve written here before, there are a lot of people who think it a fine way to live.  At the very least, it sure beats working.  For these people, the journey from a poorly paid job to permanent welfare is a much easier trip, both practically and economically, than working harder to make more money, only to see the extra wages vanish into the endless maw that is Obamacare.

While walking the dogs this morning, I listened to Mark Steyn, who was guest-hosting for Rush Limbaugh.  He pointed out that the real sin of welfare isn’t wasted money but is, instead, wasted humans.  As Betty Friedan (of all people) said in a talk I heard 20 or so years ago, there are three ingredients to a quality old age:  strong family ties, strong community ties, and work (i.e., a reason to get home in the morning).  Much as we humans like to do nothing, the fact is that the Victorians were right when they sagely opined that “idle hands are the Devil’s playground.”  Given too much free time, which is what’s about to happen to vast numbers of Americans thanks to Obamacare’s negative incentives, idle hands create tremendous societal wounds as people, rendered meaningless, engaging in destructive or self-destructive behavior.

Many people looking back at the early 20th Century think that World War I and World War II (followed by the loss of India) destroyed England.  They didn’t.  Those earthshaking events were actually the exclamation points on a society that had already run dry by 1914.  Once a society stops striving, it starts dying.  It happened there and, unless we can put the brakes on the slippery slope we’re now sliding down, it will happen here.