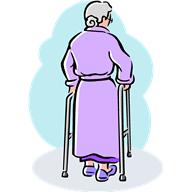 My mother called me yesterday, her voice shaking with tears.  “I’m in such terrible pain.  I can’t stand it.  I need to see the doctor.”

Mom’s answer made me realize I’d been played.  In a suddenly ordinary voice, she replied, “I already called and he can’t see me today, but he can see me tomorrow.  What time works for you?”

As someone suffering from a few of my own rickety joints, I have no doubt that Mom’s in significant pain and that a codeine shot will help out.  For that reason, I always take her to the orthopedist whenever she asks.  It’s just that I rather resent that she felt theatrics were necessary to get me to “yes.”

These trembling theatrics are what my Mom has always done.  That’s why, even though she’s a nonagenarian, they still bug me.  I can’t slough the tactic off by saying, “At her age, between labile emotions and a sense of helplessness engendered by age, of course she’ll use emotional manipulation.”  The reality is that this is just her way.

When I was growing up, we had a family friend who was wonderfully dramatic.  She easily turned something as mundane as her morning trip to the grocery store into an epic, and always amusing, adventure.  Because she was dramatic, my sister and I called her a drama queen.  What we didn’t realize was that her drama was to entertain, not to manipulate.  Meanwhile, back at home, our mother was enacting quiet little dramas about everything, all with an eye to achieving her ends.  It was very effective but, as you can see, decades later, it still irks me.

I love my mom.  She had a rotten life in many ways and developed survival skills to deal with a broken home, frequent relocations, Japanese concentration camp, the Israeli War of Independence, a frustrating marriage, immigration to a country she basically dislikes, etc.  I respect that, despite those troubles, she spent her entire adult life as a highly functional human being who worked hard, had a wide circle of friends, lived life vigorously, and parented with love and commitment.

Despite this gripe, believe me when I say that I’m not making a big deal of yesterday’s phone call beyond whining a bit here.  I’m also using this self-indulgent whine to lead to a larger point.  I firmly believe that, at a certain age, we have to let go of resentments — or at least, as here, turn them into occasional grumbles, rather than life-controlling forces.

More importantly, I believe that, to the extent we don’t like people’s behaviors, it behooves us not to emulate them.  Or, as Hillel said, “That which is despicable to you, do not do to your fellow.  This is the whole Torah; the rest is commentary.  Go and study it.”  Thus, while I’m sure I have uncountable failings as a mother, the one sin I never commit is using emotional manipulation on my children.

I routinely try to remind my children about the Hillel principle.  It’s not unusual for them to respond to a scolding by saying, “You and/or Daddy and/or my sibling do it too.”  I then ask, “Do you like it when I (or your Daddy or sibling) do that?”  The answer, of course, is always “No.”  Which leads to the obvious follow-up question:  “Why in the world would you willingly emulate behavior you think is bad?”  I then always add, “Now that you’re teens, you’re old enough to stop just being reactive and, instead, to start making decisions about the type of person you want to be.”

It’s because they are teens, that my kids don’t instantly modify their behavior in response to my little Socratic dialogues.  Nevertheless, I want to plant this seed in their mind:  “You are responsible for choosing who and what you want to be in this life.  If you admire behaviors, copy them; if you dislike behaviors, avoid them.  You cannot in good conscience willingly engage in behaviors you believe are bad simply because ‘other people do them too.'”

Here’s an irony.  Just as I finished proofreading the above post, my Mom called.  “I have no pain today, so I guess the doctor won’t see me, right?”  I told her I was so happy she was feeling better.  While she doesn’t miss the pain, I sensed that she regretted that she won’t get to go to a doctor today.  She does love her doctors — and they, bless their hearts, take wonderful care of her.