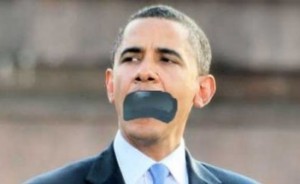 From the time he hit the campaign trail in 2007, Barack Obama made it plain that he considered America to be too big for her britches when it comes to international matters.  Looking at imperfect nations, you could see him mentally scolding America — “Haven’t you done enough already?” — for bringing so much pain and suffering to the rest of the world.

In the years since his election, Obama has reacted strongly to only three international issues:  climate change, gay rights, and Libya.  The first two are pet issues of the Left.  As for Obama’s enthusiasm about invading Libya . . . well, that continues to mystify me.  Obama’s silence has been most pointed and damaging when it comes to naturally occurring democratic movements within a despotic state.

It’s one thing (usually a stupid thing) for America to waltz in and take out a tyrant; it’s another thing entirely when the nation’s own citizens are yearning to be free, and are willing to face their own government’s guns to gain that freedom.  Under those circumstances, every person who believes in individual liberty should speak up — especially the president of the nation that has long represented itself as the land of the free and the home of the brave.  Obama, however, will not speak.

When brave Iranians challenged the mullahs, Obama was silent.  The mullahs tightened their hold.

When the Muslim Brotherhood filled the power vacuum in Egypt, Obama was silent.  A year of repression ensued.

When brave Egyptians challenged the Muslim Brotherhood, Obama was silent.  The country is now once again under a military dictatorship.

When brave Syrians challenged the tyrannical Assad regime, Obama was silent.  Had he spoken up sooner, a violent, bloody civil war — violent and bloody even by civil war standards — might have been avoided.  When the civil war took a chemical turn, Obama spoke up, only to retreat quickly when called to make good on his words.

Today, Obama continues this familiar pattern.  Ukrainian citizens, horrified at the realization that their government is trying once against to drag them back into the Soviet orbit (we know how well that went for them in the 1930s and beyond) are battling in the streets.  Obama is silent.

And in Venezuela, citizens worn down by the repression and poverty of Chavez’s and Maduro’s hard-core socialism are rising up in the streets.  Obama is silent.

Since WWII, people around the world knew that if they sought freedom and called upon America for help, America would help.  Sometimes the help was military, sometimes financial, and sometimes it was moral.

This aid wasn’t for America’s benefit — at least it wasn’t directly for America’s benefit.  To the extent that democracies tend to be the most peaceful form of governments, it was always to America’s benefit to encourage democratic governments around the world.  Nevertheless, America’s first motive was often altruistic.  Because we were the world’s most powerful free nation, we believed that we had a moral obligation to wield that power beneficently.  Sometimes America’s road to Hell has been paved with those good intentions, but our craven retreats from Vietnam, Iraq, and Afghanistan have all revealed that the post-American vacuum is often infinitely worse than the American occupation.

We’ve learned from our experiments in Iraq and, especially, in Afghanistan, that countries that have always had dictatorships, especially tribal and/or theocratic dictatorships, do not benefit from removing the existing dictator, because another one will always come along.  I therefore wouldn’t recommend interceding directly in a Muslim country ever again. Instead, we should be doing what Saudi Arabia did for Wahhabism:  establishing and funding institutions throughout the Muslim world that are dedicated to teaching the principles of freedom.  This generation may be lost, but perhaps we can save the next one and, along the way, save ourselves too.

Things are different, though, when the cry for freedom (or at least for less tyranny) originates within a country.  Had Obama immediately given moral support to internally grown democratic movements in Iran, Egypt, and Syria, he might have been able to turn the tide.  American moral support in Venezuela and Turkey would have fallen on especially fertile soil, because both are countries that have known some form of democracy.

Obama, however, considers that there is no such thing as beneficent American power.  To him, America’s strength is, by definition, malignant and destructive.  He truly believes that the Iranians are better off under the mullahs, the Egyptians under the Muslim Brotherhood, the Syrians under Assad, the Turks under Erdogan, the Ukrainians under Putin, and the Venezuelans under Maduro.  Judging by his complicit silence, there is no tyranny worse than that of being behold to the United States.