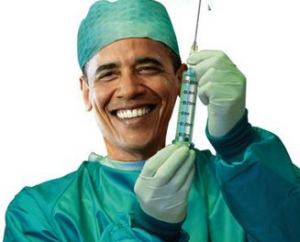 The Democrats have tried to spin this last point by saying that people will be freed of the drudgery of work and suddenly have time to innovate.  In fact, according to studies of people who were given that time to innovate (start businesses, invent things, etc.), the sudden time freedom made no difference:

More importantly, a thorough review of the available literature done by the RAND Corporation in 2010 concluded “On net, there appears to be little consensus in this literature on the existence or magnitude of the effect of health insurance on business creation.” To be sure, the same RAND report provides a new empirical analysis suggesting “that “entrepreneurship lock” for men is just over 1 percentage point relative to an annual base business creation rate of 3 percent.” But one way or the other, all these various studies represent efforts to infer the number of “entrepreneur-locked” individuals in the U.S.

Far more convincing is evidence of what happens after the introduction of universal or near-universal health coverage. For example, our OECD competitors all have had national health systems for decades.  Yet Edward Prescott, co-winner of the 2004 Nobel Prize in Economics, has observed that “entrepreneurship is much lower in Europe.” If universal health coverage truly had a demonstrable impact on individual willingness to take risks, this disparity seems counterintuitive. Admittedly, there are many other factors such as tax and regulatory policy that might affect these cross-national comparisons. So the most convincing evidence comes from the first empirical study ever to explore the actual impact of the a shift to universal coverage on entrepreneurship. This study of the Massachusetts health reform (“Romneycare” after which Obamacare was purportedly modeled) found the following:

The author finds significant and persistent suppression of new organization formation when controlling for organization size, sector and owner gender, and limited evidence of geographic displacement of firms across the New Hampshire border. While theory suggests mandatory insurance should reduce insurance costs and improve worker productivity, the author finds that the regulation has no significant impact on worker productivity and limited evidence of increases in insurance costs, and estimates the expected cost in terms of lost employment, sales to the local economy and tax revenue to in the majority of cases exceed the benefit.

Judging by my own life, this data doesn’t surprise me at all.  When vistas of free time open before me, I don’t innovate, I become inert.  More significantly, my brain slows down.  While I, as a busy person, can get 10 chores done in a day, as an un-busy person, I’m lucky if I get 2 or 3 chores done.  My flywheel has stopped spinning and I find it difficult to marshal the energy needed to overcome the inertia and get that flywheel spinning again.  It’s entirely true that, if you want to get something done, you should ask a busy person.

Moreover, if you want to build a better mousetrap, you should probably ask a busy person about that too.  It’s the busy person who has an incentive to simplify tasks.  It’s a busy person who engages with the world in a way that sows and fertilizes ideas in his mind.  It’s also a busy person who dreams of leisure and takes affirmative steps to create sufficient wealth to bring that leisure time about.  Enforced leisure lacks all of those incentives.  After all, if enforced leisure went hand in hand with creativity and innovation, Europe’s once-thriving cradle to crave welfare states would have resulted in the most dynamic economies in history, rather than in economic basket cases.

It’s true that there have always been people who, because of their great wealth, were able to indulge their passions in ways that benefit the world.  Reading about these people, though, one senses that they were so driven that, no matter their station in life, they would have affected the world around them.  Florence Nightingale, for example, had a calling that would actually have been easier for her to pursue if she hadn’t come from a fabulously wealthy, upper-class family.  Most inventions, though, come from busy people trying to figure out a better way (Henry Ford, Thomas Edison, John Rockefeller) or from people who were in a line of work that let their brain float freely to another line (Albert Einstein).

This is a sort of random, ill-thought-out post.  I’m confident in my core idea, but I’m not expressing it as well as I ought — probably because of the stultification of being couch-bound for so many days now.  Please chime in to support or oppose my ragged thoughts.