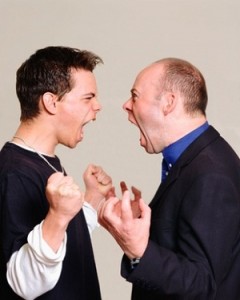 I said yesterday that we have to confront Leftists, because they will never go away.  Today, though, I got a perfect example of why it’s so gosh darn difficult to deal with them.  To understand this point, I need to take you back to the post I wrote about a killer who is about to be released from prison in Texas.

Here’s the brief run down:  In 1996, Bernie Tiede shot and killed 81 year-old wealthy widow Marjorie Nugent.  He hid her body in a freezer and spent the next few months running through her money before he was caught.  He confessed to the murder and was sentenced to life in prison.

At this point, we need to be clear about a couple of things:  First, Tiede is not facing the death penalty.  Second, no one is arguing that any type of prejudice played a role in Tiede’s conviction.  He was convicted the old-fashioned way:  he confessed to a premeditated murder and got the time for doing the crime.

Since Tiede’s conviction, a few things have changed:  Texas Monthly, a reliably Progressive publication, wrote about Tiede, saying he’d remembered that he’d been sexually molested as a child and that he revealed that he was a closeted gay man in East Texas.  The magazine article led to a 2011 movie starring Jack Black, Shirley MacLaine, and other big name stars.  And lastly, the prosecution and defense have agreed that Tiede’s recently-remembered childhood sexual abuse and the stress of being a closeted gay man in Texas were such that he couldn’t be held responsible for his well-organized murder and equally well-organized spending spree.  Tiede is therefore set to walk free.

I think this is a travesty.  It would be one thing if Tiede had been an innocent man railroaded because he was gay.  It’s another thing entirely saying that childhood molestation and being gay are mitigating factors to a life sentence for cold-blooded murder.  Mike Devx neatly parsed what happened:

“Stress made him do it”, is what this comes down to.

Well, the stress of being a soldier in war often leads to PTSD, and that stress must be worse than this stress.  So the way I see it, every soldier who has been or will be diagnosed with PTSD is now free to kill anyone they want to, and take the dead person’s money and live on it.  It’s only fair.

To get to my point about the difficulty of arguing with a Leftist, let me repeat the core matters at issue in the Tiede case:  Tiede is a self-confessed murderer who got a life sentence, but is about to be set free because he has successfully proven himself to be a member of the official victim class of the 21st century, relieving him of any responsibility for his evil acts.

So what does one of my reliably Leftist friends say when I politely (very politely) pointed out on Facebook that a cold-blooded, self-confessed murderer will get released from a life sentence because he was stressed? My friend says this:

I don’t know what to think. The movie made me feel sympathy for him, but I also think he wouldn’t have been released from his life sentence if he was black. Since our system is inherently racist, we must abolish the death penalty.

Did you see anything in Tiede’s story about either race or the death penalty? I didn’t. But in response to my politely expressed surprise about a murderer walking because it’s tough to be gay in Texas, she makes a bizarrely disjointed statement about sympathy for Tiede because of a Hollywood film, which she somehow contrasts to the fact that black people would be treated differently.  And then, having inserted race into the matter, she speeds ahead to announce that the death penalty is inherently unfair to blacks so the institution should be demolished.  I’m dizzy and confused.

Because I pick my battles, I don’t feel inclined to waste my time pointing out to this “well-educated” Progressive that, not only is her statement confused, random, and illogical, but she’s also wrong when it comes to data about blacks and the death penalty.  Because all of you care about facts, though, I’ll share the actual data with you:

2. [From ABC:] “Some states . . . for the same crime [are] three times more likely to sentence an African-American defendant to death. I think that’s very, very troubling. . . . Race is an issue.”

This is simply false. In murder cases, whites are executed much more frequently. Nationally, from 1977, when the death penalty was reinstituted, to 2011, the last year for which the FBI has compiled data, 64.7 percent of those executed were whites, but whites committed only 47 percent of the murders.

Nor do individual states stand out in the way this statement claimed. I went through the totals for each individual state over the seven years from 2005 to 2011, and none have the imbalance the ABC News panel complained about. Missouri was close, with five blacks and two whites executed. Only three other states, including heavily Democratic Maryland, executed more blacks than whites, and in each case only one more black was executed. (To see state-by-state data for a given year in this range, search for “capital punishment [insert year] statistical tables.”)

An honest evaluation has to start with explaining why white murderers are executed at a greater rate than black murderers.

Just like adolescents, Progressives won’t stick to the subject, ignore the facts, and are willing to repeat their unfounded statements ’til the cows come home.  It makes for very difficult arguments, because you have to ignore the red herrings and resolutely and repeatedly bring your errant Leftist back to the main issue.

UPDATE 2: The twitter image below, in my original update is false, says Sturmtrooper. I got pwned. Bad me! I did buy into my own biases, since it so perfectly aligned with the actual Facebook comment that a genuine friend of mine actually made.

The twitter picture is fake. The real moms demand action handle is @momsdemand note the D at the end. The one in the picture is momsdeman without the D.
If you look on the actual momsdemand twitter page they even mention it.

UPDATE: Another example of Progressive “logic” in action: 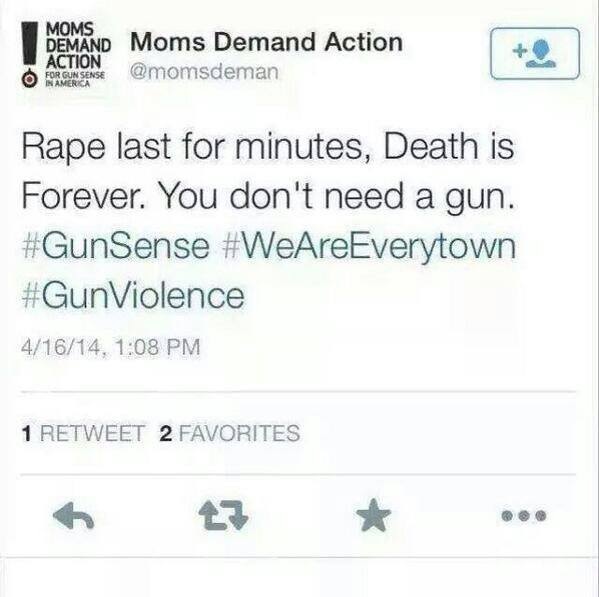