I’m still clearing out the inbox, but I’ve also got some current stuff in here, so I consider this a round-up. I’ll just dive in, with the stuff presented here in pretty random order:

Last Sunday, a New York Times op-ed addressed “Why People Don’t Donate Their Kidneys.” Sally Satel, the author, recognized that we don’t want to pay people for body parts, but thinks that she’s figured out a clever way around it by giving them non-cash rewards. Frankly, that strikes me as the same immorality, just wearing different clothes.

I suspect people don’t donate their kidneys for the same reason I haven’t: People like having a back-up system. They like knowing that, if one kidney fails, they’ve got another one available, instead of having to depend on the kindness of strangers. That investment in a back-up changes when the kidney donation becomes personal.  That happens when the kidney donee is a family member, close friend, or even a stranger who touched a chord in the donor. Without that personal touch, people kind of like to hang on to the spare.

Have you heard of Archbishop John Joseph Hughes, aka “Dagger” John, aka the first Catholic Archbishop of New York?  I hadn’t, so I found absolutely fascinating this City Journal article about the way in which he brought discipline and purpose to the vast cadre of lawless, self-destructive Irish immigrants who had been so deeply traumatized by the horrors of the famine in Ireland and the societal disintegration that followed in its wake:

Hughes’s solution for his flock’s social ills was to re-spiritualize them. He wanted to bring about an inner, moral transformation in them, which he believed would solve their social problems in the end. He put the ultimate blame for their condition squarely on the historical oppression they had suffered at the hands of the English, which he said had caused them “to pass away from the faith of their ancestors,” robbing them of the cultural heritage that should have guided their behavior. But that was in the past: now it was time for them to regain what they had lost. So he bought abandoned Protestant church buildings in Irish wards, formed parish churches, and sent in parish priests on a mission of urban evangelization aimed at giving the immigrants a faith-based system of values.

With unerring psychological insight, Hughes had his priests emphasize religious teachings perfectly attuned to re-socializing the Irish and helping them succeed in their new lives. It was a religion of personal responsibility that they taught, stressing the importance of confession, a sacrament not widely popular today—and unknown to many of the Irish who emigrated during the famine, most of whom had never received any religious education. The practice had powerful psychological consequences. You cannot send a friend to confess for you, nor can you bring an advocate into the confessional. Once inside the confessional, you cannot discuss what others have done to you but must clearly state what you yourself have done wrong. It is the ultimate taking of responsibility for one’s actions; and it taught the Irish to focus on their own role in creating their misfortune.

How do we respiritualize a society that seems, lately, to concern itself solely with sexual license? It can be done, you know. Hughes did it with the Irish immigrants. The Victorians (especially the Evangelical movement) did it as a response to the worst excesses of the Georgian and Regency eras. Presumably, we can do it too.

The Daily Mail’s profile of Lt. John Randall, the first member of the Allied troops to enter Bergen Belsen is a useful reminder that “Holocaust denial” means denying the reality of the past, one that was experienced by millions, witnessed by thousands, and proudly documented by its perpetrators. In this regard, it differs from “climate change denial,” which involves rejecting a predictive theory that, so far, has been wrong approximately 90% of the time.

Apropos that whole climate change thing, you can get a good insight here into the hoax that serial liar Michael Mann perpetrated with his famed hockey stick graph, a graph to which the Left still clings to “prove” that climate change is real.

When Hillary came to the Bay Area in early April, John, of The City Square, was there to record the protests. Should Hillary run in 2016, she will face a lot of opposition, based upon a long history of dubious, frequently immoral, and possibly criminal behavior. Benghazi is just the exclamation point to a long, unsavory career.

The reliably Leftist, tax-payer funded NPR just hired a new, reliably Leftist CEO. What I found so amusing was the WaPo’s article about his hiring, which expressed surprise and dismay that NPR had problems sticking to its budget (emphasis mine):

[Jarl] Mohn, who has a reputation as a turnaround specialist, will inherit an organization that has been battling persistent operating deficits. It is projecting a deficit of $6.1 million in its current fiscal year, or a little more than 3 percent of its projected revenue of $178 million. The gap between revenue and expenses led NPR to offer buyouts to its 840 employees in September, in an effort to pare about 10 percent of its staff.

Could it be that NPR has operating deficits because it knows that, unlike an actual business, its deficits are meaningless? A real business goes under when it has chronic deficits. A government-funded business simply gets more money from the government. And yes, NPR likes to point out that it gets a large part of its budget from corporate and individual donations, but the fact is, it knows that the government will always be there to bail it out.

The Left is all about its fealty to science . . . until that fealty clashes with political correctness. When that happens, it’s under the bus for you. In this case, the sinner is long-time New York Times science writer Nicholas Wade, who looks at differing genetic data in sub-Saharan Africans and reaches non-PC conclusions. His conclusions could be entirely wrong, of course, but Leftists won’t debate him, they’ll just erase him.  (Remember, on the Left, the debate is always over.)

As someone who believes in evolution, I’ve also assumed that certain tribes have, over the centuries, encouraged certain traits. For example, in societies where hunting prey (and running fast so as not to become prey) are necessary for survival, those who successfully passed their DNA down would have been the fast runners, not the slow. With the DNA inheritance, you would soon have a tribe composed of very fast people. Jews, when viewed as a tribe, have always centered their lives around the Bible.  It therefore makes sense that those with a certain academic bent would be most successful in passing on their DNA. The result would be that Jews would excel at tasks requiring an academic bent.  Even Hollywood is an example of genetic selection. For decades, starting in the 1920s, many of the most attractive people in America poured into that city. Most never ended up in pictures. Instead, they married each other and created generations of good-looking Southern California kids with straight noses, good jaw lines, and great figures.

In case you didn’t know, Ambassador Christopher Stevens wasn’t “murdered.” Nope. According to “journalist” and Democrat party shill Eleanor Clift, he died of smoke inhalation after a movie review ran amok. You and I are now thinking, “How can anyone still parrot that line after the revelation about the Ben Rhodes Benghazi email? She must be really stupid.” She’s not. We’re stupid. Clift understands the whole concept of the Big Lie, and recognizes that it will still work if you’re the party that controls the media.

I know nothing about football, but I posited yesterday that Michael Sam was going to be trouble for the Rams. Jazz Shaw, who does know something about football, agrees. Moreover, he does so for the same reason I gave: unless the Rams treat Sam like the crown prince of the game, they’re going to get raked over the coals in the media (which, after all, is their conduit to the money people pay).  As it is, the “re-education” has already started.

Ruth Wisse, one of the few conservative professors at Harvard, writes a powerful opinion piece about the closing of the academic mind. Today’s students will not speak out. They’ve been taught that they’re worthless (“check your privilege at the door”), and their professors are impenetrably wrapped up in their self-righteous and invariably vindictive Leftism.

I’ve stated repeatedly that one of the things that turned me away from my staunch pro-choice position was the pro-death attitude that permeates the abortion rights movement. Andrew Klavan, another former pro-abortion person, comments on the same thing, but more powerfully than I could.

and A Rotten Person Travels the Caribbean: A Grump in Paradise Discovers that Anyplace it’s Legal to Carry a Machete is Comedy Just Waiting to Happen

. He recently got interviewed over at “Divorced Girl Smiling” and, as you can probably guess, the interview is laugh out loud funny. I found especially amusing the bit about cats and high heels, in part because of this picture, which has been making the rounds on Facebook: 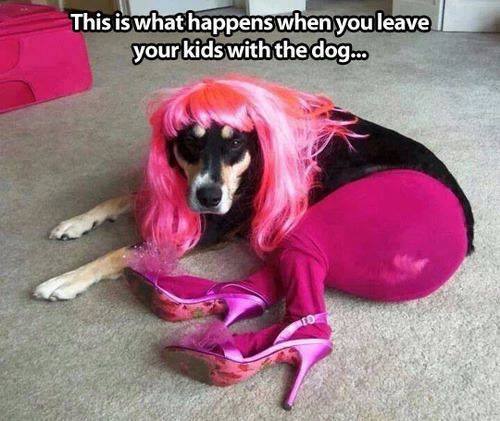 And finally, from Prager University, a short lesson about forgiveness. There was nothing new in it for me, but I liked how well-organized it was, and I especially liked the reminder that forgiveness is psychology important, not just for the person seeking forgiveness but, in certain circumstances, for the one doing the forgiving: