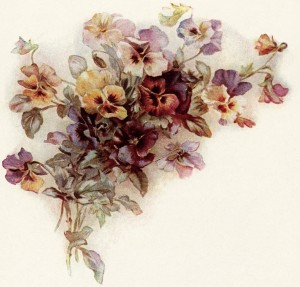 We had a productive long weekend, in that we made some smart big purchases courtesy of 4th of July sales. I can’t decide whether doing so was patriotic. On the whole, I’m inclined to think that anything I do right now to support the U.S. economy is patriotic. Yay, me!

And even more self-congratulatory huzzahs have to go to the incredible round-up I’ve got here:

America doesn’t have a gun problem; it has a Chicago problem. (Obligatory announcement: Chicago has some of the strictest gun laws in the country, not to mention decades of Democrat Party governance.)

“No, women, you can’t have it all,” says . . . the female PepsiCo CEO. The fault lies not with our society, but with our biology, and that pesky little thing about having children who instinctively bond to Mommy.

Selwyn Duke carefully walks us through the media’s endless obfuscation about the identity of a woman who stabbed a teacher to death in front of a class full of terrified five- and six-year-olds.

“Ebola” sounds like it should be some sort of lawn bowling game. Sadly, it’s not. Instead, it’s a deadly disease for which there is no cure or vaccination, and which is highly contagious if you’re unlucky enough to catch some of the victim’s bodily fluids (especially blood, which appears in prodigious amounts outside of the body when people die of a hemorrhagic fever). Even worse, it looks as if Ebola is primed to catch a plane to Europe or America sometime soon. If that doesn’t put the fear of God into you, I don’t know what will. My prediction, though, is that it makes its first appearance along the Obama-porous border to our south.

The VA always has the time and money for green projects and employee bonuses. It’s had less of either for the veterans in its care (and the law denies these vets access to Medicare and civilian physicians). John Hawkins relates the appalling story of an Iraq veteran, only 31-years-old, whose digestive system has broken down but who cannot get any care whatsoever from the VA, leaving him at risk of starving to death. John ends his post with suggestions about things the public can do to help Joe Geoghagan.

I have to say that Joe has my sympathy. I almost starved to death many years ago when doctors kept diagnosing me with stress ulcers, when I was actually unable to tolerate the Pill. (Which is why I know how toxic the Pill is and why I’m so opposed to laws that allow school nurses to give it to 12 year olds.) I then threw up non-stop during both my pregnancies. The man is suffering and needs help.

One of my Leftist Facebook friends has vowed to boycott Walgreen’s after having read a Bill Moyers article (to which I will not link) stating that Walgreens should be denied any voice in American politics because it moved its headquarters out of the U.S. It didn’t seem to occur to my friend that, rather than boycotting Walgreens, we should lower taxes so as to entice existing corporations to stay in America and new corporations to come to America. Otherwise, we risk becoming France.

Jonathan Turley is a Leftist who’s been mugged by reality. Surprisingly, considering his DemProg credentials, Turley (a law professor) has great reverence for the Constitution. He especially appreciates the balance of powers, something that forces the federal government into deliberation and compromise. He’s therefore shocked and (dare I say it?) seemingly disgusted by Obama’s insistence that he doesn’t need no stinkin’ Congress, a dictatorial pronouncement allied with the snotty taunt that Congress should “sue me.”

The Economist is famously unfriendly to Israel. Nevertheless, it finally seems to be catching on to the fact that the Arab world’s problems might be home-grown. It tags Islam as being at the core of the Arab world’s problems, but then foolishly pretends that its illiberal economic and social policies are somehow separate from Islam. Still, I won’t cavil too much, because it’s a start.

I told you earlier that my Facebook friends having concluded that the Hobby Lobby ruling will lead to an all-out war against gays. While these morons (pardon my language, but it’s true) are being useful idiots to the hard Left, there really is a war — a bloody war — being waged against gays. It won’t surprise you, of course, to learn that this war is Islamic in nature, and it’s taking place with increasing frequency on American soil.

David French perfectly encapsulates my approach, not just to law, but to all issues. It’s just that, in my mind, this approach was always inchoate and amorphous, so much so that I never could have expressed it as well as he did:

As a Christian lawyer — even when I was engaged in the “commercial” practice of law rather than the nonprofit, constitutional work I do now — I always drew moral lines around my representations decisions. I was not going to use whatever meager talents God gave me to advance or celebrate causes or principles I knew to be wrong. In other words, I discriminated. But not on the basis of race, gender, disability, or sexual orientation, but rather on the basis of the action or legal principle the case would advance. I’d happily represent anyone, gay or straight, in a commercial contract dispute. I would not represent anyone, gay or straight, who wanted to sue to make divorce easier or broaden the definition of marriage beyond the union of one man and one woman. I’d represent an adulterous cad if the state violated his rights to free speech, but I wouldn’t lift a finger to help him divorce his wife.

This distinction, between status and acts, or between and among different acts themselves, used to be a matter of common sense

Arabs in Israel like to eat their cake and have it too. This is not a good thing for Israel.

Here’s a matched set: Liberals hate America and the College Board tries to un-teach high schoolers about America, so as to perpetuate this hatred.

It’s funny to watch Jason Riley try to talk common sense to a HuffPo host on the subject of the damage Progressive laws have done to American blacks. The HuffPo host couldn’t be more civil, but he keeps falling into cant and illogical “factual” digressions, with a perplexed Riley gamely trying to translate him into some sort of logical framework to which Riley can actually respond. Also, and no disrespect to Riley, but Riley sounds just like a truly super smart Urkel.

I’m not a Peggy Noonan fan but, as I’ve noted before, when she’s good, she’s extraordinarily good — and so it is with this column about the peculiar (and peculiarly dangerous) Obama presidency. Since I don’t know if this is behind a pay wall (I’m always signed in to the WSJ), let me just give you a taste so you know what I’m talking about:

But I’m not sure people are noticing the sheer strangeness of how the president is responding to the lack of success around him. He once seemed a serious man. He wrote books, lectured on the Constitution. Now he seems unserious, frivolous, shallow. He hangs with celebrities, plays golf. His references to Congress are merely sarcastic: “So sue me.” “They don’t do anything except block me. And call me names. It can’t be that much fun.”

This is a president with 2½ years to go who shows every sign of running out the clock. Normally in a game you run out the clock when you’re winning. He’s running it out when he’s losing.

All this is weird, unprecedented. The president shows no sign—none—of being overwhelmingly concerned and anxious at his predicaments or challenges. Every president before him would have been.

Instead he seems disinterested, disengaged almost to the point of disembodied. He is fatalistic, passive, minimalist.

Sen. Jeff Sessions has issued a stirring call to arms demanding that we restore our border integrity and security for the benefit of America and Americans.

When you’re out of power, you develop solidarity with the guy next to you. Your long-term goals may be different, but in the short-term you both want power back. Things change dramatically when you suddenly achieve the power you want. All those former allies have the potential to become enemies, which is what’s happening between Michelle Obama and those charged with feeding America’s public school students.

What does it mean that the New York Times has discovered that Tom Steyer’s money is filthy dirty with coal dust? I suspect that, because his heart’s in the “right place” (i.e., supporting DemProg politicians), his money will never be too dirty for the Times.

I also wonder if the Times will report on the cooling trend seen in America’s climate data? Duh! Dumb rhetorical question. Of course the Times won’t.

I think James Cameron had one good move: The Terminator. Others think he made good movies up to and including The Titanic. Some will even praise him for Avatar. But when it comes to demanding that the whole world go vegan to fight global warming (except that the globe’s not warming; see above), can anyone take him seriously anymore? Never mind. Another dumb rhetorical question. He is now and will remain a DemProg darling for saying what they want to hear.

Indeed, Cameron’s climate views are now the only views the BBC will allow on air. I can no longer remember where I read it, but someone remarked that this is the same BBC that refused to give Churchill air time during the 1930s to talk about the rising danger from Germany and the terrible risks from British appeasement and pacifism.

It used to be that the only thing that the BBC had going for it was posh British accents. Now, with its egalitarian dive into the furthest realms of working class speech, it doesn’t even have that cachet.

This is your body on socialized medicine:

A report published by the Royal College of Surgeons and Age UK shows that [British National Health Service] rationing is being extended to cover life-saving operations on elderly patients. A study found that in large parts of the country, hardly anyone above the age of 75 was receiving surgery for conditions such as breast cancer and gall bladder removal.

I’ve complained here about the bag bans taking over Marin. First they came for the plastic bags, and now they’re zeroing in on the paper bags. They want to turn us all into crazy bag ladies, packing our groceries into petri dishes full of salmonella and e. coli. And of course you won’t be at all surprised to learn that the “scientific” justification for these often dangerous inconveniences is total bunk.

Please don’t forget Marine Sgt. Andrew Tahmooressi, who rots in a Mexican prison while our president does nothing. No, wait, I’m wrong. Tahmooressi rots in a Mexican prison while our president welcomes hundreds of thousands of illegal aliens, many Mexican, into our country, and then disburses them — drugs, diseases, crime, and all — throughout America so that they cannot easily be sent back home. My Congress people are useless pieces of Leftist detritus, so I have no way of making a change, but if you’re not stuck with the Feinsteins, Boxers, and Huffmans of this world, maybe you can do something.

The DiploMad has a his truly epic rant against Obama’s “misadministration” on our Southern border. You really have to read it.

Some moronic Leftist went into Hobby Lobby, played with wooden alphabet blocks, took a photo, and is now touted as a hero by Planned Parenthood. Can I just say, morons, that Hobby Lobby never denied that women should be able to get birth control, something that’s been a recognized right in America since 1965, when the Supreme Court handed down the Griswold decision?

I guess I can say it, but it won’t make a difference.  You can’t gain any traction with people who argue this way: 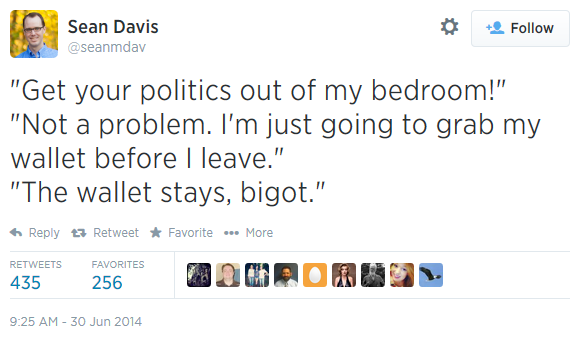